It's not a good feeling sitting in a Ferrari that's just died in the middle of a crowded roundabout, especially when you know that the bill for any repairs needed will end up on your desk. 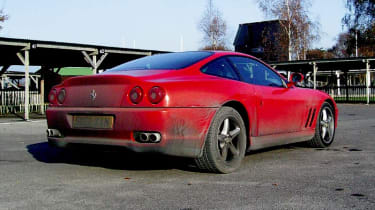 It's not a good feeling sitting in a Ferrari that's just died in the middle of a crowded roundabout, especially when you know that the bill for any repairs needed will end up on your desk.

I didn't have much time to work out the cause of the breakdown, though, as within seconds the rear-view mirror was filled with flashing blue lights. A police car just happened to be behind me at the moment the Ferrari faltered, and its driver soon marched over to enquire why I had decided to park in the middle of a busy roundabout on top of the M40 motorway. I had to agree with him that it wasn't the best place to stop, but as this was where the Ferrari had decided to pack up I didn't get much say in the matter.

As broken-down Ferraris tend to quickly turn into tourist attractions, he advised that he would stay parked directly behind me so people could run into the back of his Vauxhall rather than the 550. Meanwhile, I got on with phoning the rescue services - something which came as part of the Ferrari warranty.

Rescue took a little longer than expected, as the word 'Ferrari' seems to send most recovery companies into a panic as they try to remember where they put their special ultra-low loader made out of fag-paper-gauge aluminium - the only type capable of picking up a dead Ferrari.

About an hour and a half later a truck arrived, picking up 1700kg of broken Ferrari using the same method I use to get a fried egg out of a frying pan. After I was deposited back at home, the stricken car was taken on to Dick Lovett in Swindon.

Two days later I thought I'd better find out how things were going. 'Well, nothing showed up on the diagnostics,' replied Darrell Scarth, Dick Lovett's ever-helpful service manager, 'but we can't get any fuel pressure up.'

Another day passed and Darrell phoned to say I now had a six-cylinder Ferrari and I could have either the left or right bank of cylinders running, but not both at the same time. Then the next day, eureka! The cause of the fuel starvation was traced to the inertia switch that should only operate if you have a crash (when it cuts the power supply to the fuel pumps). Alas, not covered by the warranty. It had taken a while to identify that this £27 switch was the cause of the problem because it was only partially malfunctioning, one minute cutting the supply to one bank of cylinders, the next all 12. Unfortunately, working this out led to a £634 charge for labour alone.

When I questioned this amount they checked the timesheet and revealed I could have been in for a bill nearer to £1300 if I'd been charged for full workshop time, but as it took them so long to find the fault they felt they should absorb half the cost.

While the 550 was marooned in the workshop, they also tightened a hose clip that had recently started to weep coolant when the engine was hot. Unfortunately the offending clip was hidden under the inlet manifold, needing a further £423 worth of workshop time to remove and refit. In the end the total bill was £1206.90 - none of which was covered by the warranty...

That wasn't the end of the costs this month, either, as I also replaced all four tyres with a set of Michelin Pilots. I've changed brands as I want to find out if I can make a set of Michelins last any longer than the otherwise excellent Pirellis.

Initial impressions are positive. The harsh edge to the ride has disappeared, as has the tramlining, while the level of road noise transmitted into the cabin has been dramatically reduced too.

Let's hope they manage to last a little longer than the 5880 miles I got from the rear Pirellis as, with the warranty needing renewing and a service due next month, I ought to start making some savings. And I thought Christmas was expensive...