For £126,000, the choice between the first modern McLaren and the current entry-level car is a tough one 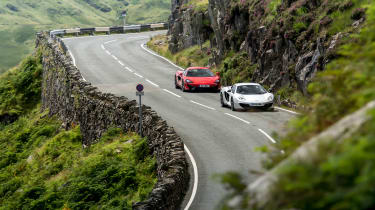 Just like the P1 and the mighty F1 long before it, the 540C breaks new ground for McLaren. Far from being the fastest or most expensive car to come from Woking, though, the 540C is actually the slowest. And the cheapest. It’s also the least powerful, and the first to have a sub-200mph top speed. At £126,000, it’s the entry point to the world of McLaren Automotive.

It is of the current line-up, anyway. If you look towards the classifieds you’ll find early, higher-mileage 12Cs trading for a little less than that. The cheapest cars dip below £110,000, but for the cost of the 540C you could snag a more recent example with fewer than 10,000 miles behind it. That rather begs the question: is your £126,000 better spent on a new 540C or a used 12C?

Of the 11 cars we’ve gathered for this McLaren megatest, the 540C and 12C certainly aren’t box-office. In fact, rubbing wheelarches with the likes of the F1 and P1 GTR, they are supporting cast at best, but when we slip away from the star-studded group and park the two nose-to-tail in the shadow of Mount Snowdon, I’m reminded that they remain hugely exciting and very special performance cars in their own right. 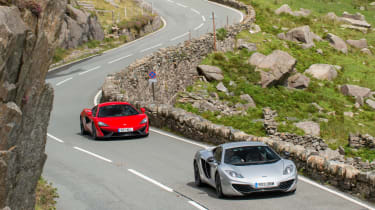 As they sit together in the summer sunlight, I can hardly believe the 12C (McLaren wisely dropped the ‘MP4’ part of the name in 2012) is smaller than the 540C. I check the spec sheets over and over. The 12C gives away a little in width and length, but there’s something about its distended arches that makes it appear a good bit bigger. In fact, those bulging arches and the wide, guppy-mouth grille give it the look of a squatting toad, which seems like a terribly unkind thing to say about a car whose styling I actually rather like, but I spotted the similarity this morning when it was hopping along in my rear-view mirror and I haven’t been able to shift the thought since.

I’m still not sold on the 540C’s styling. It’s the fussiness of the rear deck that troubles me – the purer, simpler 570GT that sits atop the Sports Series line-up is in a whole different league looks-wise – but at least the shape leaves you in no doubt that this thing has the performance to land you a custodial sentence in six seconds flat.

McLaren calls this particular 12C ‘Job 1’. As chassis no. 0001 it was the first production car to roll out of the McLaren Production Centre and it’s recently been added to McLaren’s heritage fleet. With the fast and flowing A4086 snaking its way through the Snowdonia National Park just a short hop and a skip from our base, I raise its elegant dihedral door and drop into the cabin, eager to drive a 12C again for the first time in four years.

The cabin architecture is instantly familiar from the 650S that replaced the 12C in 2014, but, somehow, it feels ten years old. There’s something about the sheen and sag in the brown leather that smothers the seats, and something about the smooth, perforated hide that wraps the steering wheel that really date this car. Worryingly, I’m put in mind of the 2002 VW Passat I used for a few months a couple of years ago. 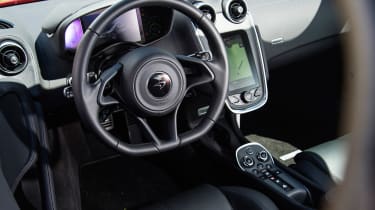 The thought doesn’t linger, though, and within a few rotations of those big, spindly wheels, any unflattering comparisons with leggy German workhorses couldn’t be further from my mind. It’s the engine that stands out first. This 3.8-litre twin-turbo V8 serves in one guise or another in every McLaren Automotive car, but here it feels particularly sweet. Typically, it needs 3500rpm before anything significant starts to happen, but from there it rips hard through the mid-range before coming to life in the final dash to the 8500rpm red line. The 12C feels monstrously quick in a straight line, but it’s the energy and fizz of the engine at the top end that steals my attention. There’s some character to the soundtrack, too – a sharp edge that tears through the air behind you.

The second trait that stands out is the car’s remarkable ride quality. The 12C, along with every other Super Series model, uses McLaren’s ProActive Chassis Control system. It features conventional double wishbones and coil springs with hydraulically interconnected dampers, but no anti-roll bars. The idea is to decouple ride from handling, giving both a comfortable car and an agile one.

The ride quality really is impressive, but even when you ramp the chassis into Sport or Track mode, you’re left isolated from the road surface. The consequence is that you always feel as though the car is floating above the road rather than keying itself into it. It can be spooky at times. Later Super Series cars make much better use of the ProActive Chassis Control system, sacrificing a little ride quality to give a much more connected feel, but this early 12C can be unsettling at times.

That’s compounded by the very light, similarly disconnected steering. The 12C is fantastically fast along a road and it grips very hard, too, but it always keeps itself at arm’s length. That all makes it feel quite like a mid-engined GT car, one that makes a priority of comfort over that instinctive, indefinable faith that a really great supercar imparts upon its driver.

All Sports Series cars use an anti-roll bar arrangement and for my taste that gives the 540C a more intuitive sense of connection to the road. I find myself second-guessing the car far less often, which makes it much more rewarding to drive quickly than the 12C. The 540C has a less aggressive chassis setup than the brilliant 570S (see right), having been tuned to be more comfortable in everyday use. It rides every bit as well as you could ever need a car of this type to ride, then, but the trade-off is that it gives something away to the faster, more focused model. 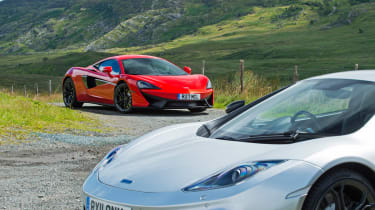 Unlike the older car, the 540C steers brilliantly. In fact, the 12C and 540C bookend modern McLaren’s journey through steering feel, from light and vague to direct and detailed. The 540C gives the impression of being a much more evolved machine than the 12C in just about every meaningful way, which demonstrates the meteoric rate of progress achieved at Woking in just a few short years.

Naturally enough, the 540C feels like the much newer car from within – its cabin feels more tautly screwed together – but this particular car’s interior spec really betrays the fact that it’s an entry point. Covered entirely in rough black leather, the cabin feels dour and uninviting, but we know from the 570S and 570GT that this cockpit can be one of the most attractive in the business.

Where the older car really shows the 540C up, however, is in the engine bay. The 540C’s V8 is rather flat at the top, with a much less exciting soundtrack. If the 12C’s motor makes us realise that turbo engines don’t have to be uninspiring, the 540C’s reminds us they very often are.

In the greater context of McLaren Automotive, what defines the 540C is that it’s the cheapest and slowest model to date. Those are not things you’ll hurry to brag about at the pub. The 12C, however, will always be remembered as the first car of the McLaren Automotive era and there’s something quite significant – almost poignant – about that. It’s a significance that will only be compounded as the company’s heritage grows richer and more illustrious.

With the shadows lengthening at the end of an intriguing day, I’ve got a very clear preference between the two cars. The 12C’s story is the better one. But, engine aside, the 540C’s driving experience is more immersive, and in the case of the mid-engined supercar, that really should be all that matters.