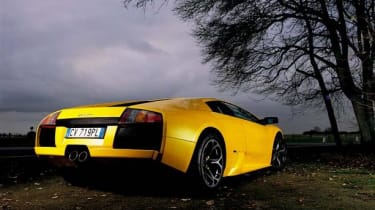 'Er, that's probably enough,' pipes up deputy editor Bovingdon from the passenger seat. We're about to run out of time on the Bedford Autodrome's West Circuit anyway, so what Bovingdon is actually saying is, 'Stop. I want to get out.' Can't say I blame him. We brought the 2006 model-year Murciélago to the Autodrome to set a lap time and to see how its new carbon-ceramic brakes would stand up under sustained pressure. The brakes, now available as a £7780 option, coped effortlessly. Bovingdon didn't. Mind you, on the opening lap, before I'd even cracked the V12's throttles wide open, I did spin the Murciélago twice... In no way was this me getting revenge for the fact that while I get a couple of wet December days with the '06 Murciélago, he gets to fly to Miami to drive the new Gallardo Spyder - I was as surprised by the spins as Bov. Driving supercars in exotic locations is a thrill, but there's nothing like opening your front door on a dull Wednesday morning and finding your driveway taken over by a full-on, screaming yellow supercar. Italian-registered, left-hand drive and sporting pearlescent yellow paintwork and dark grey alloys (two other options newly available on the '06 coupe), the Murciélago looks very like the Gallardo SE that came close to winning our recent Car of the Year contest. Indeed, you can't help wondering if the arrival of the 500bhp-plus Gallardo makes the 570bhp Murciélago superfluous. It's the 'little' Lambo's horsepower battle with the Ferrari F430 that has seen its V10's output raised to 513bhp, and while this is still over 50bhp down on the Murciélago, the fact that its output now starts with a five means a psychological line has been crossed. It also means that its power-to-weight ratio lies uncomfortably close to the slightly heavier Murciélago's. It would be a mistake to write-off the Murciélago, though. The crisp-edged, rakish Gallardo is dramatic and modern, but it takes most of its styling cues from its big brother, which, to my eyes, remains the original and best. The Murciélago is a more generously proportioned, softly-surfaced sculpture, punctuated with mesh grilles, slats and air scoops. Popping open a scissor door is almost guaranteed to draw a crowd. In short, it's what a supercar should look like, and when you've clambered over the wide sill, settled yourself at the pointy end of this wedge and turned the key, the sound of 6.2 litres of V12 erupting and then idling busily behind you confirms its status as a fully paid-up member of the supercar elite.

Or at least it used to. The '06 model is much, much quieter. The twin bazooka tailpipes look the same, but the exhaust system before them is new - and it muffles the V12's voice to the point that you wonder if you've gone partially deaf. Proof that you haven't is there in the shape of the multiple warning bongs and chimes that almost drown out the aurally castrated V12 - door open, key in ignition, seatbelt undone, shirt not buttoned-up properly... This e-gear automated manual won't let you select a gear if the door is open, so how are you expected to see where you're going, or look cool sitting on the sill to reverse it into a parking space? It seems that VAG's efficient, politically correct homologation engineers have been through the Murciélago in thorough fashion. It's a relief to find that from the driver's seat the Murciélago's character and appeal remain intact. Inside, the sound of the engine's exertions is largely undiminished, and the big V12 remains a mighty, energetic and stimulating force at your back, climbing to its red line with an epic, ever-changing soundscape that finally hardens and resolves for the stomach-flipping lunge to the limiter. The Gallardo's V10 is a fine engine, but an extra pair of cylinders makes a big difference. The Murciélago's driving position feels good but, after so many miles in Gallardos, you notice more quickly that it is slightly compromised. You occasionally brush your knees against the underside of the fat steering column, and while the seats and pedals are aligned, the instrument binnacle sits slightly off-centre. There's no denying that the Murciélago feels intimidatingly wide and heavy, but equally it takes only a few miles to appreciate that it rides typically bumpy British roads with great poise, delivering plenty of feedback through the small, meatily-weighted steering wheel. However, reflecting its rear-biased weight distribution, its front end doesn't feel as keyed in to the road surface as a Gallardo's, and although it too is four-wheel drive, on wet, greasy roads the traction control frequently reins back the engine. In the dry, Murciélagos are faithful and exploitable, with high levels of grip and great composure - back in evo 076, the range-topping Lambo edged a win over the front-engined Ferrari 575 HGTC and Aston Martin Vanquish S. Shiny, slick UK roads would make any of them a handful, but the Murciélago's traction control seems intent on preventing the V12's massive torque inducing any slip at the rear. In truth, this is no bar to enjoying the Murciélago. Once you're comfortable with its size, you can drive it cross-country at a spectacular pace. Naturally, it prefers wider roads where the glorious V12 can be stretched, but it's surprisingly effective on narrower stuff, the engine's instant delivery punching it past slower traffic given the smallest straight. And when you do find a long, dry straight stretching out before you, the V12 responds with a sustained and deep-chested ferocity that even the Gallardo SE can't match. It's still the daddy. When I arrive at the track for our half-hour slot, it has been raining. We attach the test gear, Bovingdon climbs aboard for the first time and we scud out onto the sodden track, helmets on, traction control off. 'Hell, it's fast!' is his first comment when I wind up the V12 a little down the back straight. I brake and turn into the second-gear Beckham Chicane, and as we pass the apex the back end is moving. A fraction later I realise that it's not going to stop moving. We spin. I was expecting the Murciélago to be a handful, but I thought power oversteer would be the issue. It's mass that's the enemy, I confirm, as I spin again at Tower. On the road, pushing the accelerator early on a wet roundabout causes the front-end to run wide, but we're way beyond that, up to a pace where the whole mass of the car is energised. It's a delicate balance, keeping the front from washing out in the tightest turns and trying to be smooth enough to stop the rear overtaking us in the faster stuff. Braking is strictly in a straight line and all done before turning in. Four exhilarating, fade- and spin-free laps later, we've bagged a best lap of 88.70sec on the still-damp track. That's just a few tenths shy of an Aston DB9 in the dry, which is quite something. What finally causes Bovingdon to cry enough is when I Scandinavian-flick the Murciélago at Tower (for the photographer, you understand), sending us into a third spin. The Gallardo is a much more approachable, driveable 500bhp supercar, no question, but the Murciélago is more of an event, more dramatically proportioned and styled, and an utterly absorbing drive. Yes, it's trickier on the limit, but you'd never go there on the road and nor do you have to in order to appreciate its fine ride and engaging dynamics. The optional carbon brakes perform brilliantly - smooth and progressive at low speed, sensationally effective and fade-free from massive speed. My only complaint would be that for £175,000 the Murciélago really ought to have them as standard.