A McLaren supercar has never been more cosseting or well-built, but a true GT this is not. It doesn’t mean the package is not appealing though 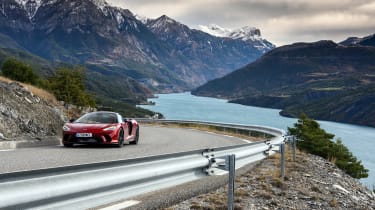 Have you got New McLaren fatigue? It seems many people have and it’s fair to say there are times when it feels like a new model or variant is let into the wild from Woking on a weekly basis. Me? I understand the concern of owners over residuals and I also sympathise with the view that it’s hard to be terribly excited about the newest McLaren when there’s likely to be a lighter, faster one along any… second… now. But the flip side is that the sheer turnover of models – all made out of the same pot of ingredients – has honed them to a fine edge. The 600LT is the reigning evo Car of the Year and rightly so. It’s simply brilliant.

But this is a bigger stretch. The new GT is, according to McLaren, a real, proper honest-to-goodness gran turismo. Comfortable, refined, luxurious and probably capable of carrying at least a dozen sets of golf clubs or several pieces of tailor-made luggage of questionable taste. So can a mid-engined, supercar-shaped car made out of the carbonfibre bones of searing supercars really be a GT? Or is it just a softer, less focused, less exciting supercar? 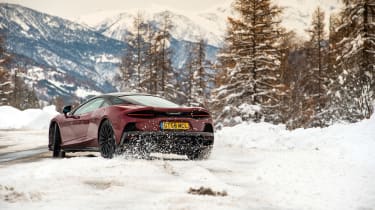 Can you guess? Of course you can. Carbonfibre monocoque (here dubbed MonoCell II-T, the T standing for Touring), aluminium double wishbone suspension and all that other good stuff. Again… I understand this level of perceived commonality is annoying to some, but taken in isolation it’s hard not to be impressed with the attributes they all contribute towards: a weight of 1530kg (for comparison a DB11 V12 is 1875kg, a 911 Turbo S 1675kg), a suspension system capable of delivering exceptional roll stiffness with superb ride quality, and an incredibly stiff structure to allow precise tuning.

New for the GT is what McLaren calls Proactive Damping Control, which uses sensors to proactively prime the dampers for irregularities in the road surface, softening the ride when required, but without compromising overall body control. The GT does not use the 720S's hydraulically cross-linked suspension, rather a more traditional combination of coil springs, adaptive dampers and anti-roll bars.

Perhaps more important for the GT is the much-improved luggage capacity across the front and rear compartments, which amounts to 570 litres, the chasing out of unwanted noise with revised wheelarch liners, NVH material and things such as new seats (thank goodness, as the ‘Comfort’ seats in the 570S and 720S are pretty awful), plus superb front-end clearance and a monster 1200W Bowers & Wilkins stereo. Lots of work has been done on engine noise to create a more GT-appropriate soundtrack, too. 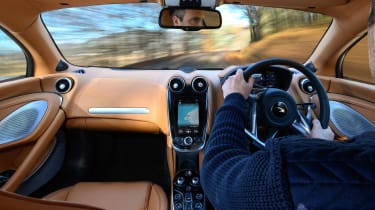 Different. No, genuinely. Of course, there’s a lot of familiarity in here. The look and feel, the wonderful view out, the lovely sense of supple agility that always pervades McLarens. However, the engine response is markedly changed and the strong, torquey delivery makes for effortless progress without the sheer unhinged lunacy of a 720S or even a 600LT. It’s effective, addictive even, but there’s a quieter, more grown-up vibe. Allied to a remarkably calm, spookily supple ride and the more measured steering response, the overall effect is that the GT remains quite obviously a McLaren, but one with a calmer, more subtle personality. I won’t pretend I don’t miss the laser precision of the 720S, or the frenzied bolt of power as the revs rise, but I suppose most GT owners won’t be jumping between the two.

It trickles through town easily, the brake actuation is smoother, road noise is soothed away (to be replaced by some suspension noise, but I guess you’re always chasing something) and on the French autoroute it’s an extremely civilised place to be. Does it tick all the GT boxes? Perhaps it lacks the bruising, indomitable, relentless feel of something front-engined and heavyweight – it is still obviously a McLaren, and therefore never relaxing in the way a Bentley Continental GT can be. But in terms of actual capabilities, it’s on the money.

So, away from the autoroutes do those supercar genes elevate it as a driver’s car, too? Initially the answer is a bit of a surprising ‘no’. On the faster sweepers of the Route Napoleon the GT feels fluid, fast and pretty nimble, but there’s no question it lacks the tactility and sweet, lightweight feel of a 570S. As with other McLarens you can adjust the powertrain and handling settings with two rotary switches to select Comfort, Sport or Track mode, but here the set-ups are considerably backed-off. For the suspension, Comfort feels slightly floaty and disconnected, and the body control just isn’t tight enough. Fair enough.

Sport mode is much more like it, but even so, there’s a slight disconnect between input and action and nothing like the unerring accuracy of other McLarens. Much to the annoyance of the dynamics guys I ended up driving quite a lot in Track mode, just to sharpen everything as much as possible. To be fair, the French roads were extremely smooth and on the few lumpy sections Sport felt much more dialled in, so I suspect in the UK this mid setting will be the one to use.

In the tighter stuff the GT occasionally groans under the weight of 1530kg. Literally in the case of the brakes. Our test car didn’t have the optional ceramics and the standard system is right on the limit of what’s acceptable for such a quick car. The pedal goes long pretty quickly and doesn’t come back for some time. And boy do the front tyres get a workout! The GT just doesn’t have the crispness of turn-in you’d expect and can understeer a surprising amount if you start really going hard. In some ways it reminds me of an Elise with narrow front rubber, where you always have to be mindful that you don’t overload the front end, working instead to shift the weight balance and get the nose turned in before being too greedy with the throttle.

However, it’s also extremely difficult to look at the GT’s shape, hardware and badge and not judge it as a supercar, pure and simple. Maybe that’s unfair. The GT is meant to be a, um, GT and so expecting 720S levels of grip and control is unrealistic. Is it sharper, more composed and more fun than a DB11 AMR? I’d say so, yes. And whilst that slightly softer body control makes for a calmer, less frenzied and less precise gait, it also provides quite amazing progression. Once you’ve learnt to give the front tyres a fighting chance on turn-in and got the engine on boost, the GT can be made to slip and slide in almost slow motion. Small, efficient slides or big, smoky monsters for the cameras – the GT can do it all.

In the end, how you judge the GT is a question of philosophy. If you think a grand tourer is front-engined and all about big, muscular character then this thing is not for you. However, I came to enjoy its mix of restrained supercar aesthetic, fluid dynamics and ultra-progressive handling balance. If they could knock back a bit of the understeer, tighten up the body control just a shade… Yeah, the development guys groaned when I said the GT S should be great, too. 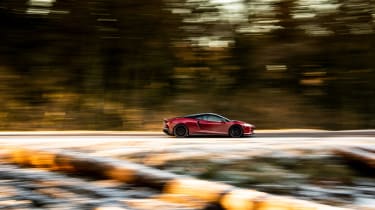 At £163,000 the GT is right on top of the V12-powered Aston Martin DB11 and Bentley Continental GT on the more traditional side of things and a good chunk more than the Audi R8 Performance or 911 Turbo S on the useable sports car/supercar side. Of course, it’s also faster, lighter, made from more exotic materials and certainly feels as special as even the Aston or Bentley in its own way.

So whether you’re wilting under New McLaren fatigue or not, there’s no question that the GT makes a strong case for itself. For me it doesn’t quite capture the do-anything-but-still-tear-your-face-off excitement of the 911 Turbo S, nor the old-school glamour and character of the DB11. However, it does mix and match elements of the two into something with its own identity.

A true GT? Not as we know it. But I think it just manages to avoid feeling like a dumbed-down supercar, too. A Ferrari GTC4 Lusso T might speak more to all those south-of-France gran turismo fantasies and fit a couple of extra passengers, too. But on the roads above Cannes, Nice and St Tropez, the McLaren is more at home. Question is, which part of the journey you want your GT to shine most brightly on: the long, straight and sweeping meat of the journey or the fun bit near the destination?