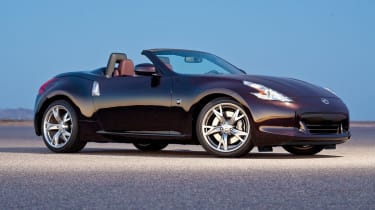 It’s probably fair to say that Nissan’s game plan for turning the old 350Z coupe into a roadster didn’t require the services of a supercomputer. It must have gone something like this: people like the 350Z, people like roadsters – let’s cut the roof off. Impeccable reasoning and, sure enough, the resulting 350Z Roadster had a strong ‘what’s not to like?’ appeal while singularly failing to contribute anything interesting to the evolution of soft-top sports cars or, indeed, the repertoire of the butch ‘n’ beefy 350Z beyond unlimited headroom.

Same routine for the new 370Z? I feel slightly guilty even asking the question. This time, as if to bury the memory of its rather perfunctory job on the 350, Nissan has put in the extra effort right from the start, developing the Roadster alongside the coupe with two main objectives in mind: first, to give the new car an identity and look clearly differentiated from the coupe’s but with no dynamic compromises, and, second, to take the fight to the competition, Porsche Boxster and Mercedes SLK included. So it’s 45kg lighter that its predecessor, 45 per cent stiffer in torsional rigidity and sits on a 4in shorter wheelbase.

The fact that it looks so confidently muscular and purposeful can’t hurt its cause, either. According to Randy Rodriguez, the designer who penned the original sketches of the 370Z, the final design proposal for the coupe was chosen partly on the basis of it morphing gracefully into a convertible, and the wisdom of that is clear to see. The 370Z’s shorter, squatter proportions lend themselves perfectly to the roadster brief, and the way the broad, curvy rump sets off the longer, more steeply raked and now fully automated, self-latching hood (high-quality lined fabric rather than the 350’s vinyl) nails a sense of aesthetic cohesion that’s at least as good as anything in the class.

The style reflects the car’s tough, unfrilly personality to a tee. Although the 370Z Roadster can be specced with all kinds of gizmos – target customers are said to be ‘technically savvy’ and appreciative of things like in-seat ventilation and Bluetooth streaming – it’s the job of Nissan’s prestige brand Infiniti to project the company’s smooth and sophisticated side, leaving the 370 to fill the unfettered sporting role in fine two-fisted style.

Willing allies in this are the lusty, urgent-sounding naturally aspirated 3.7-litre V6 that gives the coupe its Porsche-baiting pace, and the short, punchy action of the six-speed manual gearbox fitted to our test car (a seven-speed auto is optional). With the hood down, the low-slung V6 sounds angrier still under full throttle, but its singing voice shrinks to virtual inaudibility beneath the less than successfully repelled buffeting from the wind in the cabin and the roar from the tyres on coarse surfaces. Hood up – an intricate 20-second dance of metal panels, hydraulic struts and folding fabric – refinement levels creep up to near 370Z coupe levels, though that isn’t saying much.

Much more impressive are the stiffness of the body – barely a trace of structural vibration on broken tarmac – and the tenacity and stability of the chassis when pushed to the limit. No, it isn’t quite as sharp and clean as the coupe’s, but it is just as agile and grippy, and the meaty, feel-full steering is equally satisfying to use when scything through a series of esses. The Roadster gets unique seats which, if anything, are more comfortable than the coupe’s, and its ride is slightly more supple, too.

No, the 370Z Roadster doesn’t have the rounded chops and dynamic finesse of the Boxster, but it is much, much closer than its predecessor, and a more entertaining steer than the SLK. Arguably, it looks better than either. It’s better value for sure.