When it was launched in 2008 the Nissan GT-R set new standards for performance at its price point. Its cost  has steadily risen to a shade over £80,000 over the years, but the GT-R still offers an unrivalled blend of pace, driver involvement and everyday usability.

Somehow, the GT-R earned a reputation for being synthesised and uninvolving, mostly among those who had never driven one. The truth is that the GT-R rewards and excites its driver like nothing else, combining massive straight-line performance, huge cornering grip and endlessly adjustable dynamics to deliver a unique driving experience. Alterations to the 2017 GT-R have made it a more refined and comfortable car than ever before. However, it still retains the performance and excitement we’ve come to expect from a GT-R.

Despite a significant update to the 2017 car’s styling, including a new front, an improved infotainment system and a more sophisticated interior, the GT-R doesn’t feel as cutting edge as its rivals. Buyers stepping across from a Porsche 911 will think the interior design to be clumsy and the materials low rent. But that doesn’t detract from what is still a very usable and very exciting car. 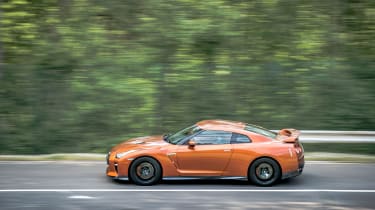 > Performance and 0-60mph time - An already blisteringly fast car, the 2017 car gets more power. The Nismo version is even faster still.

> Engine and gearbox - A 20bhp increase for the 3.8-litre twin-turbocharged V6 for 2017. Shifts from the dual-clutch auto are as rapid as ever.

> Ride and handling - Slightly more mellow than before, but still capable of seeing off virtually any other car on the road. Notable improvements to the ride, and R mode is no longer unusable when the going gets bumpy.

> MPG and running costs - Be in no doubt, the GT-R will be expensive to run. Not just on fuel but also insurance, and it'll need more maintenance than the average Nissan too.

> Interior and tech - Improvements made at the last update have bestowed a certain quality on the GT-R's cabin that was absent before. It's a welcome change.

> Design - The GT-R is best described as big and bold. Its looks aren't to everyone's tastes, but its vast size makes its performance even more impressive.

The return of Godzilla after a seven-year absence proved to be well worth the wait when the new Nissan GT-R landed on UK shores in 2009. The technological tour de force that is the R35 GT-R comfortably became the performance yardstick in the alluringly accessible £50k price bracket. Shortly after the GT-R’s UK release, the price began to creep up in £10k increments after each iteration emerged from the factory. The short lived bargain status hasn't totally abandoned it today – even at a tad over £82,000 there’s nothing else that produces the equivalent on-road performance this side of six figures.

Over the course of the GT-R’s  life, Nissan has gradually engineered out some of the car’s hard edges to bring about the higher degree of civility that tends to be asked of modern day performance cars. So, the B-road bludgeoner is available in five trim levels to satisfy all needs, each more expensive than the last, starting with the entry level Pure edition. The closely priced Recaro and Prestige trims - around £85,000- offer upgraded seating and a reupholstered cabin – the latter allowing for a larger variety of colour schemes.

The GT-R Track Edition elevates the sticker price to just shy of the £100k mark with a string of mechanical modifications: lightweight wheels, Bilstein DampTronic suspension and increased rigidity supplement its track ability. The £150k plus Nismo version sits atop the GT-R throne these days, its driver tied into a bespoke, carbon-backed Nismo seat. From there you can wind-out the uprated V6 that produces more power and torque from behind the carbon fibre apron - one of many external parts recast in the lightweight composite.

Price comparisons involving the Nissan GT-R serve up cars many leagues below it in performance terms. Despite the nigh-on £50k premium Its truest rival is the Porsche 911 Turbo. Showing a similar technical make-up and integrating a bottomless list of driver aids, it has the same physics defying a-to-b pace as the GT-R.

The Nismo GT-R is more of a rival to Porsche’s 911 GT3 RS and the Mercedes-AMG GT R. All three are competent on the road but really excel on the track.