An all-wheel drive 911 might be useful in the snow and ice, but is 4x4 worth it in the wet? 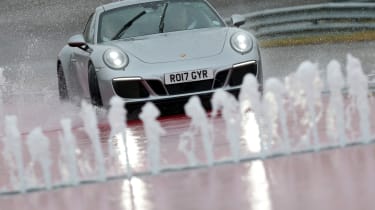 This year, 2018, marks 30 years of all-wheel drive Porsche 911s. Porsche has been dabbling with four-wheel drive for longer than that though; Ferdinand Porsche developed an electric car with motors at each wheel, and then, in 1947, Porsche built the Type 360 Cisitalia, a supercharged V12 racing car that could be switched between two- and four-wheel drive.

The ‘80s saw more all-wheel drive Porsches: a 911 Turbo Cabriolet concept, the Type 953 Paris-Dakar winner with engageable four-wheel drive and then, of course, the Ferrari F40-rivalling Porsche 959 in 1986. Before, eventually in 1988, it created a four-wheel drive version of the 964 911. Porsche used a similar drive system to the one found in the 959, with two electronically-controlled clutch packs either side of a planetary gear set as a centre differential. The clutches then vary the amount they lock and so vary the amount of drive sent to each axle. The rear diff worked in the same way, helping distribute drive across the back axle.

> Read our review of the current Porsche 911 Carrera range

Of course, the 911 never, particularly, had a traction problem thanks to its engine position. Utilising that advantage, though, is only really possible at high speeds – the 911’s numerous race and rally wins prove it is possible. But at road-going speeds, four-wheel drive traction on slippery surfaces is unbeatable. That’s why Porsche gave the 911 four-wheel drive. 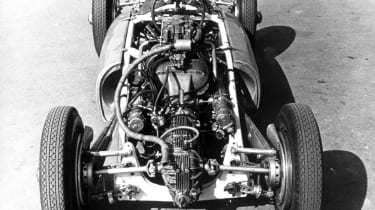 Not only was it physically quite easy, there’s an unobstructed path from the 911’s gearbox to the front axle thanks to the car’s rear-engined layout, but also adding a little extra weight to the front axle was hardly going to cause many issues for the tail-heavy, nose-light 911. Porsche always touted the 911 as an everyday, totally-useable sports car and four-wheel drive opened it up to an entirely new market where slippery, icy conditions ruled out most performance cars completely.

And that’s kind of the point of the four-wheel drive 911. It’s not better than a two-wheel drive car, it’s just different and, for some, it's the only reason they can choose a 911 or any sports car.

At almost every stage in the 911’s range there’s both a two- and four-wheel drive version, which one you choose depends on what suits you and your environment. There’s the Carrera 2 and 4, and GTS versions of both of those. As the 911 encroaches into supercar territory, you can have rear-wheel drive GT3s and GT2s (if you can get your hands on one) or all-wheel drive Turbos. There is no right and wrong answer in the 911, two-wheel drive or four-wheel drive debate.

So how do you decide? If you get lots of snow and you want to drive all year round, you need four-wheel drive, naturally. But if you live somewhere that’s frequently wet and very occasionally sunny and dry – I don’t know, say, the United Kingdom – where four-wheel drive might be useful, but not absolutely necessary, is it worth it? 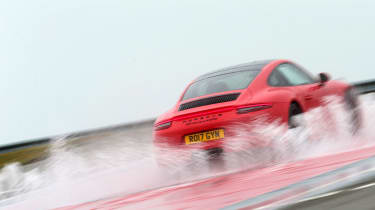 Porsche’s Silverstone Experience centre has all the facilities to help identify the differences. The Ice Hill, a plastic-coated incline with jets of water constantly dousing the surface, shows how the Carrera 4 GTS is easier to keep pointing forward, how the front axle helps pull the car straight under power, and how much faster you’re able to cover the gradient. The Skid Pan, with a similar surface to the Ice Hill (only it’s flat and a plate upsets the rear to induce a slide), again shows how much more capable the four-wheel drive car is when it’s very slippery.

It’s the road-like perimeter circuit that’s most illuminating and most relevant. The surface is wet because, unsurprisingly, it’s raining, the corners vary from short and tight, to long and gently curved. It’s also narrow with grass verges and certain sections are oddly cambered, just like a UK road. Only it’s smoother and you don’t have to worry about on-coming cars, meaning you can be far, far more committed.

First the Carrera 4 GTS, on the wet circuit it behaves just as you’d want a well-sorted sports car to, there are no surprises. Brake hard and in a straight line, it’s stable and secure, but start to take liberties and lean on the brake pedal later and later and you can liberate an extra degree agility at the entry to the corner. If you’re tentative with the throttle you can cleanly pull away from a bend, but bigger, more obvious movements of your right foot get the stability control light flashing – not in a scary way, in the way that makes you want to reach for the traction control button. There’s none of the typical, super-tied down behaviour that lots of four-wheel drive cars are known for, it’s fun and involving, yet predictable and safe. 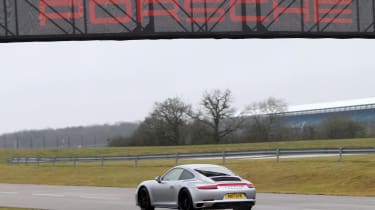 Sitting in the two-wheel drive car is eerily similar. Not that it shouldn’t be, it is practically the same car after all, but there are absolutely no audible or visual clues to help you readjust to anything new. But, don’t be fooled, it is very different.

The 4 GTS didn’t feel like it understeered much, but the 2’s front-end is so much sharper. It jolts into a corner with far more enthusiasm, but that energy needs taming with deft and precise use of the controls as it can easily turn into oversteer. But that means it’s forever adjustable, manipulating the car with the throttle, shifting the weight to aid turn in or traction can be done with just the smallest of inputs – you navigate every corner, from entry to exit, close to the car’s limits of grip.

The Porsche Experience Centre in the wet certainly magnifies the differences between the two cars. Every minute movement from your hands and feet matters in the two-wheel drive car, your room for error is so small compared to Carrera 4 GTS. The two-wheel drive 911 certainly wouldn’t feel quite as edgy on a road, but it’s more accessible limits mean you can access them on the road and relish in the rear-engined layout more easily. The 4 would be more relaxing more of the time when away from the track, but it’s hardly inert, hardly boring.

I can see the arguments for both cars, I can see why Porsche makes both, and I can see why people buy both. With four-wheel drive, the 911 is a very accomplished sports car: fast, fun and usable. But if you want your 911 to feel like a 911, it needs to be one of two-wheel drive versions even if you live in a country that’s often wet.