Our Cayenne Turbo's a newcomer to the evo fleet, and we're just discovering its hidden talents 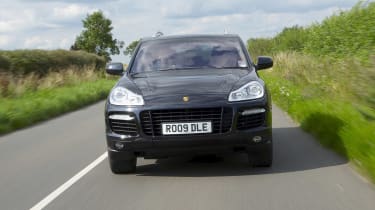 It’s got a tow bar, there’s just shy of 500bhp hidden away up front and it’s a flipping Porsche, OK? I’ve only been driving the Cayenne for a month but already I’m having to justify its existence to anyone who finds out about my latest set of wheels. To be honest, I’m having to justify it to myself on occasions too. Porsche’s SUV has been around for seven years now, but it remains as controversial as ever – a Cayenne Turbo has to be about as far out of step with popular opinion on motoring as it’s possible to be. It’s certainly not the most elegant way to travel, but this was an itch that I felt needed scratching, so that’s what I’ll be doing over the coming months. Even if it’s not going to be a pretty sight.

Our Cayenne hadn’t even arrived when it delivered its first surprise – its price. The Turbo version starts at £75,800, but, in true Porsche fashion, there’s a multitude of extras that need to be ticked on the options list in order to create the car you were expecting in the first place. There’s simply not enough space here to list all the extras on our Cayenne, but amongst the highlights are Porsche Dynamic Chassis Control (or PDCC, an active anti-roll bar system that reduces roll in the corners) at £2095, ceramic brakes at £5677 (more on those in a minute), 20in wheels that cost an additional £1163, an electronically retracting tow bar at £773 (bound to be handy, that one), roof rails for £551, and a powered tailgate at £419. Then there’s a ridiculous £482 for the padded steering wheel rim (what’s the alternative, I wonder) and £341 for the multifunction steering wheel. And how about £105 to have coloured badges on the wheel centres, or £132 to have the Porsche crest embossed on the front headrests? I’m not sure what the German for ‘taking the Mickey’ is, but when the final tally comes to a whopping £90,005, that’s what some of these ‘extras’ seem like to me.

Having come straight to the Cayenne from my old Audi RS6 long-termer, the next surprise was just how much heavier the Porsche feels to drive. Steering, pedals, the way the engine huffs and puffs as you pull away, they all give you the incorrect impression that the Cayenne is actually made of lead. According to the spec sheet the Turbo is a smidge over 300kg heavier than the Audi (2355kg plays 2025), so perhaps I shouldn’t be that surprised, but then a Range Rover Sport is some 235kg heavier again but somehow doesn’t feel it to drive.

All very odd, but get some speed up, string a few corners together, and this feeling of massive mass begins to melt away. Roll is impressively suppressed (that’ll be the PDCC) and the Cayenne turns into a corner more keenly than any other car of its type that I’ve driven before. OK, it doesn’t have the ferocious punch of the RS6, but a hard-charging Cayenne is still quite a sight (similar to an angry rhino to any unlucky bystanders, I’d expect). At least those carbon discs are well up to the task of stopping things getting out of hand. It’s a shame, then, that in general usage they’re horribly grabby, much in the same way the brakes on Audis used to be. It’s not the sort of feel I’d expect from a Porsche at all.

As the miles have piled on, I’ve discovered that the Cayenne has other hidden talents, like the way it insulates you from the outside world. Our car has the optional heat-insulating laminated glass for the side windows (yours for £713), which seems to have the excellent side effect of dulling wind noise even further, so it’s remarkably quiet when cruising on fast roads. (Incidentally, at the 70-80mph UK motorway norm, the twin-turbo V8’s revs are sitting at just 1700-1800rpm, allowing fuel economy to climb above 20mpg – as long as you can resist the temptation to boot it.)

Another surprise is how good the Cayenne seems to work off road. I’m probably in a minority of one here (no, make that two, as the vet who visits our farm has a Cayenne too), but using the Porsche for general farm duties recently I was impressed by how it can go through big dips without snagging any bodywork. That ugly boat-like nose may not be a thing of beauty, but it does allow the Cayenne to handle some pretty rough tracks and tackle ditches in a way a Land Rover Defender would be proud of. Seems there’s more to this Cayenne than just speed after all…