Can’t quite stretch to a One-77? Don’t worry – you could be enjoying a V12-engined Aston Martin for as little as £30k. Peter Tomalin is your guide 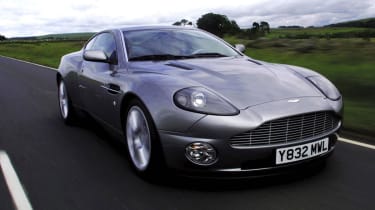 Vanquish prices are hardening, reflecting the growing stature of the last Newport Pagnell-built Aston and its relative rarity (fewer than 2600 were built). The more powerful ‘S’ version (up from 460bhp to 520) introduced in 2004 is the most desirable, though earlier cars can be converted to ‘S’ spec by the Works Service department. Another popular conversion is to replace the automated gearbox with a conventional six-speed manual, while a desirable option is the Sports Dynamic Pack. A 140-point check by a specialist is advisable.

The main points to check are that the automated gearbox shifts reasonably crisply and without excessive clutch slip (the clutch kit alone is over £3k) or driveline clonks. Look in the service book for the upgrade to the magnetic gear position sensor, which eliminates many gear selection issues (standard from chassis 600 onwards). Remove the front undertray and check the steel front subframe for corrosion – it’s a known weak spot and replacement will cost over £5000. The V12 is largely bulletproof, the main trouble area being the coil-packs. If these have been replaced with the later, improved items, that’s an important box ticked. Avoid high-mileage cars: 3000-5000 miles a year is average.

Neil Woodward - ‘I bought my 2002 Vanquish last year with 44,800 miles on the clock. I’d heard about the gearbox and subframes, but there are solutions to all the known problems and specialists who can fix it at sensible prices. It’s not a cheap car to run, but it’s not the horror some say it is. I’m an engineer and the deeper I delve, the more I appreciate the engineering. It has never let me down, and I’ve had some fantastic drives. In fact it has become a way of life.’