The best Aston Martin V8 Vantage yet is the new Vantage S, driven here in Coupe and Roadster form 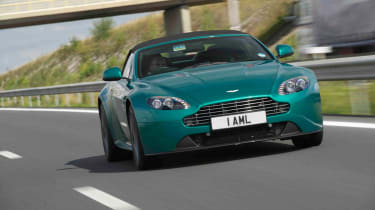 What is it? The Aston Martin Vantage S, a sharper, more powerful V8 Vantage with styling tweaks inspired by the V12 Vantage supercar. It costs £102,500 as a coupe, £110,700 as a roadster. Technical highlights? The 4.7-litre V8 engine has its maximum outputs boosted by 10bhp and 15lb ft, rising to 430bhp and 361lb ft. There’s a new gearbox, too, a Prodrive-developed single-clutch automated manual with seven speeds. It’s called Sportshift 2, and is air- rather than oil-cooled, unlike its predecessor, and is said to be 24kg lighter and boast 20 per cent faster shift times. There’s a quicker steering rack and beefier brakes compared to a regular V8 Vantage, too. What’s it like to drive? Its wieldy, short-wheelbase body and light, reactive steering have an instant rightness to them while the ride is reasonably firm, but never intrusive. The Vantage S can play the part of both cosseting cruiser and sharp sports car.  The front end (near-full of V8 engine) still feels a touch heavy should you pile hastily into corners. But enter a bit slower and you’ve more opportunity to utilise its front-engine/rear-drive balance, enjoying a lovely V8 wail on the way out of the turn. It sounds utterly fantastic: there’s a subtle burble on part throttle or at low revs, but press the Sport button and go for it and you’re treated to a sonorous, racecar-like sound that can’t fail to make a keen driver smile. The only real let-down is the gearbox, a ponderous delay between the flick of a steering wheel-mounted paddle and an upchange. In the days of DSG and fancy twin-clutch transmissions it’s disappoining to drive a car with such a stagger between gears, a slight easing of the throttle needed to smooth off a trip through the ratios. Changes on the limiter during harder driving are much snappier, though. How does it compare? A hundred grand buys a lot of car these days. A £100K slice of Porsche 911 or Audi R8 would be more dynamically adept but (to this tester’s eyes) nowhere near as good looking as the Aston. £97,000 now buys you a 542bhp Jaguar XKR-S with similarly emotive looks and soundtrack. Anything else I need to know? While subtle styling tweaks mean it may look much like every other V8 Vantage sold in the last six years, the car has developed a lot since launch. This is the best example yet.