Life has been a little quiet on the car front since I waved goodbye to my Carrera S last year. A couple of cars have come and gone but, to be honest, I've spent the last six months eagerly awaiting my (and Aston Martin's) new 'baby' - the V8 Vantage. Since I placed my order three years ago, the car has been the subject of almost constant press coverage, making the wait seem interminable. 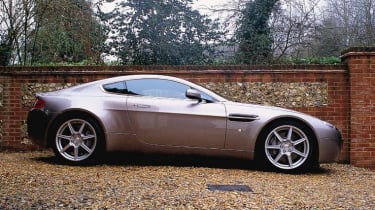 Life has been a little quiet on the car front since I waved goodbye to my Carrera S last year. A couple of cars have come and gone but, to be honest, I've spent the last six months eagerly awaiting my (and Aston Martin's) new 'baby' - the V8 Vantage. Since I placed my order three years ago, the car has been the subject of almost constant press coverage, making the wait seem interminable.

Aston Martin itself gradually wound up the anticipation with a stream of teaser presents (photo cards, brochures, DVD, key fob, corkscrew...), not to mention two visits to Gaydon - one for a factory tour, the V8's unveiling and to choose the spec of my car, another to take part in a focus group (interestingly, my group was for Aston 'virgins' and, of the ten of us, most were Porsche owners).

Finally, Charlie Skelton at supplying dealer Stratton Motor Company in Norfolk called to say my car was on its way and to ask if I'd like to arrange a collection date. Er, yes, ever so slightly!

I'm sure that Charlie's hand-over was both lengthy and thorough, but it passed in a blur, most of it being spent with my eyes following the Aston's keys, which always seemed just out of reach. Finally the time came to drive off, and the reality of owning my first Aston Martin began.

Sitting in a Little Chef an hour later, the sight of the Vantage parked amongst 'normal' cars only served to emphasise its stunning combination of smooth style and pent-up aggression. Even after years of press coverage and seeing the car at shows, I still wasn't prepared for what it would look like in a real-life situation. Although almost identical in size to a 997, it looks much, much lower and wider. No-one passes it without staring.

The interior's an event too. I'm very happy with the Obsidian leather, lightened by beautiful mid-grey brushed headlining - it's a perfect complement for the Tungsten Silver exterior.

The 150-mile drive home was completed on cloud nine, followed by a day of local getting-to-know-you blats. The plan then was for a 400-mile journey northwards the next day to visit relatives for Christmas which, when combined with the return journey, would take the Vantage nicely over the 1000-mile mark and ready for its check-over service in double-quick time.

The Northumberland trip proved that we could get all our luggage, presents and a set of golf clubs into the Aston, which is a bonus. The mainly motorway run didn't reveal much about the car, though, other than confirming how special it feels. At normal road speeds it seems more focused than my old Porsche (I was expecting it to be 'softer'), and there's a gorgeous bassy exhaust note pulling out of filling stations - if you've got the window down. Window up, it's quiet enough to make me think I've stalled it when pulling up at T-junctions.

A few runs on some deserted Northumberland roads hinted that this is going to be a great car, but to be honest it was too early for me to be truly objective about my new baby. Maybe a drive home taking the scenic route would tell me more...

Ready to depart, turning the ignition key resulted in an impressive array of warning lights, but no red glow from the starter button, which was now completely lifeless. The computer readout became hyperactive, announcing that every system it had checked had failed.

Time to call Aston Martin Assist. Rather than subjecting you to the full details of the truly tedious and highly frustrating saga that followed, suffice to say that AM Assist's service - actually handled by Mondial UK - was so poor that, following calls to the ever-helpful Charlie at Stratton, Aston Martin itself took over. The car was eventually taken to Reg Vardy near Sunderland and we headed home in a courtesy Merc.

After a few days the call came that my car was ready. According to Reg Vardy a door relay needed 'rebooting' and an earth strap relocating. You know when you're not a technician so you don't feel able to argue, but at the same time aren't quite convinced? Hold that thought.

The Vantage arrived home the next day after a 350-mile trip on the back of an open transporter (as opposed to the closed one promised by AM Assist), somewhat negating Reg Vardy's valeting efforts. A blissful 100 miles or so of driving followed the next day, and plans were being hatched for a great first weekend of 2006. But we all know what happens to plans, don't we?

Trying to put the car into the garage, the Northumberland virus struck again. This time I decided to give AM Assist a miss and called Charlie instead, who arranged for a technician to visit within the hour. Sadly, said technician had no luck and, as I write, the factory itself has arranged to take the car back. For the 22 days I've owned it, I'll have enjoyed it for just seven.

Don't get me wrong, any car can break down - I'm quite laid back about that - but there's no excuse for poor service, particularly when the consequence is that the positive feelings generated over time by the factory, dealer and, not least of all, the car itself become thoroughly dented.

Here's hoping that I can tell you more about actually driving the car next month.