A stunning collection of iconic sports cars is set to go under the hammer at the RM Sotheby’s Icons sale in New York on December 6. 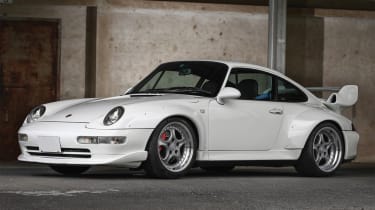 The RM Sotheby’s Icons sale, set to take place at the auction house’s New York base, includes some of the most iconic cars in automotive history. The auction gets underway on December 6 2017 and is comprised of a small lineup of coveted cars that have achieved iconic status in the automotive sphere.

Being so new, a Bugatti Chiron is perhaps one of the most eye-catching cars in the catalogue. The unregistered example, the first ordered in the US, has just 250 miles on the clock - all of them accumulated during testing. If the pre-auction estimate is near the mark, the hypercar could go for as much as £3m.

No fewer than eight Ferraris will go under the hammer at the RM Icons sale and a 1959 Ferrari 250 GT LWB California Spider Competizione is expected to fetch the biggest fee.The car is estimated to sell for between £10.5m and £13m. This example of the aluminum bodied racer, designed by Scaglietti, finished in fifth place at the Le Mans 24h just days after leaving the factory in 1959.

From the oldest Ferrari in the auction to the newest, a Ferrari LaFerrari with a top-end estimate near £3m – some three times its initial sale price. Following it across the auction block will be one of its forebears, a 1990 Ferrari F40 with a £1m estimate. The F40 represented the supercar pinnacle alongside the Porsche 959 in the 1980s, just as the LaFerrari squares up to the 918 Spyder today.

Then comes a fine array of Ferrari V12s, including a Pininfarina-designed 250 GT Cabriolet, a Testarossa, a 365GTB/4 Daytona Berlinetta and an F12 tdf. If 12 cylinders seems a little excessive, there’s also a pristine white, Dino 246 GTS that has covered just 19000 miles and has an estimate above £375k.

The Italian entries don’t stop with Ferrari, two Lamborghinis and a Lancia will also go under the hammer. A 25th anniversary edition Lamborghini Countach finished in white, with a matching interior might not even be the rarest Lamborghini in the sale. That’s because a Lamborghini LM002, the predecessor to the marque’s forthcoming Urus SUV, is also up for grabs. It carries an estimate double that of its supercar relative of between £300k  and £375k. 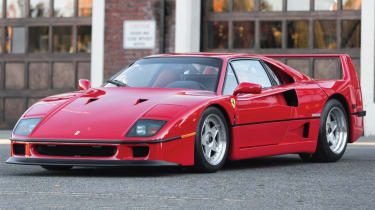 A yellow Lancia Delta HF Integrale Evoluzione is the road-going homologation version of one of the most successful rally cars of all time. This car has only 4000 miles on the clock and the auction house is expecting it to collect in the region of £150k.

Finally, we come to the sale’s contingent of British icons, with a Jaguar E-Type Series 1 Roadster and Aston Martin DB5 Convertible joined by an eye-catching Austin-Healey 100-Six dubbed ‘Goldie’ on account of its 24-karat gold detailing.