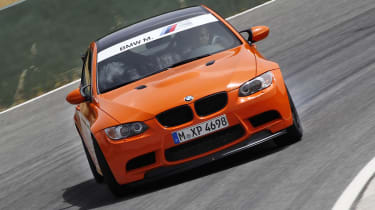 What is it?A very expensive M3. There’s no official number from BMW UK because the 10 cars due to land here won’t arrive until next year and the 20% VAT rate will then be in place. But we know it’ll be £100k plus. It’s more of a track car than the iconic E46 CSL. The half-cage is standard as are the Pirelli P-Zero Corsas. There’s no manual gearbox option and there will only be 150 built.Technical highlightsThe motor is now 362cc bigger, bringing an extra 30bhp and 30lb ft (outputs are now 444bhp and 325lb ft, the latter delivered earlier in the rev range than before). Perspex side and rear glass, no rear seats, lightweight door cards and a minimalist centre console save 75kg over the standard car. The gearbox is BMW’s seven-speed DCT (dual clutch transmission), which is engineered by Getrag.What’s it like?Around the Ascari track in Spain, fast, very fast. There were standard E92 M3 Competitions to drive for comparison purposes and the GT3, predictably, monsters them. It doesn’t feel its 1530kg in direction changes, which is testament to the chassis changes which include a solid mounted rear subframe and adjustable dampers. Straight-line speed is impressive, BMW claims 0-62mph in 4.4sec and 190mph flat out. The noise is naughty.

But the big question surely is the price versus the performance. Is it really worth £100k plus? Well, it’s exclusive, beautifully engineered and very approachable. The combination of DCT transmission, front-engine/rear-drive and excellent stability systems make it easier to drive than a Porsche 911 GT3 RS. The brakes are the first on an M Car to match the straight line performance, a good thing.

But it struggles for traction next to the Porsche, doesn’t steer as sweetly and isn’t as fast - in a straight line or in terms of lap time. I found myself enjoying it immensely because it takes that age-old M3 trick - being able to carve a neat line one lap and then providing hilarious, smokey slides the next - and moves it a stage further. The nagging doubt remains though, that a BMW M3 Competition with a half cage, some sticky rubber, new suspension, bigger brakes, some noisy pipes and a re-map mightn’t be all that different. And the work wouldn’t cost £50k to complete.

How does it compare?On price, it struggles. A standard GT3 Clubsport is a better, more rounded machine - but only just. It is £20k cheaper though, and the 911 GT3 RS is better still. But for those who love BMW and the M3, this is the ultimate, limited edition expression of that passion. And as we all know, scarcity is as important as ability for future values.

Anything else I should know?Not really. The GTS is a great drive, but in pure, objective terms, it just doesn’t justify the price. It should have been £75k and they should have made 1000 of them. Then Porsche would have had one hell of a fright.