What to look out when buying a secondhand BMW M3 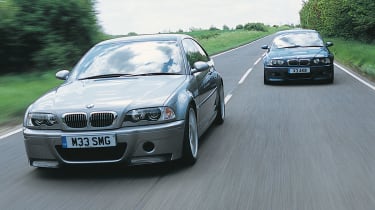 CSL owners had the option of buying it without the usual 155mph speed-limiter if they held a race licence. BMW will derestrict current cars, but the ECU has to be sent to Germany and it costs around £600. After complaints from CSL owners, BMW also added a commemorative plaque showing it’s one of a limited edition of 422.  If the plaque is missing, dealers are able to request a replacement.

EngineThe M3’s big engine woe was the failure of the crankshaft big-end bearings. There’s no set time when this might occur – it could be 6000 miles or 60,000. Improvements to the oil supply (filters, pumps, etc) should cure this and have been sorted under warranty, so if you’re buying a pre-June ’03 car check this work has been done. The CSL has had none of these problems.

The power steering reservoir cap in both M3 and CSL can become detached and leak, causing damage to the power-steering and making a mess of the engine bay. This can be cured with Loctite and a jubilee clip on the reservoir mount.

Chipping makes little difference to this engine unless accompanied by extensive reworking of its internals, so best avoid modified cars. Finally, on the CSL check that the induction flap is working and the DME software upgrades are up to date.

GearboxThere are few problems with the gearbox itself. Most issues concern the SMG system but can be cured by applying an up-to-date software upgrade. There was a recall in 2004 to replace the SMG relay module following premature wear on earlier cars; ensure it’s been carried out. There have also been cases of  clutch-slip on earlier cars. This has been identified as the software not accounting for clutch wear – a software upgrade has rectified this.

SuspensionThere have been cases of premature wear of the front wheel bearings due to the bearings working themselves loose. Make occasional checks for wear and it shouldn’t be a problem. The connecting arm of the front anti-roll bar has been known to come loose and make a loud metallic tapping noise when driven over rough surfaces; a revised part should have been fitted by BMW under warranty.

The CSL uses the same suspension bushes as the M3 and they’re not up to regular track use. After a few thousand miles they can need replacing; they should last much longer with purely road use.

BodyworkThe nose is susceptible to chips, and high-milers can look tatty if not resprayed. Examine closely for accident damage; the common areas are front and rear quarter panels. It’s common to see cracks appear on the front bumper/spoiler assembly of a CSL following impacts with high kerbs – it costs a painful £2500 to replace. The rails adjacent to the carbonfibre roof can discolour, requiring replacement under warranty.

Wheels and tyresThe 18in alloys aren’t popular yet are better for the ride quality and also reduce tramlining. The 19s are easily kerbed and refurbishment is costly. Several CSLs were supplied with normal M3 19in rims instead of the unique CSL alloys with Michelin Cup tyres. The M3 wheels are narrower than the CSL’s and detract from the second-hand value. BMW dealers were often wrongly informed that the CSL wheels could only be fitted with Michelin Cup tyres; in fact, most owners buy a second set of CSL wheels fitted with a regular tyre for winter use.

The CSL has a huge appetite for Michelin Cups if used on track without the negative camber being adjusted from the -1.25 degree standard factory setting to Michelin’s guideline of -2. Note that there are currently no alternative makes to the Michelin Cup in the CSL’s 19in sizes and therefore prices are non-negotiable.

ExhaustThe CSL is fitted with a unique exhaust system that’s lighter and has thinner walls than the M3’s. Yet many owners still upgrade their exhausts. A performance hike is only achievable, though, by fitting louder, higher-flowing race cats.

InteriorInteriors generally wear the miles well. There have been a few cases of door handles failing but this should have been fixed under warranty. The carbonfibre panels in the CSL are prone to scratches, but the Alcantara is hard-wearing.