South Korea is serious about leading the way in mainstream performance with its new flagship models. Here’s why they’re such a big deal. 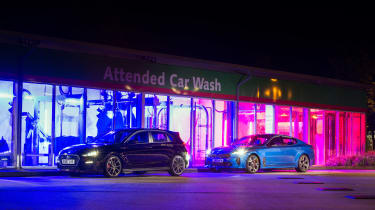 A year or two ago Kia stretched the definition of ‘United Kingdom’ to absurdity by holding the ‘UK launch’ of its then-new Optima Sportswagon in… South Korea. Driving the Optima was something of a sideshow to the main event, though, which was a tour of the firm’s Namyang test facility and a chance to speak to the man Kia and Hyundai had recently poached from BMW M to lead its car development: Albert Biermann.

Two things stick in my mind from that day. The first was that the Optima Sportswagon was surprisingly adept around Kia’s wet and dry handling circuits, benefiting greatly from the fitment of Michelin Pilot Sport 3 tyres, a new rack-mounted power steering set-up, a much stiffer bodyshell and heavily revised spring and damper settings, all changes made at Biermann’s request.

The second was a comment by the man himself that explains a great deal about cars such as the Hyundai i30 N Performance and Kia Stinger GT S that currently reside on evo’s Fast Fleet: ‘At Kia and Hyundai I spend more time actually driving and discussing dynamics with engineers than I did with BMW M – there, it was all meetings and arguing about money with accountants.’ 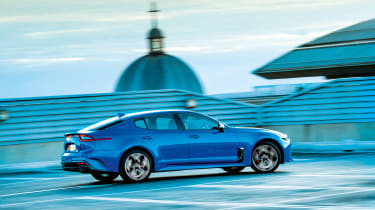 At the time such remarks were to be taken with a pinch of salt; clearly you’re going to paint your current employer in a positive light. But they were understandable, too, from a man clearly frustrated that BMW’s M division no longer had the focus it used to have in its early days. At the time, the i30 N and Stinger were in their infancy – little more than rumours – but Biermann’s comments that his first mission at Kia had been to restart the Optima GT project from scratch after driving an unremarkable prototype suggested he wasn’t going to settle for ‘nearly’ cars.

The i30 N and Stinger GT S are not ‘nearly’ cars. The Hyundai is already an evo group test winner, showing established players Volkswagen and Peugeot a pair of noisy exhaust pipes over the roads of Dartmoor (issue 245), and while we’ve not yet put the Kia alongside its rivals, we’ve a sneaking suspicion it might do rather well against cars with propellers, stars or rings on the bonnet.

Of the two, the i30 N is closest to our hearts. It’s a thrilling, rowdy, but carefully considered car, one that matched the 308 GTi’s excitement with the Golf GTI’s everyday common sense in our recent group test, while never feeling second-best in either category. The key is that the base car, the regular Hyundai i30, has itself been steered under the new Biermann regime and is itself impressive. Leave the £28k i30 N in Comfort mode and the regular i30’s attributes shine through, albeit with unsubtle hints as to its new purpose: snug seats, a firm but well damped ride quality, and steering very similar in weight and response to… well, a BMW’s. 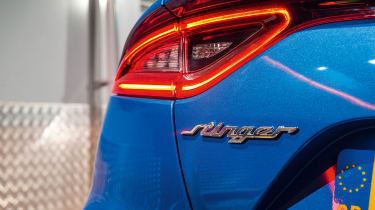 The ability to adjust the car’s characteristics down to the smallest detail (you can choose how aggressively the auto rev-matching responds, for instance) is another trait carried over from BMW, as is the option to assign your favourite set-up to a single button. We’ve heaped scorn on driving modes in the past, but Hyundai is doing them right: few other cars allow half a dozen drivers all to find their perfect B-road hero waiting for them in the car park.

Character and ability are what separate standard i30 from ‘crikey, where did that come from?’ N, though. It starts with a growling exhaust that does a passable impression of the i20 WRC car’s and crackles like a New Year’s Eve celebration every time you back off the throttle or punch from one gear to the next. It’s a joy to extend the 271bhp 2-litre unit, which is as happy to rumble around in its mid-range as it is nudging the limiter, and is responsive to tweaks of your toes and deft movements of the chunky gearshift.

Then there’s the handling, which is so far removed from that of any Hyundai we’ve driven before that it could be from a different manufacturer entirely. All the characteristics that define our favourite hatches – keen turn-in, front and rear axles that share the work in cornering, closely stacked gear ratios – are present and correct. Resist the temptation to knock the dampers into their firmer modes and the N doesn’t feel too troubled by rougher surfaces either, rarely skittering across bumps and quickly regaining composure on the rare occasions it does.

Some are edgier, many are faster and others still deliver more feedback to your fingertips, but the i30’s relatively compact size and kerb-sniffing front axle give it a wieldy feel increasingly alien as cars in this class grow in footprint. Our preferred Civic Type R, for all its rampant excitement and blistering pace on road and track, feels more like an Accord in comparison. 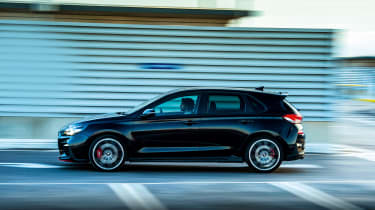 The Stinger? It’s grander, far more grown up than the i30 N, aimed at a market that Kia hasn’t approached before – and possibly an even more difficult one to breach, given competitors’ badges here carry more kudos than those of even the best GTIs or Type Rs. But the moment you send it down a stretch of road it justifies its existence, as much for what it doesn’t do as what it does. Audis feel beautifully built but also often stiff-legged on patchy UK tarmac. BMWs, recently at least, have hidden their true dynamic talents behind gloopy, unnaturally heavy steering and spiky power deliveries, while Mercedes wow with their technology but grumble and creak in a way that makes you fear for their longevity.

Like the i30, the Stinger seems to have found a balance of its competitors’ most desirable points but erased many of their weaknesses. The GT S feels composed and graceful on the road where all but the tallest-sidewalled Audis make you wince. The steering’s natural weighting and progression off-centre and linear throttle response feel more organic than those of a 4-series. And there’s clearly a Mercedes influence in the cabin, from the round air vents to the slightly clumsy location of the central touchscreen, but the Stinger’s standards of build have more in common with Mercedes of yore than Mercedes of 2018.

There’s a Jaguar-like flow to the Kia’s gait, one that Jaguar itself could learn a few tips from. The distinctive styling, with its grinning grille and bulldog haunches, certainly out-Jags the Brit brand’s unremarkable XE and XF, and makes you wonder whether even Alfa Romeo played things a little too safe with the pretty but relatively generic Giulia.

Come to think of it, the 365bhp, twin-turbo V6 Stinger could probably take a pop at most cars in this segment without bloodying its ‘tiger nose’. It’s a mark of how far Kia has come that it’s only a diet and quick steering rack away from matching the Giulia’s fun-factor, but throw in Kia’s more traditional attributes (like seven-year warranties and equipment lists bursting at the seams) and the GT S’s £40k price tag makes the Brit, Italian and Germans look slightly risky as long-term propositions.

That Kia and Hyundai make competitive mass-market cars should no longer come as a surprise. The brands are relatively young, but they’ve still had several decades now to get the basics right – the days of Ponys and Prides are long gone. But tempting people like us into performance models against competitors with a century or more of history? That’s no mean feat, and with several other hot models due in the next few years the barrage isn’t over yet. Never mind BMWs and Golf GTIs; whose scalp will the Koreans take next?