Subtle tweaks have made the Type R an even more formidable hot hatch, but we’re keen to try one again soon to understand fully the changes to the suspension setup 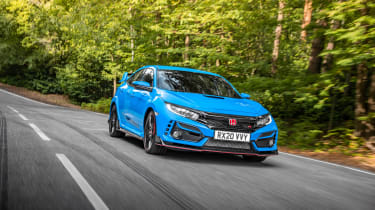 Honda’s mercurial FK8 Civic Type R has in our view yet to be toppled in the hot hatch market. We’ve even gone as far to say in the past that it feels like the hot hatch Porsche’s GT department would have made, given such a brief handed to them. Why? Well, it’s not just about performance, but about the quality of its controls, its dynamics and its impressive levels of endurance – it’s the complete package on road and track; simply a brilliantly engineered vehicle.

Now, Honda has given the car a mild facelift, and also split the range to offer more choice to buyers. There is the standard model and the high spec GT, much the same as before, but early next year they will be joined by a Sport Line version that features a greatly reduced rear wing and smaller 19” wheels shod with Michelin Pilot Sport 4S tyres. Finally, there’s the Limited Edition model that features less interior trim to save nearly 50kg (47kg) and runs on Michelin Cup 2 tyres. Has Honda made the best even better? 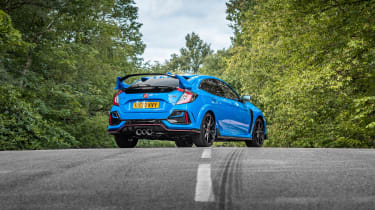 There are no changes to the 2-litre turbo engine, and that’s just fine with us. With 316bhp and 295lb ft of torque it was already at the top of the class - and reaching the limit for what is desirable in a purely front wheels driven hot hatch.

The 0-62mph time is 5.8-seconds, while the top speed is within a whisker of the magic 170mph figure (169mph). As ever, it feels massively quick, although this is a grown-up sort of performance car, and not one you drive with the carefree thrash-it-everywhere abandon of a classic small hot hatch. It’s a serious bit of kit. 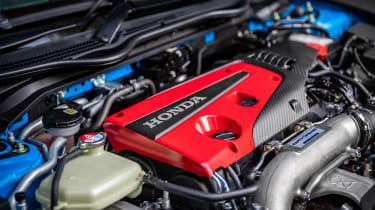 The exterior design changes to the Type R are small, with little winglets mounted in the bumper and lower fog light surrounds. Look very closely at the grille and you might notice a larger opening, which combined with an updated radiator has, says Honda, reduced engine temps by up to 10 degrees during hard circuit driving. That mod affected the aerodynamic balance over the front axle, so the design of the air dam has been altered to suit.

It’s just such attention to detail that characterises the evolution of the FK8. The bushing in the front and rear suspension has been made slightly stiffer, there are new low friction ball joints at the front, and the suspension geometry has been revised. The adaptive dampers have a higher processing speed – 10 times faster, in fact – and there are new two-piece floating brake discs on the front axle with revised brake pad material. The latter has been carried out in the name of improved pedal feel and endurance, but also saves 2.5kg in unsprung mass per corner.

The limited edition achieves a significant amount of its weight loss through binning the air con and the infotainment system. But there’s also a reduction in the sound deadening material fitted, along with various plastic shrouds, plus it runs on forged BBS wheels that are 10kg lighter as a set. The steering has been recalibrated to suit. 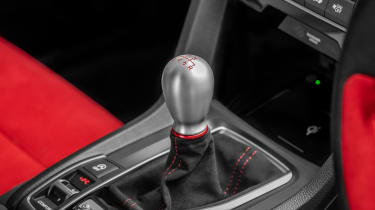 Initial impressions are much the same as before, and highly favourable. The steering has terrific precision and a natural progressiveness to rival a Porsche’s, while the manual gearchange is perhaps the best of any mainstream production car. In fact it’s better: the aluminium shift knob has been revised in design and weighting, and the change is even more satisfying now. The new Alcantara clad steering wheel is a joy to hold, and the enveloping sports seats are spot on as usual.

The same applies to the brake pedal feel, which is vastly better than any rival, offering a really solid pedal feedback and easily modulated retardation. Once again, the sheer depth of the Type R’s abilities in these small but crucial areas elevate it beyond being merely a very fast hatchback. It’s a true driver’s car.

What’s a little less clear for now is the new Type R’s dynamic qualities. As mentioned, the default driver mode on startup is Sport, and in the FK8 as we knew it this was a suspension setting that was easily comfortable enough for daily driving, but had all the control required when pushing on. Type R mode was aimed at track driving, which made sense, and Comfort was exactly what it said - a slackening off of the damping for a greater deal of compliance over poor surfaces. As before, Honda resists fitting an Individual mode, so you have to pick one of these three, which means you also get the sleepiest throttle response in comfort, no enhancements to the sound (I’m not sure that’s such a bad thing) and lighter steering weight. 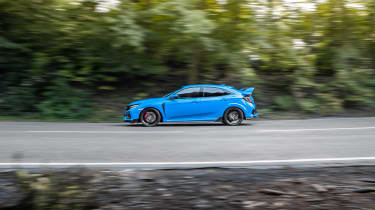 The first example of the new car evo tried felt much firmer than before, even though Honda UK states no changes have been made to the spring and damper rates. So much so that for most of the time Comfort mode was preferable as Sport introduced an aggressive rebound over poor road surfaces that had the driver nodding away uncomfortably, R+ mode was definitely off limits. On smooth fresh asphalt none of this was an issue, but the Type R’s mastery of our typically challenging B roads seemed to have taken a knock. Then we tried a second example - and this felt much more like the pre-facelift car, albeit perhaps a tiny bit firmer. Which one was right, if either? We can’t say.

In all other regards it’s business as usual for the Type R. Massive grip, fine adjustability, raw speed, the Civic seems to offer all the abilities of the most hardcore Megane with much of the liveability of a typical five-seat hatchback.

Our drive of the Limited Edition was confined to a very small circuit, but the initial signs were that it really takes the Type R’s performance to another level, with appreciably more grip and acceleration due to its weight loss and sticky rubber. We can’t wait to try one on the road and put it around our Bedford track to see if it can eclipse the Megane Trophy R. 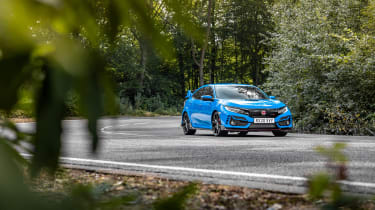 While European emissions laws continue to tighten their grip on, the next 12 months will be littered with new hot hatchbacks that will rival the updated Type R. Renaultsport's updated Megane is due very soon, with every variant now featuring the 296bhp version of the 1.8-litre turbocharged engine in a simplified range. There’s the new Mk8 Golf GTI and Golf R on the way too, not to mention VW’s hotter GTI Clubsport that's been spied in final testing, plus an all-new Cupra Leon, updated Hyundai i30 N and BMW’s new 128ti to consider. Bring on the group test.