Range Rover Evoque (2013-2019) review – with once exotic style now familiar, does the Evoque still have what takes? 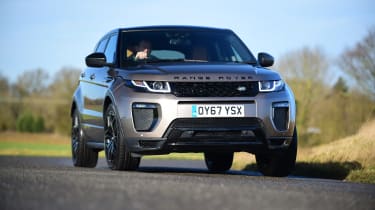 There’s no doubting the staggering early success of the Range Rover Evoque. The combination of show-stopping styling (literally, as the production Evoque famously appeared all but unchanged from the Land Rover LRX show concept revealed at Detroit in 2008), and a fashionable premium badge proving irresistible to many. Not so long ago that meant the Evoque accounted for more than one in three of all Land Rover sales. Demand around the world has remained strong ever since, and with punters adding expensive options to already premium-rated Evoque price tags, it’s been extremely good business for the brand’s owner JLR.

The Evoque spec hasn’t changed fundamentally over the intervening years, but there has been one significant upgrade to the model line-up. The revised Evoque for sale at dealers in 2016 included an upgraded navigation system, tweaked interior trim and also adopted the newest Ingenium engines from the corporate parts bin.

> Click here for our review of the Jaguar E-Pace

The upgrades certainly helped keep the Evoque abreast of its rivals, but the overall experience hasn’t altered much relative to the opposition. So while the Evoque isn’t the most exciting SUV to drive, it still offers a welcome sense of quality in everything it does.

Comfort and refinement are at the top of the list of Evoque attributes, and while the Porsche Macan runs rings around for the fun-to-drive factor, it remains a luxurious and competent machine. 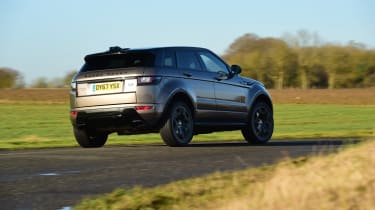 Performance and 0-60 time > The fastest Evoque – the most powerful petrol – hits 60mph in 6.0sec and has a top speed of 144mph. Diesels aren't quite as brisk, but performance isn’t far off with the most muscular offering. Read more about the Evoque's performance here.

Engine and gearbox > The Evoque’s 2-litre turbodiesel engine has three states of tune – 148bhp, 178bhp and 237bhp. There’s a choice of either a manual or a nine-speed automatic gearbox, and two- or four-wheel drive. Read more about the Evoque's engine and gearbox here.

Ride and handling > Impressive at launch, the Evoque’s dynamics now lag behind the class best. Ride has improved though and body control is good - there's little roll or pitch. Read more about the Evoque's ride and handling here.

Interior and tech > Standard across the entire Evoque range is a leather interior. Land Rover also offers a dual-view touchscreen infotainment system and a suite of smartphone apps. Read more about the Evoque's interior and tech here.

Design > The Evoque is without doubt a stylish car, especially clad with big wheels and painted in bold colors. Read more about the Evoque's design here. 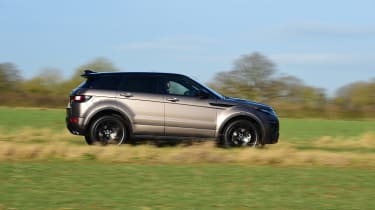 Prices for the Range Rover Evoque start under £31,000 for a 147bhp eD4 two-wheel drive model with a manual gearbox. The top model is the Si4 powered Autobiography, which retails at over £55,000.

Six trim levels are offered on the Evoque: SE, SE Tech, Landmark Edition, HSE Dynamic, HSE Dynamic Lux and Autobiography. The latter offering the full luxury experience Range Rovers are famed for with only a few options excluded from this plump trim level. 13 paint options and 18 alloy wheel designs mean all manner of buyers should find a colour/wheel combo to their liking. Autonomous emergency braking, front/rear parking sensors and the smaller 8-inch touchscreen infotainment interface offer reasonable value on the base spec SE.

The premium end of the mid-size SUV spectrum isn’t short on variety, where the Evoque represents the value choice, partly attributed to its aging status. The German trio of Audi’s Q5, BMW’s X3 and Mercedes-Benz’s GLC are much newer. It's worth remembering the new Land Rover Discovery Sport, too. The Freelander replacement offers similar performance and technology to the Evoque. You could argue it lacks the Range Rover's chic style, but the boxier dimensions make for a more practical package starting at £28,355.

Filling every conceivable SUV niche, Land Rover now offers the Evoque in convertible guise. Dubbed 'the convertible for all seasons', it can’t really reconcile the convertible and SUV body styles to elegant effect. The convertible boasts the new 10.1-inch JLR infotainment system, which is a definite improvement over the previous generation unit.

A cheaper, and just as stylish alternative to the Evoque is the SEAT Ateca. The badge appeal doesn’t carry the same prestige, but it’s a more competent road manners and sharp looks make a it worthy competitor.