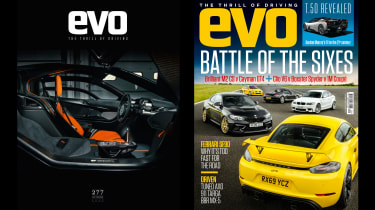 The latest issue of evo magazine is in the shops and available to download now, and if travelling to your local retailer isn’t possible you can also order a single copy from magsdirect.co.uk.

Sometimes there’s a sense among real car enthusiasts that the golden age of internal combustion engine is behind us. Some say there’s little room left for t in our hybridised, homogenised and more recently sanitised world for any new cars to dream about in a post-petrol reality. Issue 277 is here to prove that theory wrong.

Our cover story perpetuates a new rivalry between historic enemies. The BMW M2 CS has taken its time in its evolution from the unpolished original M2 that came last in eCoty 2016 to the new £74,000 CS, via the remarkable M2 Competition. To quantify it’s excellence, we brought along not just its key rival, but also our reigning eCOTY champion, the Porsche Cayman GT4, to measure just how far BMW M has come in recent years.

To contrast these new high performance six-cylinder sports cars is a trio of evo icons. Two are predecessors of the Porsche and BMW family, with the 987 Boxster Spyder being Porsche’s first hardcore Boxster varint and the BMW 1M coupe setting the template lto be followed by the M2. It’s the Renaultsport Clio V6 that’s arguably the most specialised of the three though, as Antony Ingram found out.

Talking of golden oldies, this month also sees evo’s John Barker reacquainted with the Mercedes-AMG CLK Black Series, Dickie Meaden get behind the wheel of Ferrari’s SF90 Stradale and Adam Towler sit down with Gordon Murray as he runs through the details of the remarkable T.50.

Photographer Drew Gibson tells Richard Meaden about his journey on becoming one of the world’s leading motorsport photographers, while Klaus Zyciora, VW’s head of design talks through his life and cars with Antony Ingram.

We’ve also driven the LifeA110 Alpine A110, which is easier to enjoy than it is to say, Aston’s new DBX, Porsche’s new 911 Targa 4S and BBR’s MX-5 Super 225. We also ask the industry what the future of the internal combustion engine is and revisit the time we headed to the Isle of Man with a Ultima GTR.

If you can’t get to a shop or your local newsagent is closed visit magsdirect.co.uk and search evo and they’ll deliver a copy to your house post free (UK only).