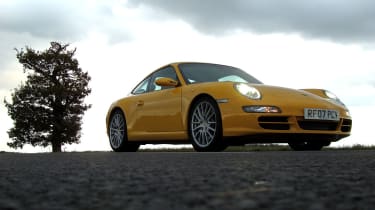 With the all-conquering 997 GT3 RS scooping both our Car of the Year and Road & Track Car of the Year titles in 2007, it’s all too easy to forget that 911s do come in less extreme guises. Sitting at the opposite end of the price list, the humble £61,620 Carrera is perhaps the easiest to overlook, yet the folly of ignoring this entry-level 911 is apparent as soon as you slip behind the wheel of one, especially if said ‘humble’ Carrera is packing the choicest performance-enhancing tweaks from the factory options list.

Those Porsche anoraks amongst you will already have spotted a clue to this Carrera’s greatness: the lower, tighter stance that betrays the fitment of the £1030 sports suspension option, which features re-rated steel springs and dampers, drops the ride height by 20mm and also slots a limited-slip differential between the rear wheels. To this we’d suggest you add a further £1256 for Carrera S-sized 19in ‘SportDesign’ wheels, £1216 for the sports exhaust system and a final £530 for the Sport Chrono Package Plus, which sticks a timer and a Sport button on the dash, the latter of which engages a keener throttle mapping and turns up the volume on that exhaust.

Adding up to just over four grand, this collection of options transforms the basic Carrera into a more satisfying and still significantly cheaper car than the £68,750 Carrera S. Indeed, we reckon it to be the ultimate all-round 997 money can buy.

Although a GT3 or GT3 RS is surprisingly useable, each remains a positively hardcore choice, and it’s amazing how much more welcoming and approachable this Carrera is for everyday, all-weather use. Yet as we discovered on our favourite UK roads – and a recent trip to a wintry Nürburgring Nordschleife – the chassis tweaks endow it with a level of tactility and expertly measured aggression that elevate it way beyond the standard car without compromising its versatility or making it any more intimidating or malevolent.

The 3.6-litre engine is smooth and keen, and always feels good for more than the claimed 321bhp and 273lb ft, and while there are more powerful cars out there for the money, a top speed of 177mph and a sub-5.0sec 0-60mph time still equate to breathtaking pace on road or track. In short, while models like the GT3 and GT2 mean this optimised Carrera is unlikely to be all the 911 you’ll ever want, it’s undoubtedly all the 911 you’ll ever need.