How does the new V6 powered GTS fare? 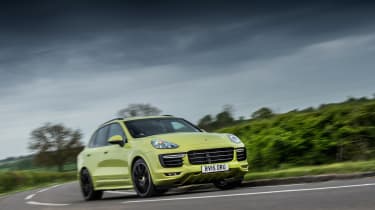 Following 2014’s update to the Porsche Cayenne this is the new GTS model, the most driver focussed of the company’s large SUVs, although everything is relative when we’re talking about a 2110kg SUV.

As with previous Cayenne GTS models, the new model is based on the regular S model but has been driven down the Turbo model line to receive a number of upgrades. These upgrades include a Turbo front bumper, Sport Design bodykit (deeper side sills and wider wheel arch mouldings) and 20-inch RS Spyder alloy wheels.  The brakes have also been taken from the Turbo, which means 390mm discs and six-piston callipers on the front, 358mm and four-piston callipers on the rear axle.

Inside there’s alcantara a-plenty, including covering the new 918 inspired steering wheel and the centres of the eight-way adjustable GTS sports seats.

The 3.6-litre twin-turbo V6 engine is taken from the Cayenne S, and as with previous generations of GTS models Porsche has extracted some extra power and torque from it. Power is up 26bhp to 436bhp and torque to 443lb ft (up 63lb ft).  As with all Cayenne’s it runs permanent four-wheel drive through an eight-speed Tiptronic S gearbox resulting in a 5.2second 0-62mph time (5.1secs if you specify the optional Sport Chromo package). Top speed is an irrelevant 162mph.

The biggest technical change is that this is the first Cayenne GTS not to be fitted with a normally aspirated V8 engine, that engine having been dropped when the Cayenne range was updated in 2014. It means this GTS looses the distinctive V8 roar that has entertained so many since the GTS was first introduced in 2007.

The Cayenne GTS’s chassis combines conventional steel springs with Porsche Active Suspension Management (PASM) and lowers the ride height 24mm over a Cayenne S. If go for the optional air suspension that ride height drop is only 20mm.

Despite its sporting pretensions the GTS doesn’t sacrifice any of its off-road capabilities, with the switchable terrain modes of the Porsche Traction Management (PTM) retained.

There is something slightly unhinged about an two-tonne SUV having the performance of a hot hatch, and while it’s not very evo cars like the GTS do have an appeal. The latest Cayenne GTS puts in a remarkable performance on any given road but the switch to a turbo-charged engine has robbed is of its character.

The new 3.6-litre V6 twin-turbo is an impressive motor, the turbo’s spooling up quickly and eliminating any noticeable lag. Peak torque arrives at a lowly 1600rpm and stays with you all the way to 5000rpm (peak power arrives at 6000rpm) giving the GTS no issues getting off the line and swallowing whole lengths of road at an impressive rate (it feels Golf GTI in a straight line). But the loss of the V8 burble and that normally aspirated power delivery has robbed the new GTS of its edge. Its engine delivers the numbers but with all the character and soul of a digital watch, compared to the mechanical hand made timepiece of the outgoing engine.

The rest of the Cayenne GTS is typical Porsche with impressive body control and the chassis manages the car’s bulk with impressive calmness. Of the three chassis modes offered via the PASM dampers, Comfort is best for long motorway miles, Sport for everything else and Sport Plus for that rare (if at all) excursion onto a track. Like all SUVs, there’s nothing you would call feel from the steering, and while it’s light by Porsche standards it’s still direct and well matched to the speed of directional changes the car encourages when you’re pushing on.

The Turbo sourced brakes are strong and offer good feel through the pedal when you’re slowling the GTS during an enthusiastic drive. The iron discs are also far easier to modulate pedal pressure than their carbon-ceramic (PCCB) equivalents.

The large SUV market is a congested sector to operate in and competition comes from all angles. BMW’s X5 and X6 models are the closest rivals to the Porsche in terms of on road dynamics, especially the X6. Range Rover’s current Sport model is light years ahead of its predecessor but against the Porsche it still feels too heavy and compromised by its off-road ability to challenge the German on the road. In the middle ground is Mercedes M-Class, which has just been superseded by the new GLE which goes on sale in September.

But the Cayenne as a whole is getting on a bit now – this current facelift is based on the gen2 Cayenne launched in 2010, and even that was more of a heavily revised version of the original rather than an all-new model – and against its rivals it’s beginning to show its age. There is still nothing like it when it comes to offering exemplarily on and off performance, but if you can live without the latter there are better alternatives.