Straight in at the deep end with our long term new arrival, Renaultsport's Mégane R26.R 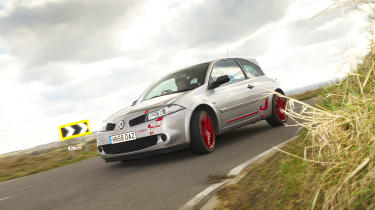 Is it really that good?’ asked a friend the other day when we were out on our mountain bikes and I told him what my new long-termer was. And I can understand the question, because despite the praise and accolades that have been heaped upon the R26.R, it must be easy to be slightly baffled by the ultimate Mégane if you haven’t driven it. Even in our own letters pages (evo 128) it has been accused of being nothing more than a Max Power car with a warranty.

Yet when you actually examine it, the R couldn’t be further from a modifier’s ideal. There’s no dustbin-lid turbo for a start, in fact there’s been no attempt to tweak the engine at all. Yes, there is a bigger rear wing, but it’s hardly enormous and there are no other additional skirts, lips or useless aerodynamic ephemera glued to the body; likewise the only carbonfibre on the car is real and is there for sound engineering reasons. Meanwhile, the lack of ‘ICE’ would no doubt bemuse the cruising crowd just as much as the idea of softening spring rates to improve a car’s handling would confound your average backstreet tuner.

So, now that I’ve got that off my chest, let me introduce HN58 OAZ. The spec is as follows: Nimbus Grey paint (£375), red wheels (standard), a roll cage and semi-slick Toyo Proxes 888 tyres (£700 together), a titanium exhaust (£2250) and electric mirrors (£150). If you’re wondering what the devil electric motors are doing out there in the door mirrors of a supposed lightweight, well, I didn’t spec them, but apparently most UK customers will, so our car has been weighed down with them too. 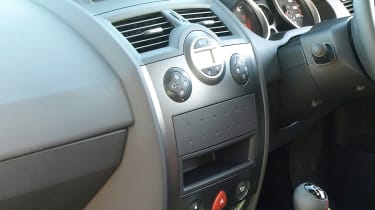 I didn’t choose the car’s colour either, but I think it’s great, making the unpainted carbon bonnet look subtle, and although I wasn’t sure about the red wheels at first (you can pay £150 to have black ones), they’ve grown on me, possibly helped by the slight dulling effect of brake dust. The only thing that really annoys me is that Renaultsport didn’t cover the entirety of the steering wheel’s rim in Alcantara and the places where they did put it are where your hands spend the least time.

My new long-termer has been thrown into the evo pool very much at the end where its tyres can’t touch the bottom. First came the snow. I looked out of the window of my parents’ house in Surrey as the first few flakes were parachuting down and decided to head back up to Buckinghamshire where I live before it got any worse. When I slithered onto the A3 the road had a thick, slushy white/brown coating and the outside lane was still full of lunatics trying to drive at Mach 3 ten feet from the car in front. With the falling snow catching in the headlights it was like the Mégane had morphed into the Millennium Falcon and was permanently jumping to hyperspace – a sensation which more or less robs you of all sensation of how fast you are actually going, requiring you to fly by instruments. Three hours later I arrived home absolutely shattered.

The next big challenge for the R26.R was a planned one, namely last month’s showdown with the new Focus RS on the Col de Vence, but even this wasn’t without its problems. Harry had volunteered to drive the Mégane out there, but snow struck once more and he faltered before he got to the end of his driveway, needing a tow to get him on his way again. He eventually made it, though, which Roger Green, for one, was pleased about – he drove the Mégane back from France and reports that he had an absolute blast on the Route Napoleon on the way.

It may not have been all plain sailing so far, but I can see it’s going to be fun having the R26.R around, and yes it really is that good. Just ask Roger. 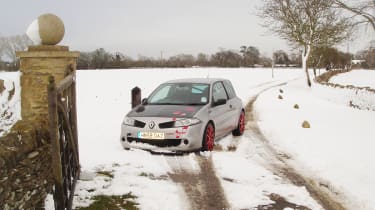