Our Renaultsport Megane R26.R got an airing at evo's first evening trackday, and it didn't disappoint 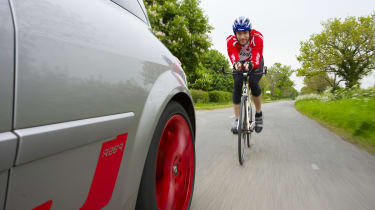 Being good and being fun are not mutually conducive. Broccoli, for example – good but not fun. That the R26.R is good round a track is a given. It really ought to be too, because if it’s going to talk the talk with its Recaros, harnesses and roll-cage then it should be able to walk the lap time. And it really did – a 1min 29sec lap of the West Circuit is simply stunning. But would it be as much fun on a trackday when you’re not against the clock?

Well, our first evo track evening of the summer arrived and I duly donned my Arai lid and headed out. Now this may sound odd, but I always get a bit nervous when I turn up to a trackday. I look at the cars hammering round (which included my old long-term Golf GTI and a very tasty blue R26.R) and always think, ‘Blimey, they’re going quick. I’m going to be a mobile chicane out there.’ Thankfully, for all the speed the Mégane generates, it’s actually very friendly, so you quickly feel completely at home and find yourself bouncing across kerbs, sliding it into corners and generally having an absolute riot. It’s definitely no four-wheeled broccoli.

My R26.R is of course now on Dunlop Sport Maxx TT tyres instead of the semi-slick Toyo 888s, and despite slightly less outright stickiness, they’re terrific, with loads of turn-in grip and good, communicative progression. Plus, when it inevitably started to spit with rain, I didn’t feel the need to run for the pits. The only thing I’m not convinced by is the ride quality, which feels a little too solid thanks to the tyres’ stiffer, Kevlar-reinforced sidewalls. 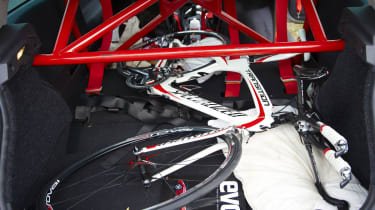 Now, time for the latest instalment in the occasional series of ‘racing circuits I have cycled or run’. The list currently stands at the West Circuit (cycled), Nürburgring (cycled), Mas du Clos (run) and Le Mans (run). This time I bunged my bike beneath the R26.R’s roll-cage and toddled off to Silverstone’s full  Grand Prix circuit.

I was there for a duathlon (which is a triathlon for people who swim like an engine block), warming up for a bigger event in Budapest (see next issue). For those of you who are interested – and an amazing number of you seem to be – the bike is another Specialized, this time a Transition Expert rolling on 26in Roval Star Fusee wheels. It’s built entirely from carbonfibre and is the bike equivalent of an American supercar in that it’s designed for straight lines rather than corners.

The entry for Brooklands probably required the most exaggerated lean, and there was an interesting moment when someone that I had just overtaken thought that an extreme inside line was worth a shot. Luffield 2 was frustrating, just as it is in a car, as you wait to get the power down when you return to the main straight.

Controversially, I hugged the pit wall for an added aero advantage out of the wind, but I still managed to take Copse flat out at the end of it. The awesome Maggots/Becketts complex loses some of its appeal when you’re struggling to reach 30mph, but the long right-hander at Club was great fun. I’m sure I was on the cusp of oversteering with almost every pedal stroke. Maybe. Alright, it was a lot more fun round Bedford in the Mégane.