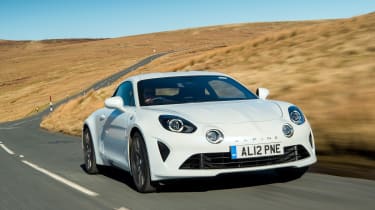 The Alpine A110 has been one of the performance car stars of the last year or so, thoroughly justifying Renault’s decision to revive the iconic nameplate. Fast, fun, compact and lightweight, it does what Alfa Romeo’s conceptually similar 4C never could – give the Porsche Cayman a real run for its money.

Alpine says the entry-level Pure is closest in concept to the original Monte Carlo Rally-winning Alpine A110s of the 1970s, and while it’s far from a basic car there’s something appealing about its… well, purity. Is it an acceptable substitute for those who missed out on the early run of Première Éditions?

> Click here for our review of the Porsche 718 Cayman T

Pure models are mechanically identical to other A110s, with only equipment changes to differentiate them from more expensive models. As such, the Pure uses the same 1.8-litre, turbocharged four-cylinder power unit as the Première Édition did when it debuted, and sends its power to the rear wheels alone through an open differential and a seven-speed dual-clutch transmission, controlled by steering column-mounted paddles. 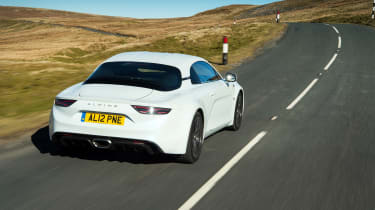 As with the powertrain, it’s the usual A110 fare here: a purpose-built aluminium mid-engined platform with double-wishbone suspension at each corner and passive springs and dampers rather than a complicated electronic set-up.

The key difference is in the size of the wheels and tyres, with Pure models getting a smaller 17-inch-diameter alloy wheel design and slightly taller tyres – 205/45 R17 compared to 205/40 R18 at the front, and 235/45 R17 versus 235/40 R18 at the rear. Each then has a similar contact patch, but the smaller wheels should deliver an even smoother ride than the A110 has already become known for.

That was the theory, anyway. It’s always a pleasure to drive an A110, but this time tainted with frustration that our test car was wearing around £6500 of options above and beyond normal Pure specification, including, notably, a set of 18-inch wheels with the lower-profile tyres. Drat.

In fairness, Alpine is only specifying its press vehicles in the way that customers might, and larger wheels are a perennially attractive option – but it’s a shame not to be able to sample the car at its most basic. 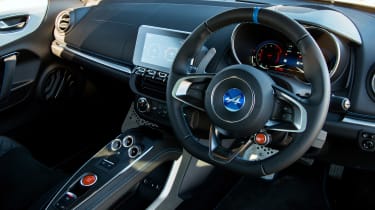 The upside? The A110 is still a deeply enjoyable and satisfying car to drive. Few performance cars feel lighter on their feet, and there are times when the car almost seems to float above the road surface. It’s not dissimilar in that respect to a Lotus Elise, but with a slightly greater bias towards comfort and away from that car’s absolute body control. For the record, that isn’t a criticism of either – each has a different goal, and neither is the worse for that.

So different is the A110 from a car like the Porsche Cayman that it initially feels quite alien. The Alpine’s steering is very light, and at first seems to lack feedback, though it does gently wriggle in your hands and follow cambers and ruts. It feels appropriate for the car’s responses though, and you’ll quickly find more feel filters through as you start to work the tyres.

> Click here for our review of the Alfa Romeo 4C

With so little weight to carry the A110 feels more agile than a Cayman though and moves around more on its tyres. It’s also deceptively fast across ground, again seemingly a symptom of how nimbly it darts from one turn to the next and how little the road surface below seems to phase it at anything other than low speeds, where it can occasionally jiggle. Only through larger dips and over more prominent crests it does become more floaty than you’d like, but what some might dismiss as a lack of body control, others might appreciate for its slightly old-school, less tied-down feel. 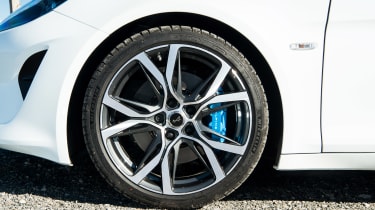 There’s an old-school bark to the engine too, particularly if Sport mode is selected. As this also delivers the best throttle response and gearshifts and seems to do little damage to the A110’s excellent economy – the official 46mpg is very easy to hit on longer runs – you’ll be compelled to run in Sport for most trips. Not only is the engine responsive (and the shifts are pretty crisp in manual mode), but it delivers a real performance hit too; this is a fun engine and ’box to keep on the boil.

Another option fitted to our test car was the full performance braking system from Brembo. If you keep your Pure pure in every other way, then this set-up would still be worth it for the superb pedal feel and strong, tireless stopping power. Though we’d be tempted by the sports exhaust also fitted… and the stunning iridescent white paintwork too, for that matter.

The A110 Pure officially starts at £46,905, making it the most affordable Alpine yet. Our test car was wearing a sticker price of £53,553, including £1656 for that paint job, £1380 for a sports exhaust, the upgraded braking system at £936, and a handful of other toys. A generally high level of equipment means you’ll miss little in terms of comfort features if you skip the options list, but it’s those wheels, exhaust and brakes that will have the greatest effect on how the car feels to drive.

The eagle-eyed will have spotted that an entry-level Alpine is still more expensive than an entry-level Cayman, which currently retails for £44,074, though the Porsche options list is even more extensive than Alpine’s, so comparison of the basic price is of limited use.

What we can tell you is that the Cayman gives you the option of a manual gearbox, denied to Alpine customers, and feels both more substantial and of higher quality than the French car – though the A110 is hardly terrible. Porsche buyers will also enjoy a little more space both for people and luggage, but the Alpine has the edge for aural appeal over the flat-four Cayman, offers better performance (the £51,853 Cayman S is a closer match here), and feels more fun to drive, more of the time – even if the Porsche is more capable at the limit.