Aside from the outstanding engine, it’s the quattro all-wheel drive system and dual-clutch gearbox that helps the RS3 produce some pretty astounding performance figures 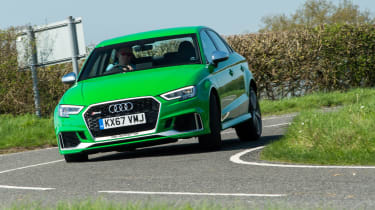 By hatchback standards the new RS3 is indecently rapid, using its 395bhp five-pot and all-wheel drive to claw to 62mph in 4.1 seconds from rest (our timing gear recorded a 0-60mph time of 3.7 seconds for the saloon. In the wet!). For the record, that’s two tenths quicker than the previous car was capable of, and puts it on good footing against its closest rivals too - a Mercedes-AMG A45 is a tenth slower (not that you’d really notice, we suspect), while BMW’s M2 Competition can manage the same sprint in 4.3sec.

In terms top speed, all three are evenly matched on top speed - the RS3 is, like its compatriots, limited to 155mph - but Audi does let customers spend money for old rope to have the limiter removed. In this specification the RS3 will hit 174mph flat out, but it’s up to you how much use you’ll get from that, balanced against the £1600 you’ll have to pay for your dealer to press the right buttons…

Regardless, the RS3 feels very brisk indeed on the road, aided by its unflappable traction even on wet roads. The S tronic dual-clutch transmission makes acceleration a quick and largely uninterrupted process, shifting rapidly in sport mode and responding quickly to tweaks of the paddles behind the steering wheel - though upshifts are executed a little more crisply than downshifts. 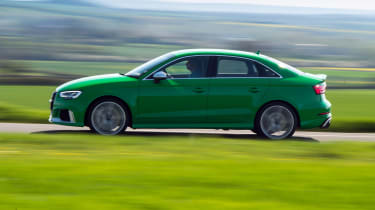 Back in the transmission’s normal mode the shifts are slurred like a traditional automatic gearbox, but the same mighty performance is always on tap regardless of your driving mode. One demerit is the transmission’s behaviour at very low speeds, such as nose-to-tail driving in town and low-speed manoeuvres, where the clutch can disengage quite abruptly and shunt you along inelegantly. It's irritating at first, but the more time you spend with it the more this trait becomes seriously frustrating.

Fast driving is also let down a little by the brakes. There’s no doubting their power, but in the examples we’ve tried, with the optional carbon-ceramic front discs, the initial pedal travel is quite grabby, making smooth stops difficult to achieve. They’re better when used with more conviction (and a few track day heat cycles) though, with a firm feel and plenty of stopping power.

One thing enhances the driving experience almost all the time however: the engine. It makes this car feel genuinely special whether you’re rumbling around town or roaring down an open road. When the exhaust flaps open - at higher revs in Comfort, and almost all the time in Sport - the sound that emerges is almost on-par with the V10 in Audi’s R8, and quite dramatic when pops and crackles emerge from the exhausts with each gearchange.