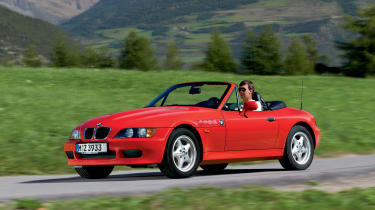 BMW’s latest Z4 might share its architecture with the Toyota Supra, but its Z3 predecessor of the 1990s was altogether more humble. Pitched not as a GT or high-performance sports car, it instead served as an upmarket alternative to Mazda’s MX-5 or the MGF – though with in-line six and eventually Z3 M variants, Porsche-rivalling performance was never far away.

Now near the bottom of its depreciation curve, the Z3 lives in the shadow of more prominent roadsters of the era such as the MX-5, the Lotus Elise and the Porsche Boxster, but represents conspicuously good value for money.

While base versions aren’t as sharp as the MX-5 and the straight-six cars not as involving as a Boxster, the Z3 can still entertain on the right road, and the pseudo-retro styling, small footprint and silken six-cylinder engines are characteristics in short supply in the new car market. 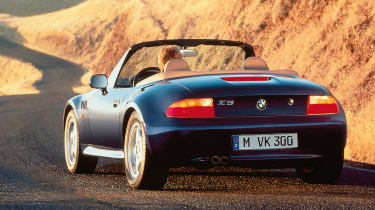 The Z3’s unveiling in 1995 wasn’t without precedent. BMW had of course produced the Z1 from 1989 to 1991, best known for its unusual drop-down doors, but it was 1990’s Ur-Roadster that perhaps previewed the Z3 most accurately. While its styling was a long way short of the eventual mark, the long-bonnet, short-tail proportions were present and correct, as was the rather bulbous front end with its prominent front arches and protruding grille.

The end result was more cohesive, and comprised retro touches inspired by the brand’s classic 507 roadster, including the Coke-bottle curve from front to back and the gill-like vents in the front wings, carrying the BMW roundel – a motif that lasted as long as the second-generation Z4 but has since been ditched on the most recent model.

While BMW had moved to its Z-axle rear axle arrangement with the contemporary 3-series, the Z3’s compact platform was, like the appropriately named 3-series Compact, instead a mixture of E30 and E36 parts, using the former’s front end but the semi-trailing arm arrangement from the rear of the latter. 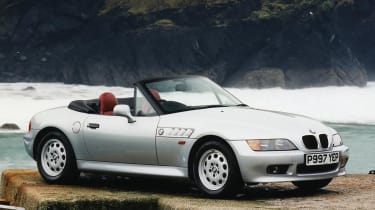 That, along with the initial availability of an underwhelming four-cylinder model and crass product placement in 007 flick Goldeneye, initially led to a lukewarm reception for the Z3. Heavier and less agile than the similarly sized MX-5, less cohesively styled than the Mercedes-Benz SLK that debuted around the same time, it took 1997’s introduction of a 2.8-litre in-line six to add some pep to the Z3’s step, at which point it was tested more frequently with Boxsters and SLKs than the less glamorous offerings from the class below.

It was the BMW M department that showed the car’s true potential. First arriving in 1997, the M Roadster brawled onto the scene with bellicose bodywork, and under the bonnet, the S50 in-line six from BMW’s contemporary E36 M3. With 316bhp it outpunched the 2.8 by well over a hundred horsepower and catapulted the Z3 M comfortably above the Porsche Boxster S for power – it would take 2001’s Mercedes-Benz SLK 32 AMG to offer more from its supercharged V6. By then, the Z3’s other variant had already appeared – 1998’s M Coupe, one of the most curious-looking cars BMW had ever built.

Regular non-M versions of the Coupe were sold overseas, but in the UK the M was unique, looking like someone had attached the E36 Touring’s roofline to a sports car. It’s nevertheless become a cult icon, attracting colloquial nicknames such as ‘bread van’ and ‘clown shoe’, and was talented enough to be included in 1998’s evo Car of the year (issue 003). In 2001, both variants adopted the 321bhp S54 engine from the E46 M3 that had debuted in the interim.

Development didn’t stop at the M models, with a facelift in 1999 that modernised the lights and tidied the interior, though changes weren’t adopted by the Z3 M. Four and six-cylinder engines were revised with greater capacity and output, a 2-litre in-line six was introduced (later upgraded again to a 2.2) and there were some other detail changes. The model eventually bowed out in 2002, replaced by the more sophisticated and more dramatically styled Z4. 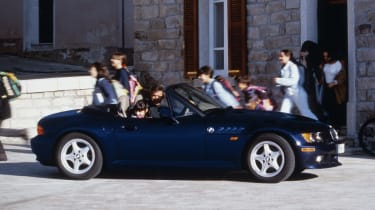 ‘It’s barely credible how the car has been totally transformed by little more than the addition of a tin roof. Suddenly it all feels so much more positive, so much more together. Throttle, clutch, gearchange, drivetrain – all now seem to function with the tightly engineered feel you’d expect of a Beemer.

‘The six’s totally linear delivery means the throttle acts almost like a rheostat – no sudden explosion, no unexpected gobs of torque, just a steady surge that builds to a dizzying rush as the revs approach 7. No unintended oversteering moments either; the M Coupe is far sharper handling than the Roadster but it’s still more inclined to drift wide should you overcook it.’