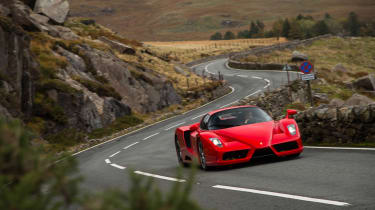 In the world of high performance, limited run hypercars, few brands have the reputation of Ferrari. The legendary Italian manufacturer has specialised in exotic vehicles like this for its entire existence, but when it comes to the truly bedroom wall worthy machines of which schoolboy dreams are made, few of Ferrari's efforts can match the Ferrari Enzo released in 2002.

At that time of maturing engine technologies, the Ferrari Enzo perhaps best represented the breed of naturally aspirated, mechanical hypercars built before today's thick veil of electronic intervention had fully materialised. With 650bhp, a claimed 3.1s 0-62mph time and a 217mph top speed, the Enzo had figures that spoke for themselves.

Indeed, the Enzo was such a landmark, Ferrari named it after the founder himself, Enzo Ferrari and slapped a £450,000 pricetag on the nose. Predictably, given what a Ferrari Enzo costs today, that 2002 upfront cost looks like a bit of a steal.

Ask someone on the street to name a supercar and they will probably say Ferrari first. Italian passion, history and romance cling to the prancing horse like rust to the underside of a Lancia Beta.

The concept of a hypercar is one only coined in recent history, yet Ferrari was making them from its inception, not as an exercise of pride, but to fund Enzo Ferrari’s passion for racing. As such, the linage preceding the Enzo is a distinquished one. The first of the Enzo’s direct forbearers didn’t come until 1984, when Ferrari introduced itself to turbocharging with the 288 GTO. 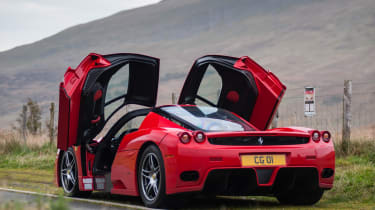 Like the first Ferraris, the 288 GTO was designed specifically as an homologation special, allowing Ferrari to compete in an upcoming Group B race series. This model took the bones of a series-production Ferrari 308 GTB, but replaced its transversely mounted 3-litre V8 for a twin turbocharged 2.9-litre V8 mounted longitudinally. Carbonfibre and Kevlar bodywork featured for the first time on a Ferrari, creating the first modern Ferrari hypercar

The 288 GTO was genesis, but it also formed the base of one of Ferrari’s most iconic models, the F40. Launched just 4 years after the 288 GTO, the F40 was not designed for the racetrack, instead it was made to thrill on the road. The F40, made to celebrate Ferrari’s 40th birthday, was the first Ferrari to base itself off a carbonfibre chassis, with subframes carrying the drivetrain and suspension components outside of the main cabin.

Heralded for its exquisite driving characteristics and intense twin turbo V8, the F40 was a tricky car for Ferrari to supersede, and the car they did it with felt the heat right from its introduction. In 1995 the F50 dropped the turbocharged V8 engine in favour of a highly strung V12, itself a development of Ferrari’s contemporary Formula One engine. The F50 was criticized for it’s harsh engine and tricky driving dynamics, but again represented a time of distinct development for the V12 engine.

The Enzo, launched in 2002, is the culmination of these previous iconic models, taking lessons learnt from each to form the basis of what could now be called the contemporary hypercar. The Pininfarina designed body might not be the most classically pretty design to come out of Modena, but the Enzo’s sharp detailing and Formula One derived aerodynamics informed the design to an extent unseen in previous Ferraris.

Without the large rear spoilers of its predecessors, the Enzo required clever aerodynamic tools to produce downforce and eliminate lift. The low, angular front helped pin the nose of the car down in a faster corners, meanwhile the rear diffuser and flat floor negated the need for a large rear spoiler. At speed, a smaller rear spoiler would still rise to assist the rear aerodynamics.

Limited to a production run of just 400 units, (the final build model was gifted to the Pope), the Enzo eventually went on to form the basis of the track only FXX. Maserati created its own derivative using the same component sets, calling it the MC12. The MC12 was limited to 25 units, although its main purpose was to homologate the MC12 race car for the FIA GT Championship.

The Ferrari driving experience has always had one dominating factor, the powertrain. The Enzo is the last naturally aspirated, non-electrically assisted hypercar from the Italian manufacturer, and the V12 used was more than enough to satisfy the moniker.

Forming the foundation for every subsequent Ferrari V12, the F140 engine was introduced in the Enzo, setting the record as the most powerful naturally aspirated engine in the world at the time. With four valves per cylinder, dual overhead cams and variable valve timing, the Enzo produced a maximum power output of 650bhp and 485lb ft of torque. 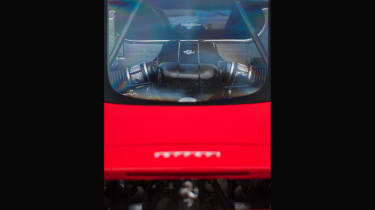 The performance figures were rightly impressive, with the Enzo shooting to 62mph in 3.1 seconds and onto a 217mph top speed.

Harnessing this power is a 6-speed automated manual transmission, a development of prior systems. Ferrari were able to upgrade the hardware and software compared to previous iterations to give the Enzo lightning fast shifts up and down, and set the template for its world leading semi-automatic gearboxes.

Again based on the developments made in prior Ferrari hypercars, the Enzo’s independent double wishbone suspension featured pushrod-actuated shock absorbers of which were adjustable by the driver. Braking was handled by Ferrari’s latest set of carbon ceramic brakes, offering enormous stopping power without the threat of significant fade. 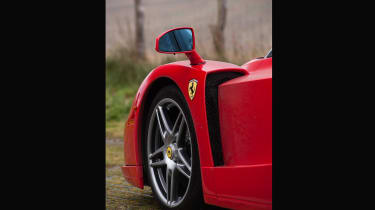 The Enzo offered a super quick steering ratio, something that could only be supported by the immense front-end grip available, and although it is not the most feel-some steering setup, it does offer extreme accuracy and is confidence inspiring, a non-negotiable when talking about a near 220mph hypercar.

Like it’s predecessors, the Enzo was designed to push the performance boundaries of what was possible in a road car. The interior treatment could be called ‘pared back’ as a result, with carbonfibre inhabiting most surfaces, and comforts like electric windows and a stereo all sacrificed in the quest for a low kerb weight. 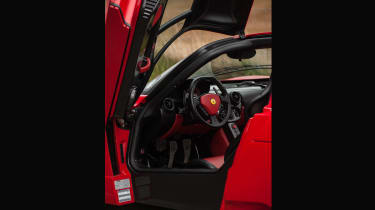 The notion of this era being the height of naturally aspirated engines was not one just inhabited by Ferrari. In 2002, rival manufacturers were also on the cusp of launching momentous cars of their own. From Mercedes-McLaren and Porsche came hypercars with corresponding performance capabilities to give the Enzo some proper competition.

Mercedes-Benz and McLaren had decided to progress their technical partnership in Formula One to create the contrived SLR McLaren. The carbon bodied 617bhp hypercar utilised a version of Mercedes-Benz’ 5.4-litre supercharged V8 engine and a 5-speed automatic gearbox. Although incredibly quick in a straight line, the SLR’s GT aspirations meant it was not as sharp to drive as the Enzo.

The Porsche Carerra GT was a bigger threat, itself utilising a spectacular naturally aspirated 5.7-litre V10 engine based off an abandoned world endurance car project. The Carrera GT matched the carbon ceramic brakes, carbon tub construction and pushrod suspension of the Enzo. Although it 'only' had 603bhp, it more than made up for that with driving thrills.

“Big speeds are incredibly easy in the Enzo. It’s like the car is covered in a special layer of Teflon, allowing it to slip effortlessly through the cool night air. In fact, this side of a Veyron, I can’t think of a car that builds speed quite as easily as the Enzo. You do need to be alert, though, as it feels nervous at high speeds, thanks mainly to the ultra-sharp steering.”

"The Ferrari’s steering has the same sharpness of response as the Porsche’s, but it lacks the level of detail in feel; with the Enzo you sense the limits more with your backside. The V12 engine is more responsive at lower revs but it also matches the top-end rush of the V10. It’s gloriously brutal, and in Race mode you get a thump in the back every time you flick the right-hand paddle and a new ratio hits home. Downshifts kick in so hard they can briefly jink the whole car sideways. Be in no doubt, this is a car that always feels alive underneath you."