Before 2011 McLaren had built just two production models, and they could hardly have been more different. Neither could their reputations… 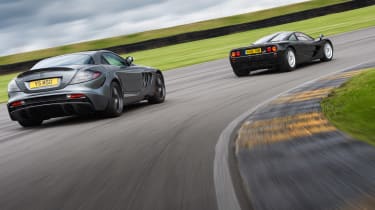 Black-sheep McLarens. Seriously. That’s what these two are, and that’s how they feel today. Sitting in the Anglesey sun, the McLaren F1 and the Mercedes-Benz SLR McLaren stand out visually, acoustically and, as we’ll discover, dynamically against the latest McLarens.

In many respects they don’t feel like McLarens at all – certainly not the McLarens we’ve become familiar with since the Woking marque returned to road-car manufacture in 2011. They lack the indomitable cohesiveness of the modern Macs, the feeling that a similar amount of blood, sweat and (engineering) tears was poured into the indicator-stalk function as the high-speed DRS activation. Take the styling. The F1’s profile – all Hawk-fighter rake – is a lesson in profile design. But its rear lights? Round. Boring. Taken from a Bova coach. And yes, I’m aware of the tooling costs associated with making your own lights for a low-volume car, but can you imagine a modern McLaren with Bova coach rear lights? And the interior? High-art titanium pedals juxtaposed with a smattering of lowbrow Ford switchgear? Well, it’s a bit rubbish. 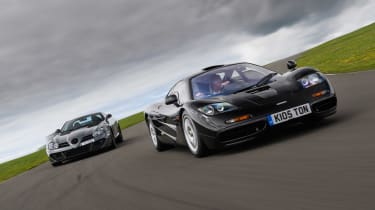 But, of course, you soon forget this when you fire up that BMW V12. You instantly feel plugged into a place where every synapse is overwhelmed and you feel giddy, excited, terrified, faint even. The legend of the F1 contributes to this feeling – I mean, this is a McLaren F1 for godsakes, and you’re driving it – but so does the tangible experience. You sit in the middle, your back aligned with the crankshaft and your ears inches from the overhead air intake. It is, and remains, the perfect – and I mean perfect – driving position.

You engage first gear with the stubby lever then clutch-out from idle, yet no McLaren since 2011 has had anything other than a twin-clutch semi-auto gearbox. Of course, you gorge on it, shifting more times than is necessary in a car that weighs 1137kg and has 479lb ft. The F1 yelps at clumsy shifts or asynchronous heel-and-toe efforts. It takes a little while to adjust your inputs, to finesse. You soon discover that the F1 responds better with speed, with more load on its axes. You learn to accelerate harder, to feel the surprisingly soft suspension compress the tyres into the road. You learn to increase your apex speed and feel the grip gently blend into understeer. This happens at a much lower speed than you were expecting, too – a 540C on its modern tyres would murder an F1 for ultimate grip – but again it doesn’t really matter, because the F1 is engaging you in the process at every step of the way.

As grip turns to slip, you notice another contrast with modern McLarens – the unassisted steering is heavy and slower to respond. The load on your arms and the lazier response forces a more disciplined approach to driving. You don’t want to throw the car in and adjust your trajectory multiple times during a corner as you can in a modern Mac, because you’re unlikely to rescue any big slides. So you tend to drive it like a big GT (ironic, huh?), with smooth, deliberate and precise inputs that in turn generate a deeply satisfying feeling of carving. This, combined with the central seat and the wide canopy, conjures a sense of being a fighter pilot on a low-level canyon run.

During acceleration it’s different. Very different. The engine pushes so much power against so little weight, and does so with such startling immediacy, that gearshifts are required with incredible frequency. Fast ones, too, because if you fumble a shift, you lose the magic inherent in wringing out an F1, that of precisely orchestrating multiple mechanical interactions within the car with minimal and deliberate actions from your limbs. Also, the thought of mis-shifting in an F1 is, well, let’s move on…

With 560bhp per ton the F1 is bettered only by the twin-turbocharged, electrically assisted P1 for power-to-weight in a McLaren road car (658bhp per ton). But crucially, the P1 doesn’t feel faster – merely different. The F1’s sense of speed is defined by the pause-bang moment during the gearshift, the P1’s by a ceaseless feeling of G-force. Consequently, the P1 feels more impressive and the F1 more satisfying.

The fanfare surrounding the McLaren F1 is justified, but the car is not perfect, and in many ways is wildly bipolar. It handles like a GT car and yet goes like a Can-Am racer. Its throttle response is electric but its brakes are lazy. It handles safely and securely but it is not an expressive, chuckable and exploitable car – not on the road, at least. None of these characteristics erode the essential magic of the F1, but they do provide a lingering impression as you jump from the first McLaren production road car to the SLR – a car seemingly defined by its bipolarity.

First shown in 1999 as the Vision SLR concept, it looked like an ultra-GT but promised supercar performance and theatre. The styling remains as brutally dramatic as it was before the new millennium rolled in. Long of nose and short of tail, with cues from Formula 1 cars and a dash of Moss’s 300 SLR, it looked fantastical – steampunk, even, as if Jules Verne had a hand in its creation. 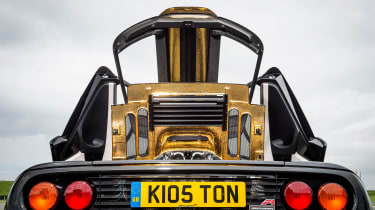 At the time, Mercedes owned a 40 per cent stake in the McLaren Group and the car was handed to Woking’s technical boss at the time, Gordon Murray – arguably the greatest automotive imagineer of the 20th century – to productionise. The process took more than four years, and the collaboration was not without conflict.

Today, from a styling perspective, the SLR still looks extraordinary – more so with updated looks from McLaren Special Operations. The car we’re driving is the McLaren Edition SLR, one of 25 SLRs with carbonfibre bumpers, improved underfloor aero, a larger rear diffuser, a new airbrake, lightweight carbon side panels and engine-cooling vents, and wheelarch air vents. Nothing, not even a P1 GTR, drops jaws quite like it.

The doors open as a supercar’s should: up and out. You then climb over a wide sill – part of the carbon chassis construction – and settle in a cockpit that’s pure GT. But while comfortable and ergonomically sound, if a little cramped, the interior is not befitting of a car that cost more than £300,000 when new. The MSO carbon cladding does a good job of softening the original SLR’s overwrought silver flashes, but the interior remains unspectacular and dated. You do wonder, however, if like with the F1 your criticisms will fade when you start the engine…

The starter button, under a flip-up cover, glows red. And when you press it, your ankles then your shins, knees, chest and ears are subjected to a domino-ing explosion of noise and vibration. If you’re left underwhelmed by the interior appointment, the rumble from the engine immediately lifts your spirits. Side-exit exhausts rule. All sports cars should have them. You feel closer to the combustion – the kind of thudding combustion that happens within 5.4 litres of swept volume in the SLR’s supercharged V8. You don’t feel the level of connection you do with in the F1, but it’s an increasingly rare and joyous feeling to be so close to the fire inside the engine. The modern McLaren V8 (smaller, turbocharged, significantly more advanced) disguises most of this combustion activity (not in the 675LT, though, which delivers a satisfying rifle-shot during the gearshift when Sport mode is selected).

Does the 617bhp V8 feel like a supercar engine? Not quite. The supercharger screams, but you’d rather it was revs making the histrionics; you’d have more bandwidth to play with. Instead you shift earlier and ride the torque – like in a big GT. That’s not to say the SLR isn’t fast. It is. Back in 2004, our own Richard Meaden coaxed a 0-100mph time of 8.5sec – in the wet. Today, in the dry, it feels as rapid as the F1 and almost as quick as a 675LT. And that’s where the similarities with modern McLarens end...

This is the best SLR, no doubt. MSO has softened the overly darty steering that blighted the early cars and locked the hinge that seemed to link the front and rear axles. The SLR had a very good ESP system, but it needed it because when deactivated the car was continually out of sync fore and aft. The hyperactive steering would never relax enough for you to measure out appropriate corrections, so corners became serrated and you’d saw at the wheel like a child playing at being a rally driver. Combine this with the frankly preposterous level of torque reaching the road via the rear wheels and you could never homogenise steering and propulsion, the pair often being indistinct from one another. With this version, MSO has tamed this to the point where it remains a characteristic but one that isn’t as frustrating or as terrifying as it once was. 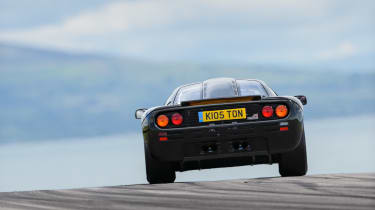 But, unsurprisingly, as a package the SLR is a world away in terms of philosophy and delivery not only from the modern McLarens but from the F1, too. You can actually feel the tug of war between McLaren (and Gordon Murray) and Mercedes in the dynamic behaviour, which may score curiosity points (and can be defined as ‘character’), but it makes for an unusual beast. Today the SLR remains an oddball – misunderstood, but understandably so. It has, however, established a following, and with 1400 or so built, MSO’s improvements and upgrades make decent business sense and even better practical sense if you’re an owner. I mean, why wouldn’t you? What MSO has done is to round-off the car’s edges and blend the SLR’s GT and supercar sensibilities in a way that the original team never did. The result is a terrifically and fiercely unique driving experience – one that we’re unlikely to see again.

A fascinating postscript is that the car Gordon Murray originally envisaged the SLR to be was mid-engined, naturally aspirated and more than 200kg lighter than the SLR. A totally different car, then. Aside from the breathing, the first of the modern McLarens, the 12C, was 200kg lighter and mid-engined. It combined the GT and the supercar in a way the SLR never did – and over the page it meets Woking’s latest supercar.