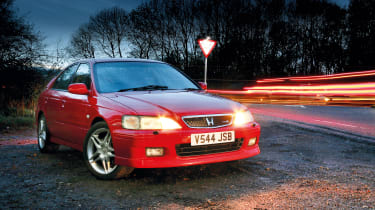 The Honda Accord Type R belonged to a category of car that effectively no longer exists: the sports saloon. Once populated by Mercedes 190 2.3s, Peugeot 405 Mi-16s and brawny but compact six-cylinder 3-series, their modern equivalents have grown portly, the more blue-collar models have been absorbed by crossovers, and M3s and C63s now occupy a different space entirely.

We can be thankful to Honda then for having a proper go at it before the segment disappeared. Just as they did with the Civic and Integra, Honda’s engineers turned their humdrum family wagon into a lighter, more focused sports car, complete with screaming engine, less weight and sharper handling.

That made the Accord Type R one of our favourite sports saloons at the time, up there with Impreza Turbos and Mitsubishi Lancer Evos, and with nothing quite like it on the modern market, it’s still a desirable performance car today.

Honda Accord Type R in detail

The arrival of a new Honda Accord is rarely a groundbreaking event, and when the sixth-generation Accord arrived in the UK in 1998 it’s fair to say that while it was an improvement upon its staid predecessor, it was unlikely to topple the popularity of models such as the Mondeo, Vectra, Laguna and 406.

Honda itself was making moves on the enthusiast market however, with the DC2 Integra Type R finally hitting the UK the year before, the NSX still on sale, and high-revving VTEC versions of the Civic and Prelude offering something just a little different from the norm. 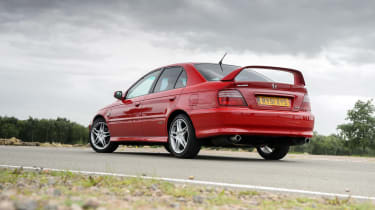 The arrival of the Accord Type R in 1998 then was something of a surprise. While it shared the same bodywork as its conventional counterpart – Honda’s ‘CH1’ chassis designation, an Accord developed specifically for the European market – it seemed to share little under the skin beyond its basic double-wishbone layout, a Honda staple.

Like other Type R models, the Accord went on a diet, with less sound insulation and even the removal of the inside trim for the bootlid, while the chassis was strengthened at necessary points. Stiffer bushes were used in the suspension, with the springs and dampers both lower and firmer than standard, and equipped with thicker anti-roll bars. Even the wheel bearings were upgraded, while the 17-inch alloys (wrapped in 215/45 Bridgestones) shrouded brakes nabbed from the NSX.

It didn’t have the engine from the NSX, but its Prelude-derived 2.2-litre engine wouldn’t be far off. In typical Type R style the four-cylinder unit was hand-finished, with particular attention paid to reducing friction, and lifted output from the high 180s to 209bhp at 7200rpm. 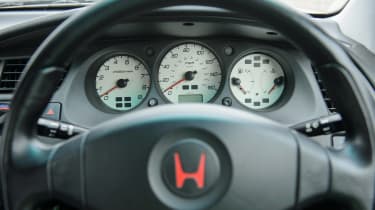 And while its 158lb ft torque peak at 6700rpm sounds as peaky as Honda motors of legend, the extra capacity compared to Civics and Integras resulted in a much less frantic delivery – despite the usual step as the spikier cam lobes were activated. A five-speed manual transmission and limited-slip differential helped transfer power to the road.

Honda’s weight-saving measures helped too. A 1306kg kerb weight doesn’t sound spectacular in the wider context, but it made the Accord 50-100kg lighter than equivalently powerful rivals of the time, such as the Ford Mondeo ST200, Vauxhall Vectra V6 GSi and Alfa Romeo 156 V6.

And when evo compared them back to back in 1999, it was an easy victory for the Honda, which outpaced the next-best car, the Mondeo, in both straight-line speed and where it mattered most, in tactility, agility and fun. It was the only one to really justify comparison with the super touring versions racing in the BTCC – even if it was never quite as successful on track as it was on the road. 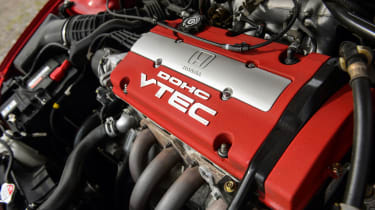 The Accord Type R lasted until 2002, by which time it was joined by the EP3-generation Civic Type R in Honda UK’s line-up, and with 2002 marking the starting point for production of the seventh-generation Accord the Type R’s days, at least in the UK, were numbered.

Honda did continue building Type R Accords, albeit badged Euro R – just like the even more focused, 217bhp CL1-chassis Accord R Honda had sold in its home market since 1998. Examples of both generations of Euro R sometimes find their way onto the UK used market, but for value there’s little to touch the UK’s own Type Rs.

‘You know the VTEC scenario. Average action up to about 5000rpm, then kapow! the bomb detonates. In the zone, the Type R’s 2.2-litre four doesn’t just haul harder than the other engines here, it does it with more “tingle” factored into the experience. Between 5800 and 7400rpm in second, third and fourth, the small hairs on the back of your neck wriggle every time.

‘On these fast, sweeping but occasionally lumpy and camber-unfriendly roads, the degree of structural integrity these measures bring to the party is extraordinary. The Accord Type R is one of those rare cars that doesn’t have to sacrifice control for comfort: it has both. Its firmness keeps the Potenzas planted to the tarmac but doesn’t allow sharp inputs to upset the body’s composure. Very special indeed.’