The Lexus LFA’s long-winded gestation may have put a dampener on our initial enthusiasm, but the LFA really is something special 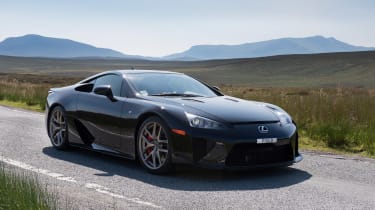 Dubai, it was, and a roundabout on which I was attempting to drift a McMerc SLR 722 Edition for the camera. In the distance, growing rapidly larger, was an early and dog-eared Lexus LS400 in characteristic pearlescent white. Suddenly it was upon us, travelling at impossible speed. Had the driver even seen the roundabout? How big was the crash about to be?

No crash. Instead, the talent behind the wheel hurled the squirming, squidging LS into a gloriously smoketastic slide which he sustained for 540 degrees before hurtling up the sliproad to the nearby motorway. He then spun the Lexus in its own length on the sliproad as an encore, tyres now a lot hotter and a bit balder, before vanishing into the heat haze. He was not an average LS driver. He would have loved the LFA.

This is a car born to the powerslide. No need for the bung; it practically bungs itself. Just ahead of the driver, and still well back in the chassis, is a 552bhp, 4805cc V10 able to blip from idle to 9000rpm in 0.6sec. No tachometer with a physical needle can keep up with this, according to the keeper of the LFA’s Shinto spirit, chief engineer Haruhiko Tanahashi, who has said that, when the time comes, he intends the LFA to be his transport to heaven. So the LFA has a TFT screen image of a tacho instead. 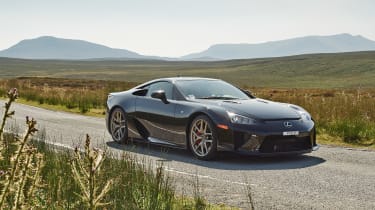 That means the tacho can morph to suit your expectations. Normally it has white figures on a black background, evenly calibrated from zero to 10,000rpm (even though 9K, a sufficient crankshaft speed by most standards, is the limit and the whole tacho area flashes orange as you approach and red once you’re there). Switch to Sport, and it becomes black on white. Not only that, the scale compresses below 4000 and now ends in a higher, more readily visible place. Makes sense. It’s not often you’re below 4000rpm in the LFA.

The Nürburgring GP circuit beckons. I belt myself into a cabin artfully defined in aluminium and carbonfibre, echoing the way the LFA is constructed. Originally the whole structure was to have been of aluminium, but given the LFA’s role in the greater Toyota scheme (of which more anon), the project screeched to a halt a couple of years ago. When it restarted, the centre section and all the outer panels had been reborn in the lightweight composite, with aluminium frames at each end to take engine and suspension.

It’s a cabin like almost nothing else. Pressed for an influence, I’d say 1950s Americana meets 1980s Japanese via the highest-tech of race-car workshops. The slatted metal vents, the way the dash-top curves under itself, it all shouts Breeze-O-Matic from an impossibly optimistic brochure hyping the fantasies of a mad designer in Detroit. Mr Tanahashi doesn’t see it this way. Better to concentrate on the fact that the leather part of the steering wheel is shaped more like handlebars, then. 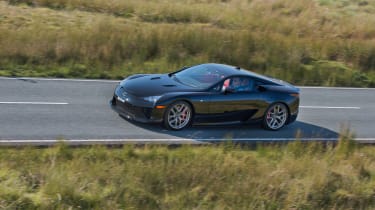 This is suggestive of quick steering. Which, as I am about to find out, is both the LFA’s frightener and its salvation. Blast out of the pitlane, savouring the sheer savagery of the throttle response, brake hard for the first quick bend. I expected the brakes to be powerful because the discs are of carbon-ceramic composite and the front calipers have six pistons each. That they are also progressive, with a firm, solid pedal, is a bonus because CC brakes often lack these attributes.

Now turn. A chassis engineer might say the LFA has a lot of yaw freedom. I say it feels as if the rear tyres have lost their air and a spin must now be inevitable. Luckily this doesn’t happen, but this is one mobile tail, which the explosive throttle and a degree of rear-end instability under hard braking do nothing to calm.

And then it all starts to make sense. You drive through the bluster, realise it’s not the prelude to a clash of wills, discover a supercar more forgiving than you would ever have guessed. Let the tail move out, then lean hard on it, applying more and more power as any residual nose-drift ebbs away and the trajectory becomes throttle-variable in the most fantastically positive, connected way.

Now the steering feels precise, tactile, credible despite being electrically assisted via, even less promisingly, a motor mounted on the column rather than the rack. And the engine is mighty, of course, hurling the LFA along each straight with a dense shriek like a V10 Formula 1 car used to make, ready to help flick the LFA through tight esses, able to bury inertia as if it had never existed.

And the gearbox? Like the Yamaha-developed engine, it’s a bespoke collaboration unique to the LFA. Lexus and ’box-builder Aisin decided against a double-clutch transmission or even a torque-converter one, because they wanted the definite, mechanical feel that comes from a conventional gearbox. The LFA uses a sequential paddle-shift – no big-name supercar maker could keep face without one, it seems – but inside the rear-mounted transaxle’s casing is a conventional two-shaft six-speeder.

Upshifts are triggered by a light pull on the right-hand paddle. Downshifts via the left paddle need a firmer tug, the idea being to reinforce that ‘mechanical’ interface even though it’s still just a switch. Shift modes are automatic, normal, sport and wet; within these, shift speeds can be selected in seven stages between 0.2 and a yawning 1.0 seconds. On the track, even the fastest isn’t so fast as to be violent. Some might crave yet faster meshing of gearwheels but I reckon it’s fine as it is. And the downshifts are a perfectly-blipped delight. 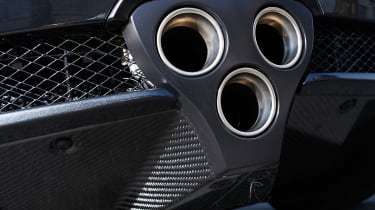 After a few laps, you and the LFA feel invincible. It sounds magnificent, the instruments could hardly be clearer with a centre-stage gear indicator and digital speedo, and you could surely throttle-steer your way to eternity (or an empty petrol tank). This notion gets a further boost as I take my place next to ace test driver Hiromu Naruse for a quick couple of laps of the Nordschleife. On this industry test session populated with various heavy-hitters from big-name Europeans, there is nothing we don’t overtake, no corner left undrifted. I am lost in admiration for Mr Naruse’s skills, and say so. ‘Thank you very much,’ he says in his self-effacing, Japanese way. Naruse-san is 67. There is hope for us all.

The engine is light, dry-sumped and therefore low. It has a separate throttle-valve for each cylinder, a 72deg vee-angle and no more mass than a typical V6. The 40 valves and the connecting rods are titanium, and the lubrication system is designed to cope with 2G forces, longitudinal or lateral. The clutch is ultra-light to help gearshift speed; the gears are diamond-polished to reduce whine. 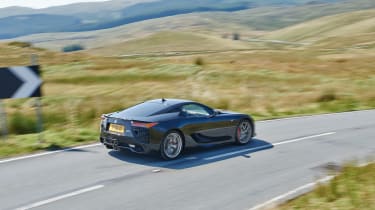 As already seen in cars as diverse as an Aston DB9 and a Mazda MX-5, the engine and the rear axle are joined by a solid torque tube. Here, because the engine sits so low, there’s a spur-gear drive from the clutch to the higher-mounted propeller shaft within the tube. Haruhiko Tanahashi favoured a slight rearward weight bias (52 per cent) so the LFA uses a transaxle rather than a front-mounted gearbox. The double-wishbone suspension arms are forged but hollow aluminium; the dampers have remote reservoirs for extra oil capacity.

And the bodyshell? It’s made by three different methods: hand-laid carbonfibre weave and resin for the cabin section, resin transfer moulding (a sort of vacuum injection moulding) for the floor, the roof and the bonnet, and sheet moulding compound (pre-formed sheets pressed into shape and cured) for the rear pillars and rear floor.

This is where the LFA’s behind-the-scenes purpose, the one beyond broadening the Lexus brandscape in Audi, BMW and Mercedes fashion, becomes clear. Cars have to become lighter if their makers are to reach CO2 targets, and carbonfibre is a good way to do it. But it will need to be mass-produced. Building 500 LFAs is Toyota’s way of learning what it must do to build a future Yaris, Auris or Avensis. 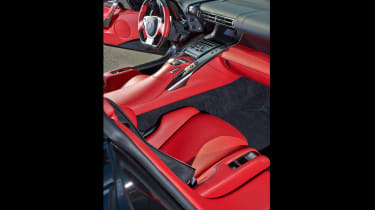 It’s good, then, that the LFA celebrates its carbonfibreness with a style that could never be replicated in sheet metal. The edges, the ridges, the returns are shapes that metal could never do economically; look at the intakes next to the rear side windows for proof. It’s more an assertive car than a beautiful one, but it has some neat detailing such as the triple tailpipes and the rear grilles that, along with the diffuser and moveable rear wing, terminate the airflow.

In a brief foray onto the road, I discover that the engine note hardens from 3000rpm and that there’s enough torque to go pretty quickly even without entering the 5000rpm-upwards fireworks zone. The brakes have too much initial bite, while the transmission surges and the clutch slips too much, especially in automatic mode. Sport manual is best, even when ambling, because it’s easier to modulate throttle against shift speed. The ride is firm but all-of-a-piece; rattles are non-existent. Gearbox apart, the LFA works just fine.

But I haven’t told you the price yet. Deep breath. It’s £340,000, and even at this price it won’t turn a profit. The LFA is a great machine, and driving it has been worth the protracted wait. But is it six times better than a Nissan GT-R, made of similarly bespoke parts? That’s the difficult part.