Thumbs up for the Mazda RX-8's suicide doors. Can't think why they're not more common 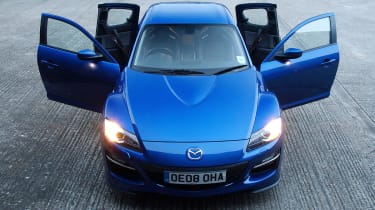 Neat party trick, the RX-8’s rear suicide doors. Remember the fuss made about them when the car was launched in 2003? Semi-hidden in the design, they made access to the rear of Mazda’s coupe easier while still allowing it to have sleek lines.

Impressively, the RX-8’s structure doesn’t appear to suffer for not having permanent B-pillars, and, sure enough, those half-size doors do make getting into the rear a doddle. Accordingly, OE08 has been used several times for four-up lunchtime runs to the local sandwich shop, and so far only Henry has complained, but then he really is far taller than he needs to be.

It’s not entirely a win-win set-up, though. The front doors require an extra hard slam to close properly (I’ve lost count of the number of times I’ve said ‘Your door’s not shut’ to front-seat passengers) and if you pull in alongside another car in a car park and there’s not enough space to open both doors on that side fully, the rear-seat passenger will climb out to find they’re trapped on a tiny triangle of tarmac with a door on either side.

It’s not a perfect arrangement, then, but it is still a very effective one. Makes me wonder why, to date, only the Mini Clubman has copied it.