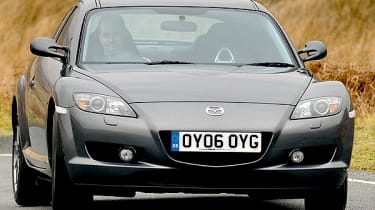 It's easy to see why Mazda has sold over 17,000 RX-8s in the UK. First there's the engine that still seems like a slightly alien propulsion concept to most people, peaks at nearly 10,000rpm and has a name that makes schoolboys smirk (although I've never understood what's so funny about the word rotary). Then there's the fact that the RX-8 still looks fantastic and has the ultimate 'surprise and delight' in its chunky little suicide doors. That they open onto rear seats that can actually be used by adults rather than just providing somewhere to jettison shopping is even more of a novelty. In fact the RX-8 is still such an intriguing car that it's hard to believe that it's been around for nearly three years. But it has and consequently it's high time for a good old Mazda special edition, which is where the PZ comes in. The P stands for Prodrive, who developed the car, and the Z has been lifted from OZ Racing, the company responsible for the lovely new spidery alloys. The whole car went from discussion to build in just 12 months. There was never any intention to start fiddling under the arrowhead bonnet; instead Prodrive was asked to concentrate on making a car that was more focused in the handling department and the main challenge was to make the driver feel more confident when pressing on. The standard car has a tendency to lean quite markedly on an outside wheel as though it's collapsing into a corner when you push it hard. It's a strange sensation, one which makes the car feel as though it's about to slide when in reality there's still plenty of grip to come, and Prodrive realised that this was unnerving some drivers and holding them back. To eliminate this peculiarity, Bilstein dampers and Eibach springs were fitted all round and the front bump-stops changed. The ride height was also lowered by 15mm, with the aesthetic bonus of lending the PZ a much more aggressive stance. The result is a car that's much more direct and planted. The wallow has been replaced by a much flatter cornering attitude, the ride is firmer but not crashy or uncomfortable and the whole thing feels very well sorted. The stiffer front end has made the first dart into a corner more direct and also given a little more weight and feel to the steering, which inspires more confidence on both road and track. An added dividend is that despite the brakes being unchanged from the excellent standard items they now allow even greater precision thanks to the car pitching forward less when you lean on them. Downsides? The RX-8 has always felt a bit like a front-driver because the rear tyres are so utterly planted that neutral to slight understeer is the prevailing balance but the changes allow you to discover this earlier and more of the time. A new exhaust on the PZ adds a frisson of extra bite to the scream of the Wankel above 7000rpm but it doesn't add more punch, which is what you will really crave by the end of your first trackday in the PZ. You can't fault Prodrive for fulfilling its brief and you certainly can't argue with Mazda over the relatively lowly £1400 premium for the PZ, but it would be nice if they could now keep going and have a rummage around with light-pressure turbos or something. The RX-8 continues to be such an intriguing car that I'm sure people would pay for it.