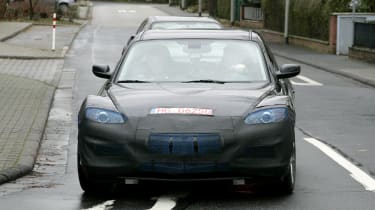 Five years after its official introduction in December 2002 we have now the first spy-shots of the mid-life facelift of Mazda’s RX-8 4-door 2+2-seater sports-coupé. We expect the car to make its official debut at the 2008 Los Angeles motor show.

Judging from the massive cladding around the car’s nose, we reckon the whole front fascia will be re-designed – and the taillights appear to be new as well. While we believe the interior will be updated, too, we don’t expect the two rotary engines to be replaced by newer ones, so the current 192- and 231-bhp units will have to do for the second half of the car’s life.