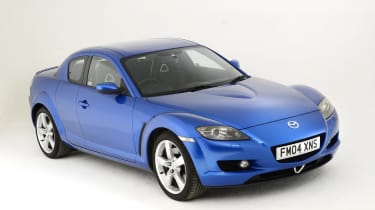 Mazda has a long history of breaking with convention, but few did so with as much conviction as the Mazda RX-8, and it’s arguably even more fascinating now than it was at launch in 2003.

Proper rear-wheel drive, naturally-aspirated, manual-gearbox sports cars are few and far between as it is these days, even if you completely ignore unique aspects like the RX-8’s Wankel rotary engine and its coupe-esque, suicide-doored body style. At launch it went toe-to-toe with cars like the Honda S2000 and Nissan 350Z, while we also pitched it against other mechanically quirky rivals like the Subaru Impreza WRX and Volkswagen Golf R32.

Today the RX-8 is spectacularly affordable, and while the risks of buying used examples are greater than with many of its contemporary rivals, the rewards are high too. If you can stomach the fuel bills - don’t expect a great deal more than 20mpg in any sort of use - the RX-8 offers a unique and entertaining driving experience. 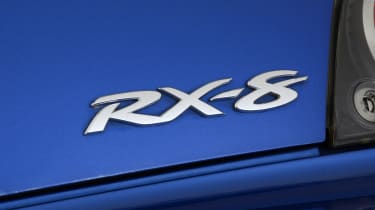 Central to the RX-8 - and implied by Mazda’s RX designation - is its rotary engine. Dubbed the Renesis, it was a heavily evolved version of the two-rotor 13B used in the RX-7, featuring exhaust ports in the side of each rotor housing rather than on its periphery, and new rotor seals - a longstanding weak point of the rotary design.

Unlike the RX-7 (which had ceased production in Japan in 2002, but had long since disappeared from sale in Europe) the Renesis was naturally-aspirated rather than turbocharged, but still capable of producing 237bhp at a free-spinning 8500rpm. A lower-output 189bhp version was also available. The former was attached to a six-speed manual gearbox, while the latter got a five-speed with different ratios.

Underpinnings were closely related to the third-generation Mazda MX-5 - indeed, engineers used MX-5 prototypes to develop the drivetrain. Suspension is double-wishbone up front and multi-link at the rear, and Mazda managed to keep weight relatively low, with a 1300kg figure - the more conventional and less powerful contemporary 1.8-litre Mazda 6 was 1345kg. 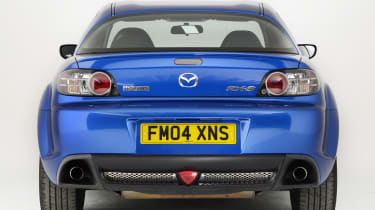 The standard car was priced at £21,995, which seems like a bargain today, particularly given the sleek coupe bodystyle - which actually hit a four-door, four-seat layout, the rear row accessed via rear-hinged half-doors usable only after the front pair were open. The interior couldn’t quite match some German alternatives for quality but a low-slung driving position and uniquely-styled dashboard made the RX-8 feel special inside - and by coupe standards it was practical too.

Several special editions came and went during the RX-8’s production run, but most interesting to us was the PZ. Developed by Prodrive (which, aside from its rallying and racing success, also later worked wonders on the Alfa Romeo Brera), changes focused on improving the car’s handling further. Power therefore remained the same, but OZ-racing wheels, Bilstein dampers with Eibach springs, and a fruitier exhaust all made for a more serious sports car. £25,995 secured one on its launch in 2006.

2008 brought about more significant changes, with a facelift to better reflect Mazda’s corporate look of the time, a higher specification, revised geometry and chassis stiffening, and a shorter final drive. The RX-8 lasted until 2010 in the UK, when it was withdrawn from sale based on emissions standards. 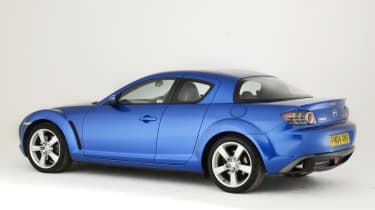 ‘The instruments lie dormant until you twist the key and bring them to life; centre stage is the rev counter with the red paint starting the far side of 9000rpm. No other production car revs this high; it’s just a shame the engine sounds so limp-wristed at idle. You need that rev counter too, otherwise you’re tempted to change up too early, your brain telling you that 7500rpm really should be enough! In fact there’s no harshness from the twin-rotor engine, only an annoying bleeper that sounds as you approach the limiter.

‘The next thing you notice is how keen the RX-8 is to change direction. The steering’s an utter delight thanks to the lack of weight up front… the chassis balance is as near perfect as you’ll ever experience, thanks to the 50:50 weight distribution together with a super-low centre of gravity. With a comparatively weighty V6 under the bonnet instead of the lightweight Wankel, this equilibrium simply wouldn’t be possible.’

‘The result [of Prodrive’s changes] is a car that’s much more direct and planted. The wallow has been replaced by a much flatter cornering attitude, the ride is firmer but not crashy or uncomfortable and the whole thing feels very well sorted. The stiffer front end has made the first dart into a corner more direct and also given a little more weight and feel to the steering, which inspires more confidence on both road and track.

‘A new exhaust on the PZ adds a frisson of extra bite to the scream of the Wankel above 7000rpm but it doesn’t add more punch, which is what you will really crave by the end of your first trackday in the PZ.’ 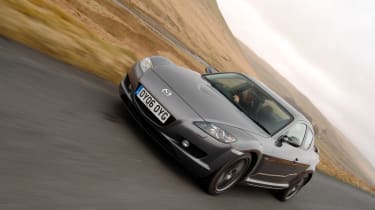