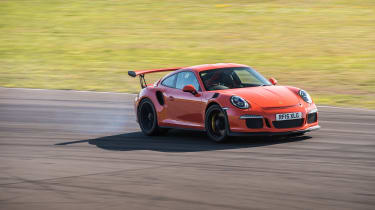 There’s an element of Porsche 918 Spyder to the interior of the latest GT3 RS. It starts with the fixed-back bucket seats – long a GT3 RS feature. Their design and shape is very similar to that of the 918, but they’re effective as well as beautiful.

It continues with the 360mm, three-spoke steering wheel, a little smaller than that of other 911s. It’s refreshingly unadorned with buttons, hides a pair of metal paddles to operate the standard PDK transmission, and is swathed in tactile Alcantara – with a brief flash of yellow at its zenith acting as a position marker. 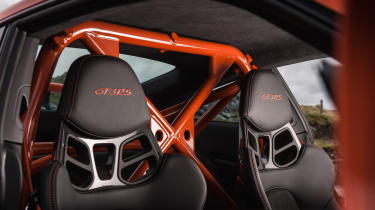 Little familiar details are still there, like the fabric door-pulls and bigger details like the half cage behind the seats. Yet in spite of this it still feels remarkably civilised. Things that used to be no-cost options, such as air conditioning and a radio, now come as standard.

They can of course be deleted, but the change in emphasis from the stripped-out standard is interesting and is perhaps a result of the number of miles that Porsche has found a lot of 991 GT3 owners are covering. In some specs, could this possibly be the first everyday RS?

Despite the plastic rear screen and aggressive spec, the RS feels like a very habitable place, with a beautifully trimmed cabin and there is a much less Spartan feeling when compared to previous generation RSs or indeed a 458 Speciale.

The other big factor in the increased usability of GT3s is the PDK gearbox. While it might have been fitted in the pursuit of faster lap times around the ‘Ring, there is no denying that it also makes life much easier in traffic on the ring road.