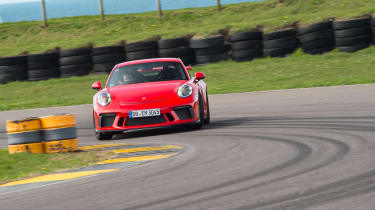 Porsche’s ultra high-performance road car division hasn’t built a duff one yet. As the latest in a long line of spectacular cars, the new 911 GT3 carries on its shoulders a weight of expectation that most would find debilitating.

Rather than being an all-new model it’s a heavily reworked version of the previous GT3, also based on the current 991-generation 911. Porsche’s Motorsport division has reengineered the normally-aspirated flat-six engine, the chassis and the aerodynamics, and for the first time the car is available with a choice of transmissions.

That means the return of the manual 911 GT3 – the previous version was PDK only. Porsche Motorsport boss Andreas Preuninger reckons this GT3 is the best one yet.

Whereas the previous GT3 used a 3.8-litre engine, this one gets a 4-litre. It’s not simply the same engine that powers the GT3 RS and 911 R, however, but a comprehensively upgraded version of it. Measures such as a rigid valvetrain, redesigned crankshaft and new cylinder bore liners help to reduce internal friction, while the redline is now set at 9000rpm – matching the smaller 3.8 but improving on earlier 4-litre versions.

Power from the dry-sumped unit is rated at 493bhp – although that’s said to be very conservative – with peak torque of 339lb ft arriving at 6000rpm. Buyers can choose between a seven-speed PDK transmission and a six-speed manual gearbox, the latter being the same item that was developed for the 911 R. 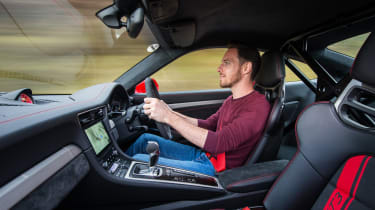 Power goes to the rear wheels via a limited-slip differential, which is electronically controlled when mated to the PDK gearbox for faster responses, but purely mechanical if the manual transmission is specified.

Porsche quotes a 0-62mph time of 3.4 seconds and 197mph flat out for the PDK version, and 3.9 seconds and 198mph for the manual. Porsche also recently took the new GT3 around the Nurburgring and completed a time of 7 minutes 12.7 seconds, putting it 12.3 seconds ahead of its predecessor.

Porsche’s engineers have retuned the dampers and revised the electrically-assisted steering to improve feel and precision. The rear axle now uses helper springs to bring more pliancy and composure – and ultimately better traction – to the rear end. Adaptive dampers are standard fit, while certain chassis settings – anti-roll bar stiffness, toe and camber – can be adjusted for circuit use.

The aerodynamic package, meanwhile, has been tweaked to deliver 20 per cent more downforce than before with no increase in drag. The maximum downforce figure is now 155kg at top speed, matching the track-focused 997-generation GT3 RS. 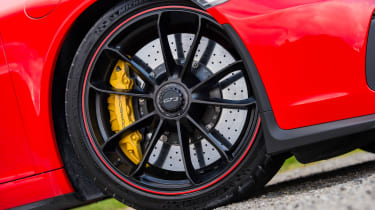 The latest version of Michelin’s super sticky 20-inch Pilot Sport Cup 2 tyre is standard fit in most territories, including the UK, although some markets will use Dunlop rubber. Porsche quotes a kerb weight of 1340kg.

It should come as no surprise to read the new 911 GT3 is sensationally good to drive. The steering is precise, well-weighted and feelsome, making it one of the very best electrically-assisted setups on any car, anywhere. It does lack some of the tactile patter of the hydraulic systems fitted to older GT3s, but, crucially, it gives you a clear impression of how hard the front tyres are being worked and it allows you to place the car on the road with millimetric precision.

The smaller 360mm steering wheel is a big improvement on the larger item in the previous car, too, while the optional bucket seats are brilliantly supportive and comfortable even over longer journeys. 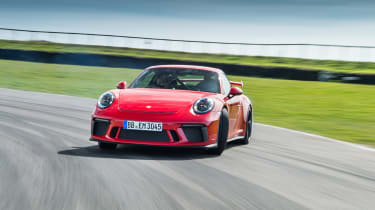 The chassis, meanwhile, is simply sublime. The quality of the damping is such that the car is both tightly tied down to the road surface and composed over bumps, potholes and ridges, meaning the tyres stay firmly pressed into the tarmac at all times. Those Cup 2 tyres, incidentally, find enormous grip on a dry road.

With helper springs at the rear axle the car now finds so much grip and traction that it seems to be all but impossible to unstick the rear tyres coming out of a bend. Even in the lower gears the two fat tyres simply dig in and fire the car down the road.

Whereas certain sports cars can be technically very capable on the road but somehow quite distant and uninvolving, the new 911 GT3 is both spectacularly competent and enormously rewarding to drive.

Much of that can be attributed to a quite brilliant engine, which pulls hard and insistently from low down before lighting up in the mid-range and exploding across the final 2000rpm. The GT3 now feels so fast in a straight line that it seems absurd to expect any more performance from a road car. The engine is raw and thrilling with a serrated, hard-edged soundtrack. This is undoubtedly the best 4-litre version of the current engine architecture. 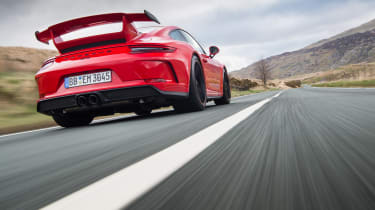 The PDK gearbox is now faster than ever, responding to tweaks of either steering-wheel mounted paddle almost instantaneously. Although we haven’t yet driven a manual version we can be confident it’ll be very good indeed, given it’s the same excellent unit that’s found in the 911 R.

Predictably enough, the GT3 is superb on track, too. It finds massive grip both on turn in and mid-corner and the body is kept in tight control, although the transition to oversteer can be very sudden at times. Perhaps that can be improved with some tweaks to the chassis settings. The carbon ceramic brakes, meanwhile, feel as though they would last all day without fading.

At £111,802 the 911 GT3 has a level of performance and dynamic ability that most supercars costing significantly more money would kill for. The £138,350 Audi R8 V10+, for instance, has more power with 602bhp, but despite its excellent chassis it doesn’t have the same rare dynamic quality as the GT3 and on track it wouldn’t see which way the Porsche had gone.

In fact, the only car even vaguely in the same price bracket that delivers a similarly beguiling driving experience is the £159,750 McLaren 570S Track Pack.