The sports car you can use every day without questioning your sanity. Here’s what to look for 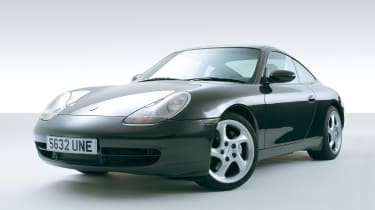 You can safely say that the evo crew are big fans of the 911. Reading through past evo Car of the Year competitions it soon becomes apparent why. The 996 Carrera 2 won the inaugural crown in 1998 with its ability to be ‘approachable and accessible like a sports car, but still with the ability to inspire awe like a supercar’. Which sums it up pretty neatly really. On paper it may have its heart in the wrong place, but on the road its purity of purpose, poise, finesse and honed athleticism allowed it to dominate a test that included the Ferrari F355 and the Elise 135.

A year later Porsche retained the crown, the GT3 smashing the hopes of twelve impressive contenders, and the 420bhp Turbo made it a hat-trick at the end of the millennium year. The 996 was in danger of making our biggest test of the year a forgone conclusion.

So they’re good then. The best from the period in fact. And get this: you can pick up a very tidy example for less than £25,000. Early Carrera 2s with around 60,000 miles on the clock have now dropped into this price bracket. Buy wisely and reliability will be strong, running costs manageable, and depreciation virtually zero.

The C2 is just the starting point though. The complete 996 range requires further investigation as it includes the equally brilliant C4, the superb C4S, the potent Turbo and the electrifying GT3 – not to mention the convertibles, the Targa, the Turbo S and the mad, bad GT2. Right now all represent good value for money, making the 996 one of the most desirable second-hand buys around.

EvolutionThe 996 arrived in the autumn of 1997, costing £55,950. It was an impressive move forward from the 993, building on everything that had always been great about the 911. It was also the first water-cooled 911, meaning that the flat-six could use four valves per cylinder, power rising to 300bhp from the 3387cc unit.

The 996 was the first truly modern 911 – drive a 993 today and, by comparison, it will feel great but old, almost like a classic with its archaic switchgear and awkward ergonomics. The new car was more practical too, and while we don’t necessarily get excited by the fact that more bags could be squashed into the nose, the cabin was usefully roomier. The car’s structure was also 45 per cent stiffer, yet despite all of this the 996 was 50kg lighter than the outgoing model. It was no surprise when sales took off rapidly, helped further by the introduction of the cabriolet in July ’98.

In 1999 a side impact protection system was added, along with a new exhaust system. Cars so-equipped can be identified by their clear indicator lenses. The same year also saw the arrival of the Carrera 4 (fitted with Porsche’s PSM stability control system) and the GT3. On first acquaintance it can be hard to detect much of a difference between the C4 and the C2 as only five per cent of the drive is transferred to the front in normal driving conditions. However, up to 40 per cent can be transferred depending on a number of variables including rear wheel slip, and when pushing on you notice the nose doesn’t bob quite as much.

The 1999 eCoty winner was something special. The GT3 stripped the Carrera of all distractions, dropped the suspension by 30mm and upped power to 360bhp. Lighter, forged pistons, titanium con-rods and a 2mm longer stroke increased the swept volume to 3600cc. Unsurprisingly, the GT3 is one of the slowest depreciators of the lot and you’ll need at least £42,000 to get into one. It’s most definitely worth it though.

In 2000, PSM became available as an option on the C2 and further upgrades included a new engine management system and a drive-by-wire throttle (E-gas). The big news, however, was the introduction of the Turbo model. It may not have been quite as intimate as the C2, but it was a high-speed tour de force, able to rocket down any B-road you threw at it.

The big hitter, the GT2, landed in February 2001. Weighing 110kg less than the Turbo, it featured a 462bhp turbo engine, ceramic brakes, rock solid suspension and no PSM. And if the £110,000 price tag was a little steep, the wide-body C4S that arrived in September 2001 may have been the answer. For a £2610 premium over the C4, it was fitted with the Turbo body, wider track, larger wheels and tyres, a lowered chassis, bigger brakes and sports seats. It was brilliant, incisive, dynamic and keyed to the road. Unsurprisingly it was an instant hit and residuals for the C4S are still very strong. Since 2001 a C4S will have lost £16,000 from new; a GT2 owner, however, would have seen over £50,000 disappear.

The most significant model upgrade arrived with the 2002 facelift, where headlight and bumper changes mark a number of under-the-skin revisions including a 316bhp 3.6-litre engine with Variocam Plus. Aerodynamics were subtly improved along with crash protection and rigidity, while inside there was a new steering wheel and a revised dash. The GT3 received an upgrade the following year and the extra 21bhp powered it to 190mph.

Finally, in 2004 a whole raft of new 996 flavours were let loose, including soft-top versions of the Turbo and the C4S. The Turbo S with 450bhp and standard ceramic brakes arrived to sit alongside a revised

GT2 (with a power hike to 483bhp) and a 40th anniversary special edition C2. But for us the most significant of all was the GT3 RS, with further weight reductions, revised suspension, a full roll-cage and race seats.

Comparing the 996 with its successor After becoming acclimatised to the 997 over the last year or so, the 996 now looks a little dated, a touch fussy in its appearance and even a tad heavy. It’s amazing how things age once you become accustomed to a new look. Of course, it’s far from ugly or awkward, it just appears that bit older, which is probably one of the reasons why prices have dipped so sharply.

Inside it doesn’t have quite the quality of the newer car either, although it still feels tough enough to last forever. At least it’s not over-burdened with buttons and switches, and the driving position feels slightly better, with the pedals ideally spaced for heel-and-toe downshifts. Make no mistake, it’s still an excellent place to be.

On the move the 996 provides a slightly rawer driving experience than the 997. The engine feels superb – powerful in the mid-range, rising to a spine-tingling climax at maximum revs.

Over the past 42 years every 911 incarnation has become smoother and more rounded, with the sensation of a heavy tail and light nose reducing each time. Moving back a model requires the driver to focus more on the messages the car sends. You have to settle the nose before unleashing the power. We are only talking degrees here, but you need to work that bit harder to extract the best from the 996. Some will say that this makes it the more involving car to drive. You learn something new about it on every journey, and by working with it you evolve new, subtle techniques for gaining the most from it.

It rides extremely well, displaying the kind of suppleness only a structurally stiff chassis can provide, soaking up the worst that UK roads can throw at it and never being knocked off its stride. Grip levels are impressively high too, and with all that weight on the rear tyres traction never becomes an issue. Cross country it would still be right there with the 997. Not bad for a car that costs half as much.