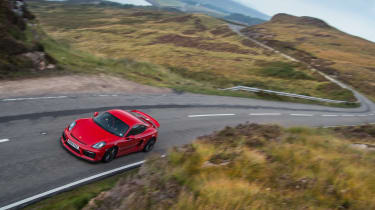 Economy probably won’t be at the forefront of GT4 drivers’ minds, but like other Caymans it’s capable of surprisingly frugal figures when not exploring its performance.

Officially, that figure is 27.4mpg, or 4mpg shy of the slightly more sedate and 400cc smaller Cayman GTS. The equivalent CO2 figure is 238g/km, which puts the GT4 into band L for VED, with a £490 bill in its first year and £490 thereafter. Not cheap, but not excessive for the fun you’ll be having.