Best Japanese cars - the greatest performance cars from Japan, past and present

Japan has given us a formidable output of performance cars over the years but which are the best Japanese cars ever? 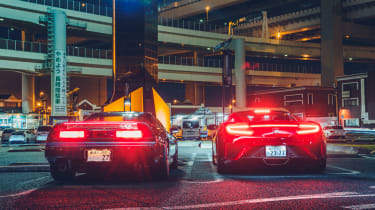 For people of a certain age Japanese performance cars are every bit as exciting as their counterparts from countries like the UK, Germany, Italy or United States. A generation of prominence in video games, coinciding with a purple patch in Japanese car manufacturing and the easy passage of information on the internet meant that Japan went from being a nation that produced reliable but relatively unexciting vehicles into one making some of the planet’s most desirable performance cars.

That’s still the case today, even if the market has changed somewhat since the Japanese car boom of the 1990s. Some familiar nameplates are no longer around, but others are still going strong, and Japan offers everything from class-leading hot hatchbacks to lightweight sports cars and striking supercars. With a new Toyota Supra on the horizon, a rotary revival from Mazda and rumoured returns for cars like the Honda S2000, the Japanese manufacturers look set to continue the excitement into the future too.

> Click here for our review of the all-new Toyota Supra

We’ve selected a handful of Japan’s best ever efforts, 5 old and 5 new below, illustrating the breadth of talent available from the country’s carmakers – and why you don’t need to have grown up with Gran Turismo to appreciate them.

The five best Japanese performance cars that you can buy new today are listed below.

The NSX’s enormous gestation and subsequent over-saturation at motor shows had some of us wondering whether it would be worth the wait. Thankfully it was, pairing remarkable performance and capability with an easy-going aptitude for daily driving – not unlike the original NSX, in fact. It remains mid-engined and powered by a V6 too, though a quarter-century of technological improvements mean it’s otherwise quite different in concept.

The 3.5-litre engine is matched with a trio of electric motors, two of which power the front wheels for a torque-vectoring all-wheel drive setup, and it has the ability to run on electric power alone for short distances. Slightly aloof for some, the NSX is otherwise hugely capable, and looks much more dramatic in the metal than it does in pictures.

> Click here for our full review of the Honda NSX 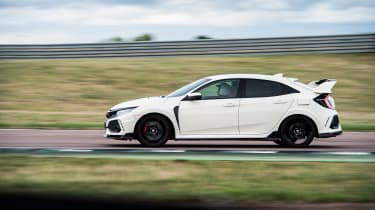 Like the NSX, the latest FK8 Civic Type-R is a spectacular technological achievement. It’s capabilities on road and track are significantly beyond any of its rivals and several proper sports cars besides, dismissing bumpy country roads with disdain and feeling like a touring car on track.

Longer, wider and lower than the car it replaces, it also rides better and sits the driver in a position more becoming of a performance car. Its drivetrain is much the same, but with a better chassis underneath you, it now feels like you can use more of its potential. For some, that huge potential comes at the expense of involvement, but if the Civic has one problem to overcome above all others it’s the love-it-or-hate-it styling.

> Click here for our full review of the Civic Type-R

In a world otherwise full of crossovers, turbocharged engines and automatic gearboxes, the Toyota GT 86 and Subaru BRZ duo with their naturally-aspirated engines, rear-wheel drive and snappy manual gearshifts are a breath of fresh air. That both are also great fun to drive, albeit not fault-free, is even better news.

Developed as a joint project between Subaru and Toyota, the BRZ and GT 86 use a 2-litre flat-four engine with 197bhp and weigh-in around the 1230kg range. That engine is either the car’s weakest aspect or completely the point, depending on your point-of-view - it really needs revs to deliver its best. Same goes for the eco-biased tyres, which undoubtedly allow the car to move around but don’t give you much confidence at higher speeds. Even so, both are great fun and it’s a rare pleasure that they exist at all.

> Click here for our full review of the Toyota GT86

Recently granted a power increase in 2-litre form, the MX-5 is nevertheless a perfect illustration of the fact that you don’t need much performance to have big fun. By sticking to the same recipe as it has since the original debuted in 1989 – light weight, a compact footprint, a removable roof and a simple, naturally-aspirated engine – the MX-5 remains as compelling as it was then, and has similarly few real rivals.

Like Toyota and Subaru’s efforts the MX-5 isn’t perfect. The body movement that makes the car fun at low speeds makes it wayward at higher ones, the engines are relatively uninspiring, and for taller drivers the cockpit is cramped. But with the roof down (in either roadster or Retractable Fastback form) on a sunny day, few cars make their fun so easy to access.

> Click here for our review of the new Mazda MX-5

It’s a decade old now but the R35-generation Nissan GT-R has lost none of its impact. The imposing styling still turns heads and the performance of its high-tech all-wheel drive system, dual-clutch transmission and 3.8-litre twin-turbocharged V6 still has the power to surprise on both road and track. It’s needed just the smallest of updates over the years to keep rivals honest.

Perhaps the greatest myth hanging over the GT-R is that the driving experience is as digital and emotionless as its pixellated counterparts in Gran Turismo. That couldn’t be further from the truth – this is a car that delivers feedback to your fingertips and whose drivetrain churns, whooshes and howls like a blue-blooded sports car’s. Its eventual replacement will have to be special indeed.

We’ve delved in to Japan’s back catalogue for the 5 best Japanese cars from years gone buy.

The modern R35 GT-R’s performance has somewhat taken the wind out of the R34’s sails, but one look at the values of R34 Skyline GT-Rs shows how highly they’re still regarded. A darling of the “PlayStation generation”, the Skyline’s giant-killing reputation and tunability mean it’s more sought after today than ever before.

What’s great is the R34 is still fantastic to drive, even in a modern context. Okay, in standard form their performance alone isn’t that remarkable – most current hot hatchbacks deliver a greater whack to the kidneys – but the howling inline-six engine, slick manual gearbox, torque-shuffling all-wheel drive system and relatively compact size make it an easy car to exploit. It can’t just be us who think it looks even better today than it did two decades ago, either...

If you think rear-wheel drive is a prerequisite for building a true driver’s car, you need to spend some time behind the wheel of the DC2-generation Honda Integra Type-R. It isn’t just one of the best front-wheel drive cars ever made, but one of the cars evo rates most highly irrespective of performance or price bracket – and age has not diminished its abilities.

The Integra is one of those rare cars that rises to meet every demand you make of it. What starts off feeling much like any other 1990s Honda – easy to drive, quiet engine, comfortably squashy seats – pulls into sharper focus the harder you drive. The engine is one of the great four-cylinders, the composure on tricky roads astounding, and the feedback constant.

It’s often the case that performance cars from earlier eras can feel a little soft next to their modern counterparts. One that doesn’t fall down in this area is the Mitsubishi Lancer Evolution VI, and particularly so in limited-run Tommi Makinen Edition form. After just one drive down a twisting stretch of road, you’ll realise why it’s held in such high regard.

Actually, it does feel softer than some modern equivalents, but not in a way that detracts from the experience. What was once considered quite a hardcore, edgy chassis now feels pliant and fluid compared to say, a Ford Focus RS. This makes it a pleasure to thread along a road, with great visibility and plenty of performance thrown into the bargain. Plus, it’s got real competition pedigree – not something many modern cars of the same performance can claim.

Impreza or Evo? Unfortunately, it’s not a question raised often these days, with the Impreza simply serving as Subaru’s unremarkable family car and the Evo nonexistent in Mitsubishi’s range. Back in evo’s early days it was a regular conundrum though – and one that the RB5 answered emphatically in 1999.

We never actually compared the RB5 directly with any Evo, but it’s among our favourite Imprezas, involving and rewarding in equal measure and making the “bug-eye” GD Impreza that followed a year later seem slightly less special. In the end, the RB5 was accomplished enough to finish third in eCoty 1999, behind only the Porsche 996 GT3 and Ferrari 360 Modena and ahead of the E39 BMW M5, Peugeot 306 Rallye and R34 Skyline GT-R.

Launched in 1992, Type-R changes led to the removal of the spare tyre, air conditioning and traction control, the installation of a pair of carbon-kevlar Recaro seats, and Enkei five-spoke alloy wheels, all designed to save weight. Chassis changes, a shorter final drive ratio and blueprinted drivetrain made it sharper to drive too. The second-gen Type-R, launched in 2002, was able to match the Ferrari 360 Challenge Stradale’s lap time around the Nordschleife, despite a large power deficit.

From the first to the very latest, we take a dive into the history of the supersaloon with the 1985 BMW M5 E28 and other classics taking on today's mo…
Visit/caterham/7/202453/caterham-super-seven-1600-review

Latest Seven is as entertaining as ever, but you’ll pay handsomely for the retro charm
Visit/hyundai/201819/hyundai-i30-fastback-n-versus-the-nurburgring