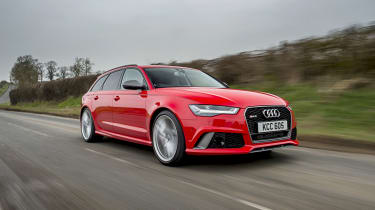 It may not be our favourite fast estate car, that accolade goes to the Mercedes-AMG E63, but Audi’s RS6 Avant has an appeal that we just can’t ignore. Its quattro all-wheel drive chassis generates huge levels of grip that allows you to exploit every single one of its 552bhp produced by its twin-turbocharged V8 no matter the conditions beneath its 20-inch Pirelli shod alloy wheels.

Jump in the new RS6 Performance and the intensity of the delivery across the board increases to deliver a more rounded and intoxicating experience, with a more potent 592bhp version of the same 4-litre V8 engine under the bonnet.

Neither version of the C7 RS6 are particularly involving drives, however. The front end can feel pretty leaden when you start to push its chassis, and the steering lacks that clear feedback you’d like to have when trying to thread a 1935kg estate car along an enticing stretch of road. But it always feels hunkered down and keyed into the surface, the whole package a tight, cohesive one. When you absolutely have to get somewhere and speed and security is the crucial factor, there are very few rivals that come close to the RS6. And why on earth you would consider a turbo or supercharged SUV over one of these, we've no idea. 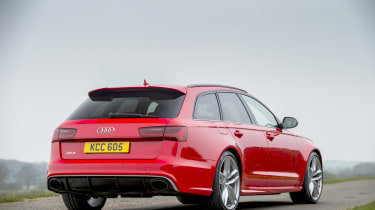