To mark 20 years of the magazine, we ask Columnist Richard Porter to recall his most memorable evo moments 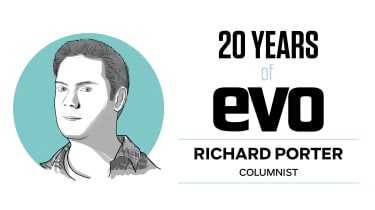 I started at evo helping out with sub-editing during press week, so my first memory isn’t thrashing supercars across open moorland. It’s late nights in the old office, John Barker having a crafty rollie out of the window, Dickie Meaden making excuses for why he hadn’t done his Ed Speak words, Harry Metcalfe padding around asking for news stories to fill up a gap in the front section, Peter Tomalin quietly corralling the whole thing from the corner with overseas cricket commentary waffling from the little radio on his desk. My earliest, and possibly my fondest, memory.

Some kind of sporty Astra. An SRi, maybe? I can’t remember now. It was pre-production and the middle of the dash appeared to be painted in undercoat. It wasn’t bad. The chassis and stuff, I mean, not the Dulux trim.

I’ve been on a few Car of the Year tests. They’re usually not too shabby. Loads of nice cars, good locations, couple of drinks with the team in the evening. Not much to complain about there.

Car of the Year in 2014 (evo 203). Jag F-type R, chasing someone in the Ferrari 458 Speciale back to the hotel across the Scottish Borders as the sun went down. Not something you forget in a hurry. That and trying to drive an Elise from Land’s End to John O’Groats in one day without using motorways (evo 068), which is a stupid idea, as it turns out.

Horrible loss of front-end grip and also talent in a 911 at Bedford Autodrome, right in front of the photographer (Cayman v 911, evo 077). Ever since that pic has been used whenever evo wants to illustrate ‘understeer’. Do you want to hear my track driving excuses or are you just going to run the photo again? Thought so.

One day this Toyota Corolla T-Sport turned up at the office. I don’t think anyone had asked for it, but Toyota thought it might make a good addition to the Fast Fleet. It was hopeless. I think it was John Barker who made the delicate phone call to Toyota asking them to come and take it away again.

I’m a big fan of the hirsute stylings of Henry Catchpole. His McLaren to the Atlas mountains story (evo 173) sticks in the mind for starters. I know people on YouTube say he’s just a poor man’s Jon Bentley but I think we should give him a chance.

I was horribly jealous of the Ferrari unicorns story (evo 064) and in particular of the people who got to drive the 288 GTO. But then, you know, maybe you should never meet your heroes.

I know this is an awful evo cliché, but it’s a Porsche. The 997.2 GT3 RS, if you’re interested. Just every bit of power and precision and feedback and howling excitement we look for, all in one lovely tin. Although obviously I was very annoyed that I couldn’t get it to understeer. Ha ha ha!