To mark 20 years of the magazine, we ask Founding Editor John Barker to recall his most memorable evo moments 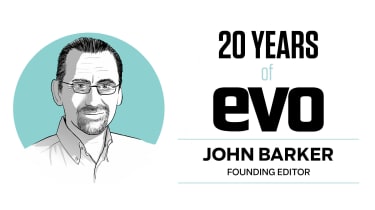 This year evo celebrates its 20th birthday. To mark the occasion, in this new series we ask key members of the team to recall their most memorable evo moments

Harry saying, ‘Oh, no, what am I going to read now?’ when Dickie and I told him that Performance Car magazine was closing. Harry was a farmer then and used to help with driving on group tests. Our answer to him was, ‘Well, we could always launch a magazine…’

What was the first car you drove for evo and what do you remember about the drive?

It was a 996 911 Carerra that Dave Shepherd shot for the dummy issue to show what our road tests would look like. In the copy I pretended it was an RS and it sounded so good I gave it five stars. Prescient, that!

What was the first car launch you attended for evo?

The E39 M5, out of Munich airport. Photographer Gus Gregory took one of my all-time favourite shots – a downhill chase where you could see under the car. The camera was bolted low on the front of his hire car and we rolled down the hill trying to maintain the correct distance for the focus. This was the days of film and we made a number of runs to be sure; you never knew quite what you’d got until the film was processed…

What was the most memorable evo test you were a part of?

So many. ‘The Test’ (issue 022) was an incredible few days, staying at Harry’s villa outside Sarteano, driving supercars (Ferraris 360 and 550, Diablo VT, Zonda C12, 911 Turbo) on the roads of the Val d’Orcia, and then in the evenings hanging out with your mates on a warm patio with a cold beer, cracking jokes and taking the piss under the stars.

And your most memorable drive for an evo story?

It was from that test. I sneaked a longer drive in the Zonda, the car we’d been championing since we first got close and realised how serious Horacio was. While the rest of the team went to set up the cover shot I took the long way round and it was heaven – warm, twisting asphalt, picture perfect scenery and the sweet, sweet Zonda – Loris Bicocchi did the chassis set-up.

What was the most disappointing car you drove at evo and why?

The Honda S2000. I still don’t understand how such a talented company, having nailed the much trickier NSX, could fumble a straightforward roadster.

And your worst evo moment?

Probably Car of the Year 2002. Last day of a very long test, we were at the top of a mountain in Italy and could hear police sirens for about half an hour, which we eventually realised were coming for us. Apparently we’d been reported for holding an illegal rally. The armed police told us we were all going to prison and there was a transporter coming to take away all the cars (for which we had no papers). After two or three tense hours the situation eased and cops were having their pictures taken with the cars, enjoying rides in the Ferrari, and we got off with a nominal 200 euro fine.

Your favourite evo story written by a colleague?

Peter Tomalin’s epic yarns – he did a couple of early Car of the Year tests and set the bar high for the narrative, inclusive style which the rest of us have tried to match. And some of Dickie’s racing adventures have been engrossing.

The one car you wish you had driven during the last 20 years?

Somewhat perversely, the car I missed and I’d like to tick off, is the Mercedes-Benz SLR McLaren, even though colleagues say it’s dynamically dreadful!