To mark 20 years of the magazine, we ask Contributing Editor David Vivian to recall his most memorable evo moments 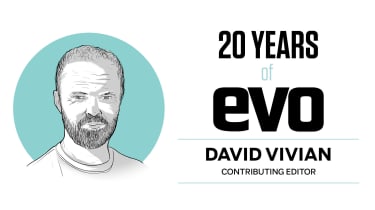 Some months before evo launched, handing Harry Metcalfe the liquidator’s report for Petrolhead, a fast car/lifestyle/lad’s magazine I freelanced for that vanished owing me a chunk of cash. Frankly, I was relieved it went under. After flying a plane and getting drunk with Lemmy, my next commission was to be set afloat with a life jacket in the North Sea and then be rescued by a helicopter.

The first I can remember was Harry’s Lotus Elan Spirit. Fittingly, it was dripping in ‘evoness’, a concept that had yet to fully take shape and form, though when the greatly missed Russell Bulgin nailed it in a small article (see issue 015 or 046), everything retrospectively fell into place. I’m not sure the subtle little rocket’s evoness quotient has ever been bettered.

The Saab 9-3 Viggen (evo 008). Saab’s engineers said it had ‘a little’ torque-steer. Quite an understatement. On an uneven surface it’d torque-steer from one side of the road to the other without the driver turning the wheel. Putting 225bhp through the front wheels alone was clearly a big ask in 1999.

Porsche 918 Spyder v McLaren P1 (issue 200). I relish a memory from day two, rejoining the evo Triangle at the junction that leads to our regular eating spot. Photographer Dean Smith is ahead in the P1. The section of triangle we’re turning onto is clear. Of course, we both give it the lot and what follows is simply beautiful. The P1’s bulbous, blaring rump is bang in the middle of the 918’s windscreen and it doesn’t move. Not an inch. Despite being heavier and having less power, the Porsche is the McLaren’s shadow. Its colossal torque and screaming, stratospheric rev ceiling has the P1’s number. It’s been my favourite car ever since.

Probably because it’s freshest in my memory, driving a Lamborghini Aventador S from the factory in Sant’Agata to my front door in Whitstable (evo 240). It was the closest thing to the epic ‘collect-supercar-at-factory’ adventures penned by the likes of Doug Blain and Mel Nichols that I read as a kid, right down to the very Italian, very laid-back delay before a wheel had turned while the engine was removed, a fuel leak plugged, and put back in.

Sorry to say, the Alfa Romeo 4C. Never has a car that promised so much delivered so little.

It’s a misty autumnal morning in north Wales on eCoty 2000 (issue 027). Harry Metcalfe decides to join me in the impossible-to-miss burnt orange TVR Tuscan. We turn out of a petrol station and, assuming the only reason Harry is sitting next to me is to experience the Tuscan’s famously brutal acceleration, I select second and shove the accelerator pedal deep into the footwell, knowing full well we’ll be on the tail of the Noble M400, driven by Roger Green, in a flash. And we would have been had Rog not followed the glistening, leaf-strewn road round to the left with a healthy degree of circumspection. Harry and I, on the other hand, kiss the apex fully locked up (no ABS) and at the speed of a rocket sled, exploding a hole in a dry stone wall on the far side of the road so violently it rips Harry’s seat from its moorings on one side. Amazingly, we walk away.