To mark 20 years of the magazine, we ask Founding Editor Richard Meaden to recall his most memorable evo moments 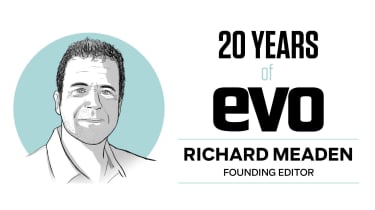 My earliest memory predates evo. I was sitting on a bench on the Great Orme in Llandudno, chatting with Harry Metcalfe during the final Performance Car group test. By this time H had become part of the extended PC family, so I made sure he was with us for the last test. Of course, there may have been an ulterior motive…

I honestly can’t recall, but the first evo-related drive was probably in Harry’s rather tired Golf GTI. I recall using it to ‘liberate’ our old magazine archive from the PC offices before the cleaners slung it in a skip. That venerable Golf also got us to and from the printers – handily based in Cornwall – for the first few issues. It was a true founding member of the team.

Maserati 3200 GT – the cover car of issue 001. It was something of a coup for a start-up magazine to get an invite. I know it put a few of the established titles’ noses out of joint! We owe Ferrari/Maserati’s then PR manager, Tim Watson, an enormous debt of gratitude for putting his faith in us.

It’s hard to select one. Motor racing adventures are right up there: my first time racing in the N24; competing at Pikes Peak; doing 229mph in a Skoda Octavia vRS at Bonneville Speed Week. All unforgettable. However, for me the heart of evo has always been extraordinary drives in fabulous road cars. Of these, retracing the Targa Florio course in a Mk1 996 GT3 for issue 028 is the one I would love to do again.

Any Alfa Romeo introduced before the launch of the Giulia Quadrifoglio.

The lowest but also funniest-in-hindsight moment was one of Harry M’s legendary motivational speeches. We had just completed the third issue – our first eCoty. Spirits were high. Then H told us we were skint, issue 2 hadn’t sold well and we’d be lucky to get to issue 4. He then wished us a Merry Christmas. We can laugh about it now…

My absolute worst evo moments seem to involve undergrowth. And John Barker. There was the time I crashed his Evo VI RS Sprint long-termer into a hedge. Then I put his wedding car – a white Jaguar S-type V6 – into another hedge. On the night before his wedding. Awkward.

Peter Tomalin’s story about Dino Ferrari (evo 106) was truly fantastic. Thoughtful, original and beautifully written. However, I think my favourite was the late Russell Bulgin’s short piece on ‘evoness’ (see issue 015 or 046). Having something with such personal significance explained better than you could explain it yourself – and by my absolute favourite motoring writer – was very special.

I honestly can’t think of one. I’ve been a bit spoilt over the years.

Any number of 911s (including a Singer) commend themselves, as does the Ferrari 458 Speciale. However, I think an S1 Elise Sport 135 is my pick.