The Ferrari 458 Speciale is the latest in a line of super-hardcore mid-engined Ferrari V8s. Review and exclusive video here 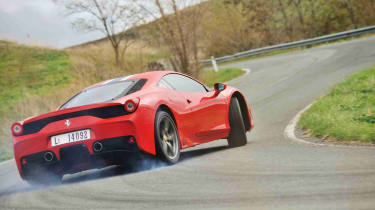 The Ferrari 458 Speciale takes what is already one of the most extreme road cars and turns it up a notch further. In the spirit of the Ferrari 360 Challenge Stradale and 430 Scuderia, the Speciale takes the 458 into new, more hardcore territory. It also gets a central stripe, just like its iconic forebears.

The 4.5-litre V8 produces 597bhp at 9000rpm, its 133bhp-per-litre made possible by a staggering 14:1 compression ratio. This greater output is pushing 90kg less too, thanks to a carbonfibre underbody, thinner glass for windscreen and side windows, a Lexan engine cover, new and lighter ceramic brakes, forged wheels and an interior of delicious minimalism.

There are also magnetic dampers, stiffer springs and anti-roll bars compared the 458 Italia. The gearshift logic is differnt too, and cuts the time it takes the engine speed to match the gear ratio on downshifts by 44 per cent. Then there’s the active aero, which reduces drag as speeds increase, and high silicon content ceramic discs… no wonder Ferrari says this car isn’t a ‘version’ of the 458 Italia, but a whole new car.

Side Slip angle Control (SSC) system allows drivers of all skill levels to explore the depth of the Speciale’s ability with as little electronic intervention as possible, but still with a degree of assistance should they overstep the mark. 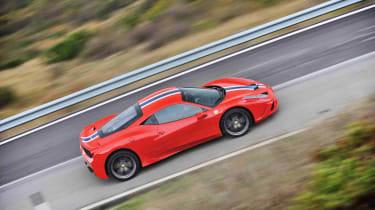 The firm ride has no hint of harshness. It’s wedded beautifully to an accurate steering system,  consistent and responsive brakes and a sweet brutality from the twin-clutch gearbox. The Speciale isn’t just stiffer, faster, louder than a 458 Italia… it’s just beautifully wrought, cohesive and – no question – it feels more serious, more focused and just plain better.

It is noticeably noisier than the Italia, though. It doesn’t howl and shriek quite as manically as a 430 Scuderia, but the engine can drone away if you’re in Race mode or upwards. There’s ever-present road noise that drums up through the bare floors, but in a car of this potential and focus it’s far from a deal-breaker.

Strangely, the gains in simple performance terms don’t feel as great as I’d expected, but no matter. This is still a seriously rapid car. The engine is remarkable, and the way it melds thick, instant torque with that explosive top-end delivery is quite breathtaking.

Braking late into a corner is made slightly more brutal thanks to the fast rev-match on downshifts, each shift bringing a jolt as the gears hit home. It feels like the shifts are completed with no margin at all. If the clutch closed a millisecond sooner the rear wheels would lock. There is no margin, no slack anywhere in this car. 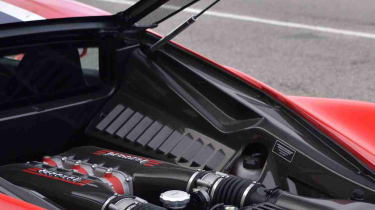 The Speciale wears unique Michelin Pilot Cup 2 tyres - the same basic tyre as we’ve tried on the 911 GT3 and SLS Black Series – and the car simply dances over a seriously testing road that’s slick with moisture and fallen leaves. Grip is astounding and the steering accurately relays an impression of the surface and the tyre’s grip.

What of SSC? Well, ‘witchcraft’ just about sums it up. It’s almost supernatural, allowing you to drive so hard but remaining – for the most part – invisible. The system uses the e-diff to help manage the slide, where as SSC 2 (Slide Slip Control 2) found in the 488 GTB utilises the rear dampers for even greater control.

> Click here to read our review of the Ferrari 488 GTB

At £208,000, the Speciale cost more than a McLaren 12C when new – which with 616bhp from its twin-turbo V8 still manages to outgun the Ferrari. The Speciale was also around £30,000 more than the standard 458, and although that sounds like a lot, the difference in feel and overall composure is quite marked.

The Speciale’s vast array of electronics are incredibly complicated but the aerodynamic solutions utilised to meet the divergent aims of decreased drag and increased downforce have a delightful simplicity of execution. Centrally mounted at the front are two moveable vertical flaps, which sit above a moveable horizontal flap.

At speeds below 105mph the flaps remain closed to channel air to the radiators. The force of air pressure opens them at 105mph, reducing the volume of air to the radiators and cutting drag. At 137mph the horizontal flap is forced downwards also due to air pressure, which redirects the airflow and leads to a 20 per cent shift in overall downforce towards the rear of the car for the optimum high-speed aero balance. Clever stuff.

If the Speciale wasn't, well, special enough then perhaps a one-off, bespoke, custom bodied version might just do it for you. The Ferrari 458 MM Speciale, created for a British client, only shares the wing mirrors with the standard 458 – even the windscreen is unique to the MM. 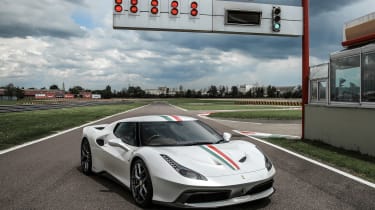 If you want one for yourself, then tough luck there is only one and all the tooling to create another is sold to the orignal buyer, along with the clay models the designers sculpted to perfect the shape. Should the person who comissoned it ever want to sell the MM, then Ferrari have agreed to buy it back for the same price the client bought it for. What that exact cost is has not been divulged, but the custom-made wheels alone cost aproximately half a million Euros to design, make and test.

> Click here to read more about the Ferrari 458 MM Speciale