2.3 petrol and 2-litre diesel options. Petrol’s power down on the best but more torque than most, with plenty of electronic tech to assist the driver 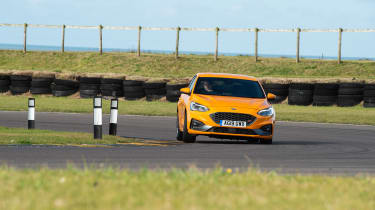 By class standards there’s a fairly big lump sitting under the ST’s bonnet, in the form of a 2.3-litre, or 2261cc if you prefer, four-cylinder turbocharged engine. That’s not quite the 2.5 litres of the old five-cylinder in the second-generation Focus ST, but with most manufacturers now using 2-litre engines and a handful on 1.6 and 1.8s, it’s bigger than many.

At the same time, the car’s outputs shouldn’t be too taxing for the 2.3, with 276bhp at 5500rpm actually less than most of the 2-litre hatches. The ST’s 310lb ft of torque is healthier though; that’s 15lb ft more than that of a Civic Type R, and 30lb ft stronger than a Golf R – all evidence of the benefits of that larger engine. 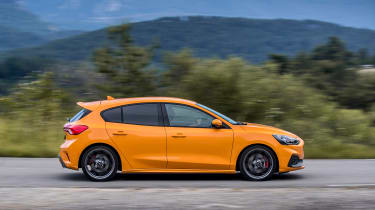 A six-speed manual transmission is standard fit (with a seven-speed auto optional), and power is sent to the front wheels alone, though there’s no limited-slip differential. Instead, you get something Ford calls Torque Vectoring Control, effectively a brake-based system to mimic the effects of a limited-slip diff.

The ST does teem with other tech though. There are the usual selectable driving modes – Slippery, Normal, Sport – and if you’ve opted for the Performance Pack with launch control, Track. The ST’s dampers are electronically controlled, and again feature extra adjustment with the Performance Pack, while the pack also adds rev-matching – though this can be turned off according to driver preference.

The ST is available in two bodystyles – a five-door hatchback and five-door estate – with the former weighing in at 1433kg and the latter 1468kg, each for the petrol model, and 1473kg and 1510kg respectively for the diesel. Wheels are 18 inches in diameter as standard, with 19s optional, and Michelin Pilot Sport 4 S tyres are standard fitment