Great engines still matter – and in evo 270, we explain why 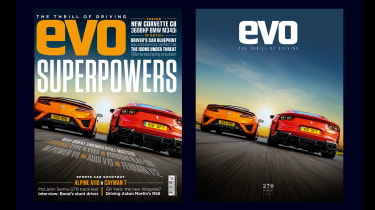 As we roar into 2020 the future of the car has never looked so uncertain. Between autonomy, electric power, and a seemingly insatiable appetite for heavy and lumbering SUVs – something surely at odds with current environmental imperatives – it’s all too easy to take a fatalist view on the vehicles we enjoy.

That’s not really our style though, so instead our February issue celebrates the very best of the internal combustion engine, all the way from screaming four-cylinder Honda motors to the blue-blooded howl of a Ferrari V12. If you still love driving cars in 2020, every one of these engines should be on your radar.

This month’s features begin on a slightly different track, though – a rougher surface, you might be inclined to say. With the brilliant news that Toyota has brought back the rally homologation special, we take our first proper look at, and indeed have our first drive of, a prototype of the Toyota GR Yaris – a four-wheel-drive, turbocharged hot hatchback with a bespoke body, all designed specifically to win in the World Rally Championship.

Then we’re into the meat of this month’s issue, with Adam Towler exploring the joy of various cylinder configurations, exploring Honda’s remarkable K20 VTEC four-cylinder, Porsche’s flat-sixes, the high-revving V8 of BMW’s E92 M3 GTS, Audi’s V10 and the screaming 6.5-litre V12 of the Ferrari 812 Superfast – plus honourable mentions for other 4, 6, 8, 10 and 12-cylinder cars. 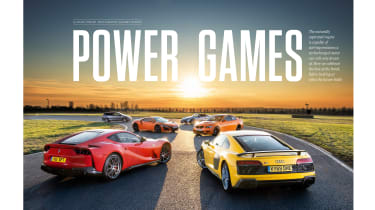 A pair of sixes makes up our next feature, pitching a representative from the traditional way of doing things, the naturally aspirated 4-litre flat-six of Porsche’s 718 Spyder, with a more modern take on the six-pot in the form of the hybrid Honda NSX. They might not be natural rivals, but each shows there’s value in six cylinders.

Next up is something we’re calling the evo Blueprint – a potential antidote to ever heavier, ever more powerful performance cars whose characteristics can’t be exploited on public roads. John Barker first chooses the cars that do and don’t hit our own bullseye, before exploring exactly what it is that we need, and what ingredients make the best driver’s cars, from steering feel to supportive seats.

Two bullseye cars – Alpine’s A110 and Porsche’s 718 Cayman T – then go head-to-head in the Yorkshire Dales, perfectly illustrating how compact forms, light weight, responsive engines and tactile steering all make for a better drive. Neither car makes more than 300bhp, yet both are capable of providing more fun than virtually anything else on sale. Adam Towler referees.

We then have Richard Meaden’s take on 2019’s Race of Remembrance at Anglesey Circuit in Wales, and the stark contrast of Jethro Bovingdon’s verdict on the brand new, mid-engined Chevrolet Corvette in a much warmer California. 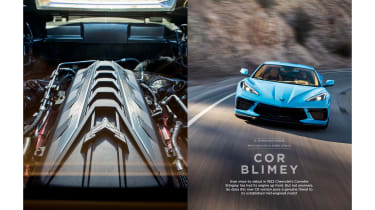 After that, it’s one of the most iconic rally cars – and most familiar co-drivers – of the 1990s, as we talk to Nicky Grist about his pristine Group A Toyota Celica. Then this month’s features round out with part one of The evo Encyclopedia, Richard Porter’s handy guide to the world of motoring. Letters A and B appear this month.

Things don’t stop there: we also have first drives this month of the McLaren Senna GTR, a prototype of the Aston Martin DBX (perhaps the first exception to the SUV rule?), a drive in the BMW M340i xDrive, and the arrival on our Fast Fleet of the 340i’s baby brother, the BMW M135i xDrive.