With a renewed sense of optimism, evo 276 has arrived with Turbos, reformed British heroes and a P1 in the Pyrenees 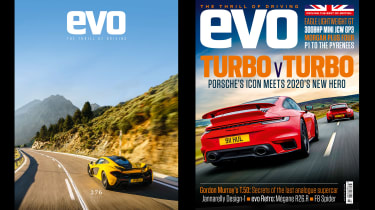 The latest issue of evo magazine is in the shops and available to download now, and if travelling to your local retailer isn’t possible you can also order a single copy from magsdirect.co.uk.

It’s a great time for the enthusiast driver right now. Our world has started spinning once again, and although there are still great challenges ahead our first issue out of lockdown has certainly been helpful to blow away some of the cobwebs, starting with our highly anticipated experience of the new 992-generation Porsche 911 Turbo S.

It’s easy to lose sight of what makes the Turbo S so enticing when the name appears across the entire Porsche model range, but as Richard Meaden finds out in our headline feature, the 992 Turbo S has more than a few reasons to be seen differently. Packing the biggest jump in power and torque between single generations in its near 50-year history, the new Turbo S is about more than figures: there’s a tangible sense it’s regained some of the magic from its illustrious past. Dickie even brought along a very special 930 Turbo in a matching hue of Guards Red for good measure. 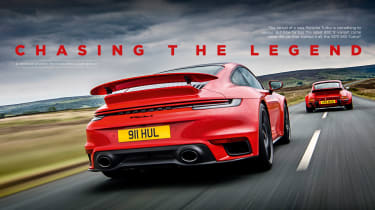 To whet your appetite for your next jaunt onto the continent, Jethro Bovingdon recalls the moment hypercars broke that glass ceiling of turning to volts as much as turbos for ultimate performance, so took McLaren’s original P1 hybrid hypercar to the Pyrenees (pre-lockdown) to try to recapture what had made it such an impressive project seven years earlier.

We also take a look back at two reformed British icons that, in their own ways, hark back to the great British sports car but in contemporary packages. Morgan’s new Plus Four is one of those greats, taking a nostalgic view of the sports car but consistently reforming it to maintain period aesthetic appeal in 2020. Closely related to the Plus Six that starred in eCoty 2019, but with a smaller and lighter four-cylinder powertrain, Henry Catchpole puts the new Morgan Plus Four through its paces. Taking a rather different approach is Eagle, who once again has taken the form of an artfully resto-modded Jaguar E-type to the highest standard 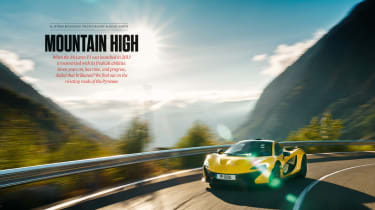 evo 276 also features our new regular series’ – Behind the Lens is where we go for a photographer’s perspective of evo’s 21-year history, and evoRetro, where we journey back in time and experience what many recall as modern classics, and the effect this transformative period of development had on the performance car.

This is in addition to our packed Driven section, where we take on Ferrari’s new F8 Spider, Lamborghini’s Huracán Evo RWD, and a new player in the lightweight sports car world called the Jannarelly Design-1, plus all our regular bits including the ruminitions from our columnists, John Barker’s latest evo Blueprint series, Richard Porter’s evo Encyclopedia, and check back into the Fast Fleet, introducing some new wheels and blowing away some of the post-lockdown cobwebs on our others. Strap in, evo 276 is a big one 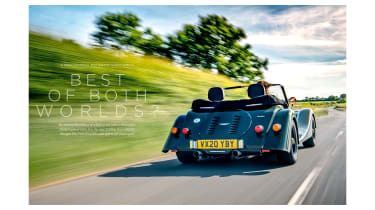