Mixed feelings as our Mazda RX-8 goes back 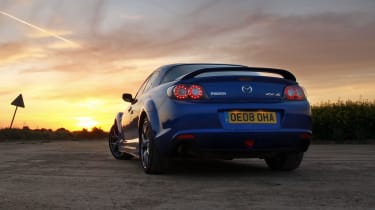 How fitting that my last drive to the office in the RX-8 was also one of the best runs I’ve had along my back-road route to work in months: clear skies, dry roads and, best of all, no dawdling Renault Modus or Nissan Note acting as a pace car through that three-mile section with the fabulous sequence of 20-something no-two-the-same corners.

It was the perfect drive to leave the Mazda on, because it reminded me of the things I loved about the RX-8 most: the constant stream of feedback from the steering, the mechanical feel of the gearshift, the confidence-inspiring brake pedal, the delightful balance of the chassis. These are the kind of ingredients that make for a great drivers’ car, and I could never get enough of what the RX-8 had to offer on those fronts. Sat low in the race-seat-snug Recaros, the front wings rising up in front of me, I often found myself completely and utterly immersed in the task of driving. It was that kind of car. It rewarded effort on the driver’s part (and equally punished a lack of concentration with slightly clunky progress), while the high-revving, 228bhp rotary engine and short gearing encouraged you to get involved rather than pop it in top and cruise.

And there was no need to be afraid of getting stuck in, because the RX-8, much like a certain other sporty Mazda, is never intimidating. You can lean hard on the car in every bend, sometimes even feeling the R3’s limited-slip diff shuffling torque from side to side, but you’re never going to scare yourself, not with sticky Bridgestone rubber and only 156lb ft of torque.

So if I enjoyed driving the Mazda so much, why have I spent the last few months trying to avoid going anywhere in it? Put simply, it was because the RX-8 was just too darned expensive to run. Regardless of whether I had the Wankel wailing to the 9000rpm red line at every opportunity or drove around like there was a raw egg loose on top of the dash, it never failed to average around 20mpg over a tank of fuel. At least this meant I could always drive the Mazda how it preferred to be driven without worrying about incurring any significant additional financial penalty, but as one canny former owner on the forums at evo.co.uk pointed out, the RX-8 just isn’t fast enough to be as uneconomical as it is. It’s true. Even our recently departed Evo X FQ-360 long-termer – a car with a reputation for liking a drink if ever there was one – used slightly less fuel, and it was properly ballistic to boot.

It’s a great shame, because Mazda’s rotary engine has a lot going for it. It’s a light unit, and its compact size allows it to be positioned low down and far back in the RX-8’s chassis, all of which contributes to the car’s perfect 50:50 front:rear weight distribution. Put a V6 in there and it just wouldn’t be the same. And as a whole package Mazda’s coupe is a very likeable thing. Many RX-8 owning evo readers have been in touch in the past few weeks, and all of them are passionate about the car, praising its handling, its practicality and its uniqueness. But never its thirst.

So should you cross the RX-8 off your coupe shortlist? Well, possibly not. You see, one good thing that’s come out of the UK Scrappage Scheme is that, if you’ve got a suitable old shed to trade in, Mazda will currently let you have a whopping £6000 off the RX-8 in fully loaded R3 spec. That means you could be driving a car just like this – complete with body kit, 19in dark titanium alloys, 20 per cent stiffer Bilstein dampers, slippy diff, Recaros, auto wipers, auto xenons, cruise control, climate control, Bluetooth and a nine-speaker Bose audio system – for less than £18,500. That’s a lot of car for the money.

The announcement of this deal also suggests that you might not have to pay full whack even if you’re not buying through the Scrappage Scheme. But let’s say you can secure that full six-grand saving. That’s the equivalent of getting your first 26,000 miles’ worth of fuel for free. And with free petrol, the RX-8 suddenly becomes a whole lot more appealing again.