Not perfect, but stunningly capable and really, really fast; the MP4-12C didn’t connect emotionally, but moved the game on like few others 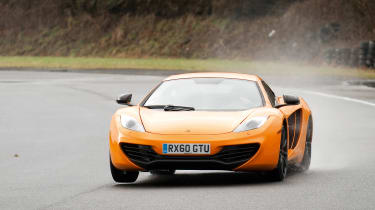 McLaren: a household name in the supercar business in 2018, but it wasn’t long ago that the company was associated with Formula 1 wins, and not world-class supercars for the road. The MP4-12C, launched in 2011, kicked off McLaren’s road-car business, and was designed to revolutionise the supercar genre, just as it did to hypercars nearly two decades before with the F1, this time pushing the boundaries not only in performance, but also its usability.

Its exotic, inter-connected dampers eschewed the need for traditional anti-roll bars, it had a ‘mono-cell’ carbonfibre tub chassis and bespoke twin-turbocharged V8 engine that brought about shocking performance figures in a supercar that was less expensive than a Ferrari 458 Italia. This was no McLaren F1 successor in terms of price, but it was just as revolutionary.

The problem was that aforementioned Italian supercar, perhaps at its own high-point in the evolution of a mid-engined Ferrari. It was slower, more expensive, less practical and less livable, and despite its on-paper compromises made the McLaren MP4-12C about as desirable as a bench-top kitchen appliance (the name didn’t help).

The early MP4-12C was far from perfect, but its spread of capability, and new technology at an accessible price point (in the context of a supercar, of course) broke the glass, or perhaps carbonfibre, ceiling at this entry point of the supercar genre, and formed the foundation of a truly spectacular dynasty of the McLaren super and hypercars we enjoy today.

At the heart of the MP4-12C was a bespoke twin-turbo V8 engine that has since gone on to feature in all McLaren road cars. Here, the 3.8-litre unit produced 592bhp, with 80 per cent of its 442lb ft of torque available at just 1900rpm. These sorts of figures may be commonly seen in contemporary super saloons, but in 2011 they were world-beating, and made the Ferrari 458, particularly its torque-lite naturally aspirated engine, feel a little weedy.

Designed with a flat-plane crank, it revved to the stratospheric heights of highly-strung rivals, but thanks to its pair of turbochargers hit with a thick wave of torque that made light work of its lithe 1300kg kerb weight. The power unit wasn’t perfect (aurally it wasn’t that exciting), and being turbocharged it lacked the razor-sharp response that usually defines supercar engines, but in terms of capability the McLaren’s engine set a precedent. 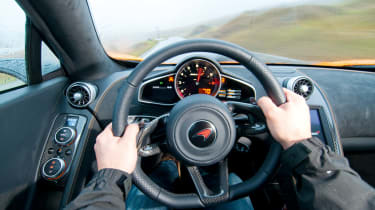 Not only did the MP4-12C’s engine set new supercar benchmarks, like its Italian contemporary it also featured a seven-speed dual-clutch gearbox. As with the rest of the car, McLaren’s Formula 1 ties shone through, as the transmission brought with it a selection of aspects that continue to be defining features in all McLaren road cars.

First were the paddles, which were connected on a rocker, giving the driver the option to push or pull the paddle in either direction to change both up and down. The paddle also featured a pre-cog system, which through two stages of movement would allow the driver to inform the gearbox with an extra layer of certainty which gear he or she wanted to select.

Furthermore, the gearbox was able to be tied into the MP4-12C’s complex traction control and brake-steer systems and able to be configured alongside the engine and chassis, softly slipping between gears or punching through them like a pneumatic racing ’box in a GT3 race car depending on where the switch was set.

McLaren’s innovation didn’t end under the engine cover, as it’s possibly the groundbreaking suspension that was the biggest departure from the supercar norm. Here, it was ostensibly a conventional double-wishbone set-up with coil springs. The twist was in the dampers, which were hydraulically interconnected and allowed the car to do away with anti-roll bars altogether by providing three levels of roll control.

Andy Sheriff, McLaren’s head of product at the time, elaborated: ‘It’s a kind of “proactive” suspension. On a car like this it’s never been seen before. It gives complete control over the level of roll on the car. You can dial in what you want from a control on the centre console: little roll, very little roll and, basically, no roll at all. And it works in a dynamic sense as well. Depending on what the car’s doing, it adjusts the roll stiffness in real time. The advantage of this is when you’re going in a straight line and you don’t need any roll control, you basically have the wheels completely decoupled so you have fantastic wheel articulation. It has the suppleness and articulation of a car that doesn’t have any anti-roll bars.’

Not only should this mean the car had the best ride comfort in its class by some stretch, it should also result in a car with grip levels and handling prowess that, according to Sheriff, were ‘just fantastic’.

The suspension was developed and tested using the same simulation program that McLaren uses for its F1 cars. As Sheriff revealed, the benefits were significant: ‘When we had our first full handling prototype, which was built at the beginning of this year, we took it to the test track, had one and a half days of shakedown and setting up the suspension and, out of the box, it exceeded our objectives. So then we set more ambitious objectives. It really worked.’

The designer behind forming McLaren’s aesthetic from the ground up was Frank Stephenson. A seasoned designer, having penned the new BMW Mini and spent time with the Fiat Group, Stephenson was brought on board to form the aesthetic that would go on to underpin a whole suite of mid-engined super and hypercars.

The MP4-12C was criticised for being a little underwhelming to look at when it was launched, but like the car underneath, it was just the first step in McLaren’s growth as a road car manufacturer. Inside, a minimalist approach was applied, with the driver and passenger sat close together due to the carbonfibre tub and McLaren’s desire to centre the weight in the cabin as much as possible. As a result, the centre console was very narrow, informing McLaren’s use of a bespoke portrait-layout infotainment system called IRIS.

In contrast to Ferrari, which moved all of the usual stalk functions (lights, indicators, wipers etc) to the steering wheel, McLaren took the opposite approach, leaving the steering wheel clear of all controls. To control the different drive modes, McLaren placed two rotary dials at the base of the console, one controlling the powertrain, and the other the chassis. Designed to give drivers near-infinite control over the car’s different components, it was a complex, albeit clear way of adapting the McLaren to whatever situation it was in, whether driving to the shops, or Silverstone. Like many other elements of the MP4-12C, this sounds relatively commonplace now, but was a groundbreaking element at its launch.

‘The MP4-12C operates in a different speed zone to virtually every other car out there. The 442lb ft available from 3000 to 7000rpm leaves you slack-jawed at the car’s ability to fashion crazy speedo numbers from the most innocent jabs of right-hand pedal.

‘Within three laps of McLaren’s test track my mind is comprehensively blown. To feel the different levels of roll stiffness in Normal, Sport and Track configurations, to experience the freakish speed the car will carry into slow, technical turns – actually, make that any braking zone that requires some steering angle – is to realise that McLaren has altered the fundamentals of sports car dynamics.

‘We move to flooded Welsh moorland roads. The conditions would tax an Audi RS4, so I just can’t believe the way this car dismisses the mayhem. Its P Zeros slice through deep water and the ride comfort is superb – only an E-class on air suspension and small wheels could match it.

‘What the 12C trades in traction to four-wheel-drive machines, it more than claws back through its resistance to cambers, its vast wheel travel and its spooky indifference to any flavour of bump. This truly is a car built to excel on UK roads, and we should be hugely grateful; you can use so much of that 442lb ft of torque so much of the time.’ (evo 155)

‘I have had sports cars as my daily drives for the last 15 years. After an Elise, Noble 3R, several Porsches, Gallardo and Aston V12 Vantage, I was firmly decided to get a Ferrari 458. A trip to the local dealership left me very disappointed with the build quality and I could not see how such a car would cope with daily usage. However, in the corner of the Italian supercar dealer was a McLaren 12C. I only had to sit in it for five minutes to know this was the car I wanted.

‘It took a couple of months to find my ideal spec – subtle colour, sports exhaust, carbonfibre interior and super-lightweight wheels. I settled for a dark blue 12C with less than 6000 miles on the clock. After 14 months of ownership and a further, virtually trouble-free 15,000 miles, including a trip to Le Mans, I have been thoroughly impressed by the 12C’s unique blend of talents. It is as fast as anything road-legal, and yet comfortable and practical enough to be a true daily-use car. I just love the driver-centric cabin. The quality of the materials and the purity of the design make it a very special place to be.

‘Minus points? IRIS 1, which was originally on my car, cannot do two things at once and drove me crazy. Software upgrades don’t help and you have to invest in the IRIS 2 hardware. Servicing and especially the extended warranty are very expensive, even more so than with a Ferrari. And I have found myself having to argue to get things covered.

‘But the reaction to the car is incredible and you can sense the respect for McLarens in the UK. I also think the 12C is a much more timeless design compared with the 650S, and will become a true McLaren icon in years to come. I usually change my cars every two years, but I might well keep this one for much longer!’