The 718 Porsche Boxster GTS has ditched the four-pot for the Cayman GT4's six, and the results are as good as we were hoping 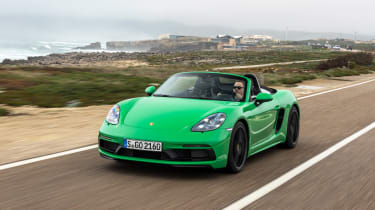 Turning the latest 911’s 3-litre turbo flat-six motor into an atmospheric 4-litre for the GT4 and 718 Spyder was not a cheap project for Porsche to exact. But the upshot is that to make the economies of scale work, both the Boxster and Cayman GTSs now get this exact same engine as well.

Which means the Boxster GTS is back with a bang, costing £65,949 and with a proper engine mounted behind its rear seats this time, not a curiously uncharismatic flat-four turbo. And it really is some engine. The only difference between its installation here and in the Spyder/GT4 is that you lose 200rpm at the top end, which means you lose out on 20bhp overall. Big deal.

Despite not revving quite as high as in the GT4, in reality the Boxster GTS really does use exactly the same engine as its eight-grand-more-expensive big brothers, and it’s attached to the same six-speed manual gearbox. A seven-speed PDK will become available at the end of the year, by the way, and will account for over 80 per cent of sales in the UK, reckons Porsche.

The chassis, on the other hand, is not the same at all because you don’t get the Spyder/GT4’s rose-jointed front end, which as you’ll know was lifted pretty much lock-stock from the GT3. Nor do you get the extra stiffening bar at the back in the GTS. Chassis and suspension-wise the Boxster GTS is therefore more of a tuned S, rather than a knocked-back Spyder, although its brakes are bespoke: bigger than those of the S, smaller than you get on a Spyder/GT4, with optional carbon-ceramics available for £5177. 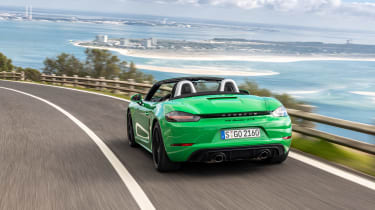 The GTS engine is a 4-litre flat-six, and it’s a heavily bored out version of the 3-litre turbocharged motor from the 992 Carrera S. In this instance it produces 394bhp at 7000rpm with a 7800rpm cut out and the same 310lb ft between 5000 and 6500rpm as the Spyder. The torque curve is also exactly the same as in the Spyder/GT4.

As intimated, the gearbox is a six-speed manual with a fractionally longer shift action than in the Spyder/GT4, but the gearing is identical, allowing 85mph in second. On a track this can make the GTS feel a touch long-geared, but on the road there is sufficient torque to pull such long gearing without serious issue.

The outright performance of the Boxster GTS is all but identical to that of the Spyder, with zero to 62mph taking a claimed 4.5sec (Spyder 4.4sec). Zero to 100mph takes a whisker over nine seconds (Spyder a whisker under nine) while the top speed is 182mph (Spyder 186mph). 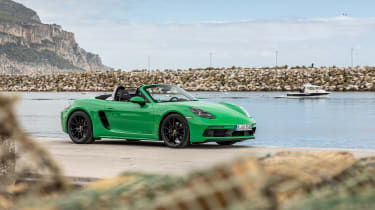 Subjectively, the biggest differences between the 718 Spyder and the Boxster GTS are the way in which their suspension systems respond, and the grip they can generate from the tyres they wear. The more expensive Spyder comes on bespoke Pilot Sport Cup 2s, while the GTS rides on regular P Zeros.

Even on the road the more conservative tyres of the GTS, allied to the different front suspension design, means the GTS doesn’t ever feel quite as pin-sharp as the Spyder, but it’s not as far off as you might imagine. It’s a little bit less focused, a little bit less manic in its responses generally, a touch more comfortable and, therefore, a fair bit more usable as a road car overall. But still with the same magnificent flat-six engine at its core.

The car we drove was fitted with the optional bucket sports seats and the carbon-ceramic brakes. These provide immense stopping power, and great feel, as does the steering, which is essentially the same as a Spyder’s. But it’s the engine that dominates the experience, providing good thrust from 2500rpm and a hair-raising noise between 5000rpm and the 7800rpm cut out.

Don’t think of the Boxster GTS as a Spyder-lite dynamically, instead think of it as a less dramatic looking 718, yes, but one that’s not a whole lot less exciting to drive. It also has a fully electric hood in place of the Spyder’s fiddly part-manual affair, which accounts for it weighing a couple of kilos more than the Spyder’s. 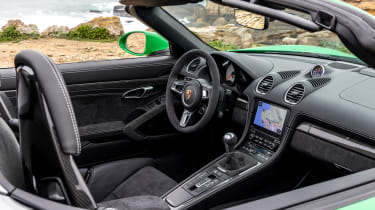 At a shade under 66 grand the Boxster GTS seems like astonishingly good value, given that it shares the same engine with the more expensive 718 Spyder, itself one of the best value sports cars money can buy. An Audi R8 Spyder costs twice as much but is no more engaging to drive. Same goes for the Mercedes AMG GT Convertible. And if you think the slightly cheaper BMW Z4 is anywhere near the same league as the new flat-six Boxster GTS, think again. Truth is, at this money the GTS has no serious rivals.

So here’s the bottom line. Unless you value the Spyder’s bespoke looks at eight grand more and are going to do lots and lots of trackdays, the Boxster GTS is so similar to it dynamically, and is so good to drive in isolation, it has to be the better value car, maybe even the better car full stop for pure road use. To all intents it feels like the same car from behind the wheel, give or take the last five per cent of the dynamic envelope. And that makes it quite some sports car at a mere 65 grand.